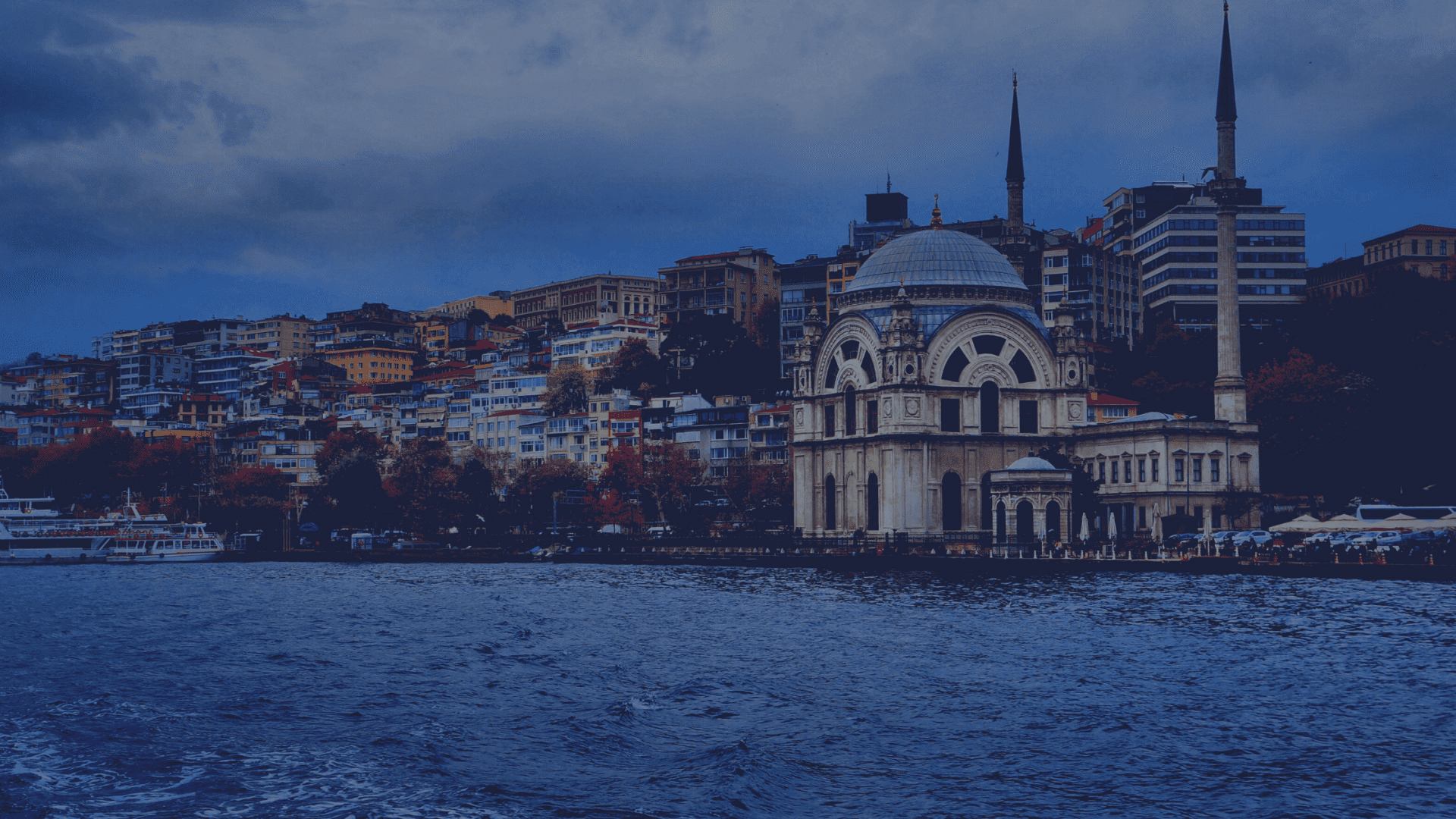 Tramming through Istanbul in 12 Hours

Istanbul is a city that cannot be experienced in a day…. But for those who have a brief stopover and have already witnessed the rich heritage of the famous district of Sultanahmet that is home to the remarkable Blue mosque, Hagia Sofia and Grand Bazaar, the guide below is an alternative way to see this vibrant city through the easiest mode of transportation in good old Constantinople – Tramming!

It’s 8am and outside your hotel window, you see monuments, mosques, minarets, and churches, pebble paved streets, trams, people hurrying about and you are trying to absorb everything in. You may gasp in wonder, you may frown at traffic, you may have questions on your mind but all you think about is heading out and experiencing its amalgamation of culture, ancient history, scrumptious food and some of the friendliest people you will ever meet! 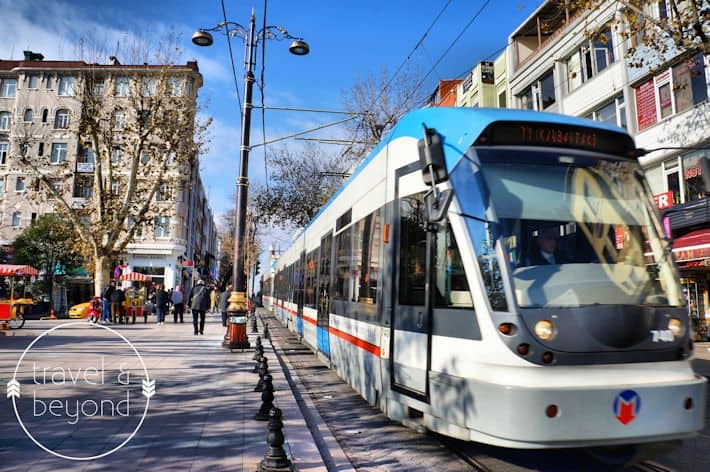 10am Start the day with tram ride to Eminönü to marvel at the beauty of the New Mosque and Galata Tower across the Golden Horn – a narrow freshwater estuary which snakes through the two European sides of the city and comes out at the Marmara Sea. Stroll around the open plaza in front of the New Mosque and the entrance to the Spice Bazaar to get your bearings. 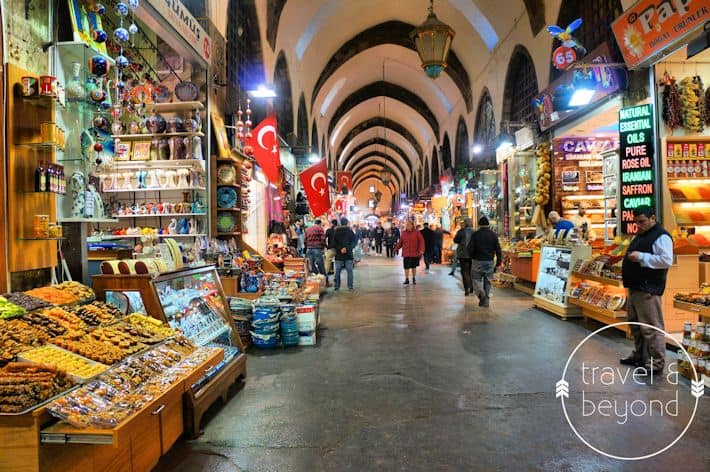 10.30am A few photographic moments later, enter the Spice Bazaar (Mısır Çarşısı) also known as the Egyptian Bazaar. Constructed during the 1660s, the L-shaped shopping arcade is home to about 90 shops that sell spices, figs, Iranian saffron, walnuts, pistachios, apple tea and the famous Turkish Delight. You will also find copper pans, tulip-shaped tea glasses, and ironically enough, Indian pashmina shawls. Bargaining skills is a must. (Open Monday to Saturday from 8am to 7pm, closed on Sunday). 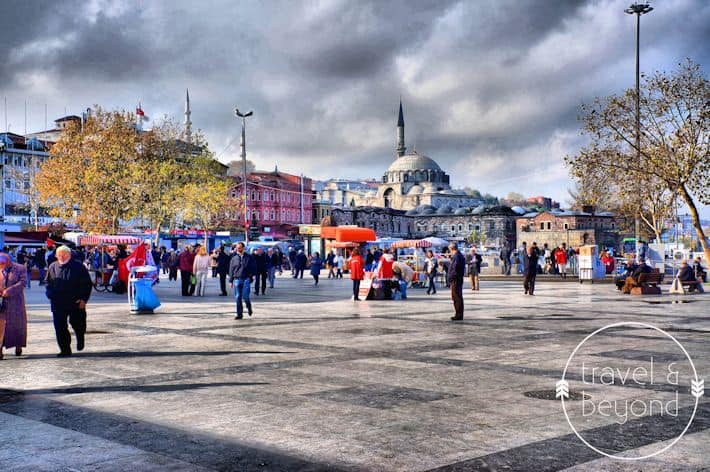 12.30pm Now back outside in the plaza, sample some traditional Istanbul street food like Simit, a crisp, ring-shaped, savoury roll covered with sesame seeds or Açma, a savoury soft bun that’s a bit oily and looks slightly like a doughnut. You will find these sold by push-cart vendors outside the bazaar or its nearby surroundings. Down these with hot Turkish black tea called Çay. 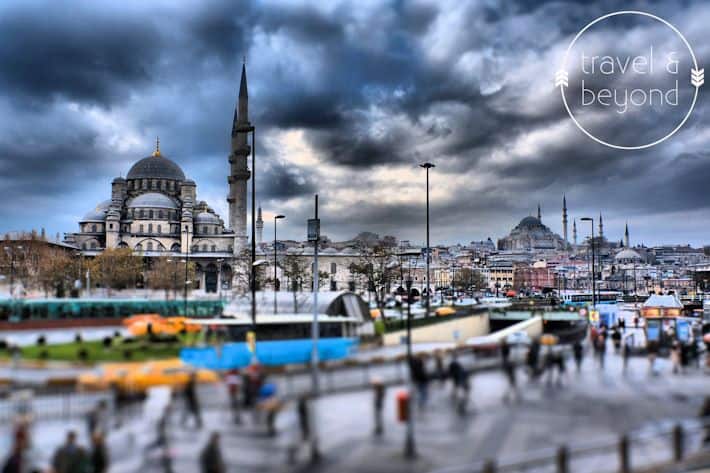 1pm Next, head to the nearby New Mosque (Yeni Camii), an Ottoman Imperial Mosque. Casting a massive shadow over the Spice Bazaar, the New Mosque boasts sixty-six domes and semi domes in a pyramidal arrangement. Construction of the Mosque began in 1597, commissioned by Sultan Mehmet III’s mother, Valide Sultan Safiye. However, following the death of the Sultan and several other setbacks, it was left idle for many years until finally being completed in 1663. The beautiful interiors are worth a visit during non-prayer times. If you find yourself without a covering, there are scarves on hand for female visitors and plastic bags available for shoes. (Open daily from 7pm to dusk). 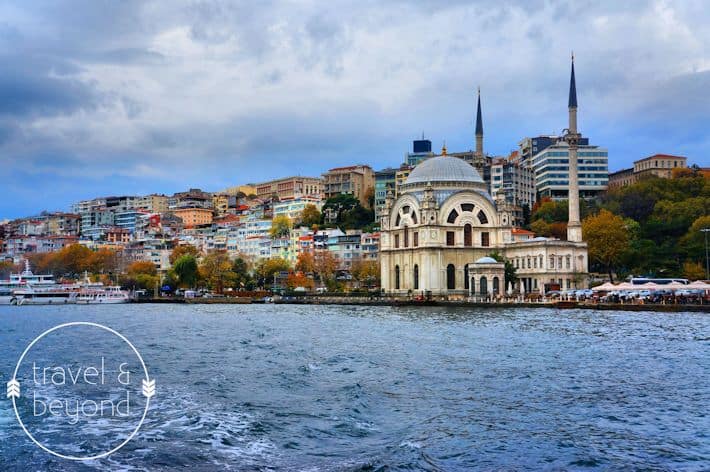 2.30pm Cross the road and tram lines and head to the ferry docks and board a two-hour Bosphorus Cruise for a leisurely taste of the city that straddles two continents. Home to some of the most beautiful structures that boasts tranquil waterside gardens, mosques and landing jetties, the Bosphorus is considered the world’s narrowest strait used for international navigation. Select the Short Circle Bosphorus Cruise (Kısa Boğaz Turu) that takes you from Eminönü to Istinye and back. This cruise is great for people who are pressed for time but don’t want to miss a genuine Bosphorus experience. Try some Turkish coffee while on board. Tickets cost approximately 10 TL. (Available every day in summer from April 1st to October 31st, check timings here) 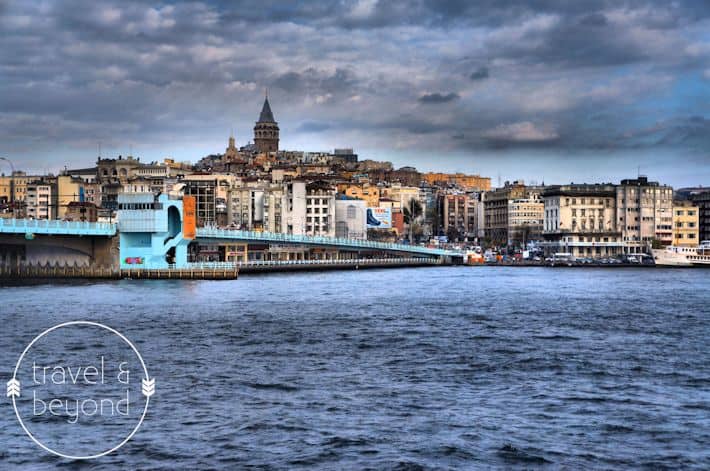 5pm Once back at the docks, walk back to the tram station at Eminönü and take a ride to the next station across the Galata Bridge that spans 500 metres. Alight at Karaköy. This ancient seaport is the site of old Galata and it has been a commercial hub for centuries. It is also home to the landmark Galata Tower. Take a slow walk up the hill with clear signage to guide your way. It is a rather steep climb so be prepared. You will find many local eateries and shops along the way. A slow walk would take you approximately 30 minutes to reach the tower. 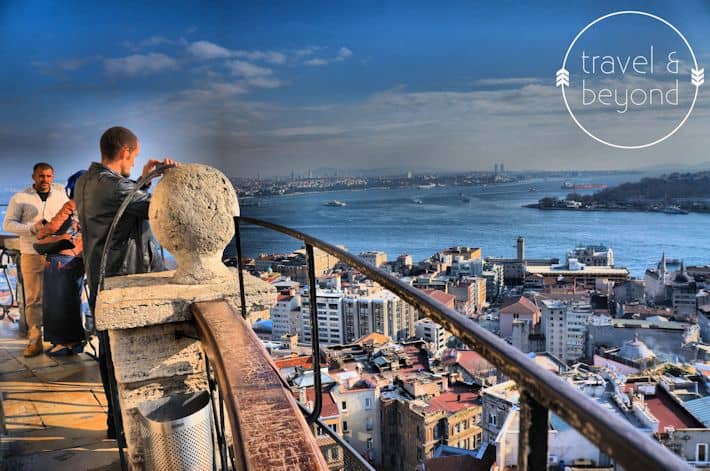 6pm Purchase a ticket and take the lift up to the top. The cylindrical Galata Tower (Galata Kulesi) with its conical cap rises high above all other buildings on the east bank of the Golden Horn thus providing a magnificent 360 degree view of Istanbul. Built by the Genoese in 1348, this stone tower was once called the Tower of Christ. After the Ottoman conquest of Istanbul in 1453, the tower became a prison and naval depot. During the 19th century it was a fire lookout post in order to quickly detect frequent fire outbreaks in the city’s mainly wooden houses. The restaurant on the top floor has lovely cakes and a must try is their strawberry cheesecake. (Open daily from 9am to 8pm. Tickets cost approximately 10 TL). 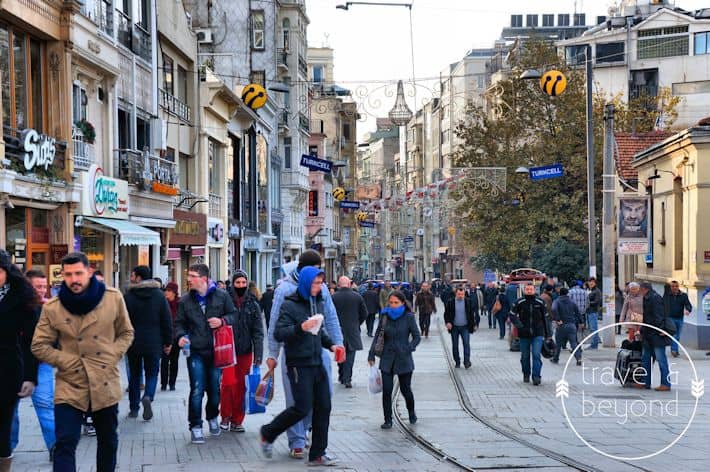 7.30pm Walk down to the tram station at Karaköy and take the tram to Kabataş where you will change over to the Funicular that heads to the famous night spot of Taksim. It is here where you will find branded international designer wears and night clubs. 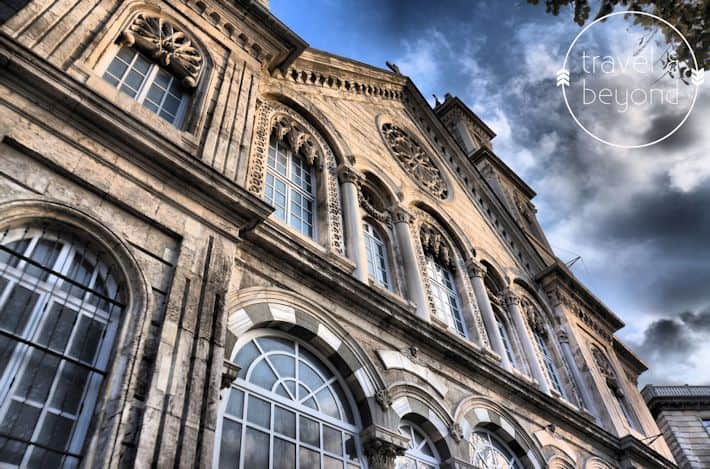 8.30pm Your first stop once in Taksim is to stroll through Istiklal Caddesi (Independence Street), arguably Istanbul’s most famous street that houses multitude of shops, cafes, bars, art galleries, restaurants, cinemas, churches, synagogues and mosques. You will come across brands like H&M, Mango, Zara and many more that you will find back home and if you’ve had enough shopping, visit one of the largest Greek Orthodox churches in Istanbul called Aya Triada Kilisesi and photograph its façade as the church is only open during service.

9.30pm Hungry? A must try is the Kızılkayalar’s Wet Burger! These juicy mini-beef patties are doused by an oily, garlic-tomato based sauce before incubating in a glass-lined heater. It may not look like much but it tastes delicious. The restaurant is rather tiny and it is better to eat standing-up out front. Even the notable Anthony Bourdain has dined there. (Open 24 hours daily, the restaurant is located at Sıraselviler Caddesi 6, Taksim Square, Cost: 3 TL). 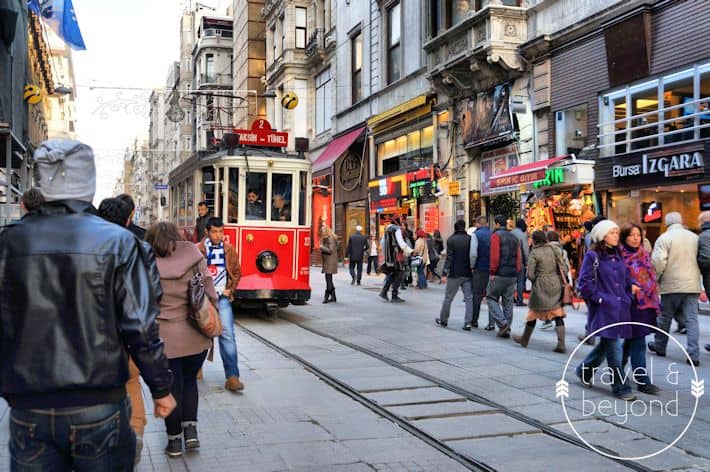 10pm You can either call it a day and return to your hotel or party the night away in one of the many night clubs situated along the Istiklal-Tünel route. You can take the nostalgic tram that runs 3km between Istiklal Street, which starts at Taksim Square and ends at Tünel. Opposite the historic Tünel station is a maze of night-life hotspots just waiting to be discovered. Asmalimescit Street and the charming cobbled lanes running off it are packed with cafes, restaurants, meyhanes and bars, each with their own unique character. Make sure to try the local drink called Raki – an anise flavoured hard alcohol. Beware of nightclubs that do not list the prices of beverages on their menus.

Tip: For easy travel around Istanbul, purchase the Istanbul Kart which can be used on all trams, trains, funiculars, buses and ferries. It is in essence an all-round public transportation boarding pass that provides a 10% discount over the normal fair. You can purchase this card at any major transit stops or even at small convenience stores. Just remember to top it up. 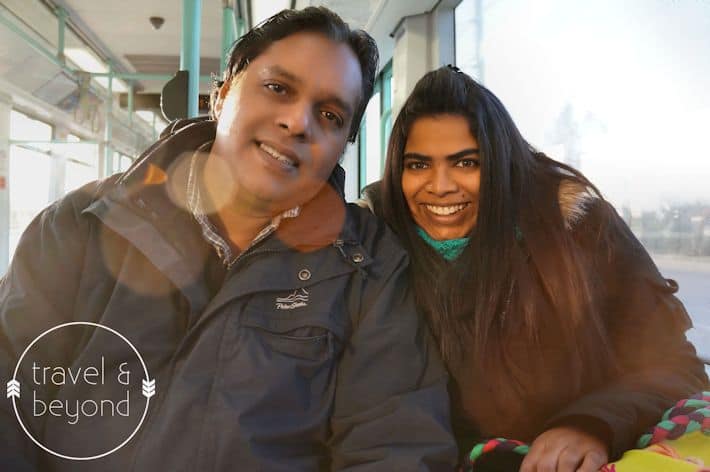 Where did your Istanbul tram ride take you?