Not Just Another Ruin – The Basilica of St. John in Selçuk, Turkey 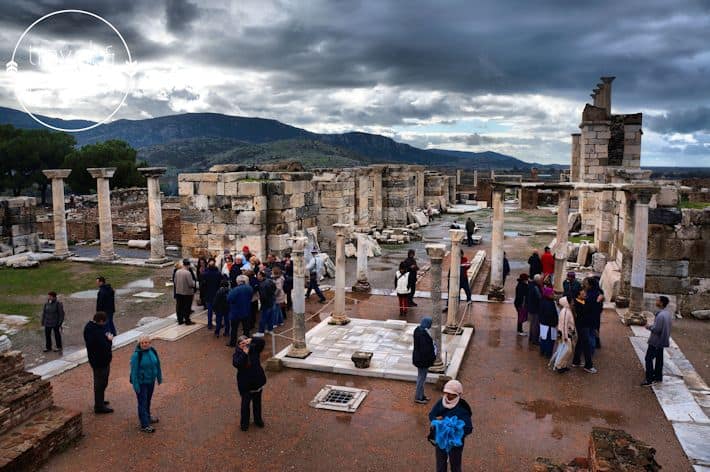 Our small tour group reached the Basilica of St John sometime late noon. The temperatures had dropped and there was a cold wind blowing with slight drizzle of rain. While the tour guide went on to describe the site, I was distracted. The ruins that stood there appeared as though it could tell its own story.

Exploring ruins are our favourite part about travelling. There is so much history steeped in the broken walls and fallen pillars of old. Walking through ancient arches transports us into a world where every passage way or structure had deep meaning.  I sense as I write this article there is going be a lot of emphasis on history as you read on.

As we strolled through the Gate of Persecution at the site where the majestic Basilica of St. John once stood on the southern slopes of Ayasuluk Hill in Selçuk, we couldn’t help but feel inspired about men, religion and their perseverance.

Built by Emperor Justinian in the 6th century, the Basilica of St. John was a great church built almost entirely of brick and stones (ashlar) while the columns would have been made of marble or have been marble plated.

Located approximately 2 kilometres north-east of the ancient city of Ephesus, the basilica stands over the believed burial site of St. John, identified as the writer of the Fourth Gospel and the book of Revelation.

This made a lot of sense as we had just visited the House of the Virgin Mary where we learnt about how St. John brought Mary to Asia Minor with him. While there is no Biblical mention of John being in this region, early church tradition strongly links the apostle to Ephesus.

It is on Ayasuluk Hill that I remembered the first verse of St. John’s gospel…

I wonder if he wrote those verses somewhere here in Turkey. The Basilica of St. John is a great place to reflect on the words of the gospel. This is best done during winter when there are no hordes of tourists around. The sense of peace and calmness the area evokes is simply beautiful. Find a spot on the hill, just sit down and soak in the moment.

Travellers who have an interest in religion may find the ruins very interesting. There is so much to the structure that has been excavated so far.

“According to the written sources, the basilica with a wooden roof which included St. John’s grave was built 300 years after his death by Emperor Constantine. As the huge basilica deteriorated, Emperor Justinian (527-565 AD) and Queen Theodora expanded and constructed instead, the six-domed church in 6th century AD whose ruins are visible today. This church, which is cruciform and measures 130 by 65 metres, was one of the most impressive religious structures built after Artemis Temple in Ephesus. Since it played an important role in the Christian pilgrimage of the middle age, it attained a status of “Church of the Cross”. According to literally sources, the structure was in need of repair in the 12th century. When Ephesus fell into Turkish hands after 1304, part of the church was converted into a mosque. A severe earthquake levelled it in 1365-70. Excavations of the church and its surroundings continued in 1921-22 by Greek archaeologist G. A. Soteriu. In 1927-30, Austrian Archaeological Institute finished the excavations on the inside sections of the church. Ephesus Museum Directorate of Ministry and Culture excavated and restored the surrounding buildings of the church and the fortification walls from 1960 to 2006. Excavation and restoration works are being conducted by a scientific team from Pamukkale University since 2007.”

The tomb of St. John elevated the church to one of the most sacred sites in the middle ages and thousands made pilgrimage here. But with the decline in importance of Ephesus, after Arab raids and finally an earthquake, the basilica fell into ruins.

The ruined church was thereafter pillaged for building materials, but recent restoration enables visitors to understand its size and visualize its former splendour. If the basilica was fully restored, the church would be the seventh largest in the world!

This ancient site was telling its own story in muted words. You don’t need to know the history to understand that these ruins were once an important place where people gathered for worshipping, and socializing.  A disciple of Christ lived in these parts and an emperor inaugurated this basilica. It was a proud place once and was later destroyed. Yet it stands today in its destruction still inspiring people who visit it. I left the place inspired and felt my soul was nourished. 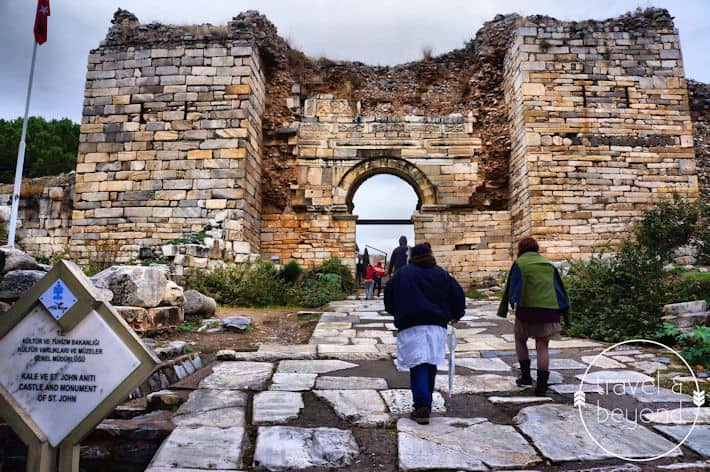 The entrance to the site – The Gate of Persecution used to have a frieze of Odysseus discovering Achilles, and when it was mistakenly thought to depict the persecution of Christians, the gate acquired its name. In the 8th century the square towers on either side of the gate were made pentagonal, aiding in their defensive capabilities. 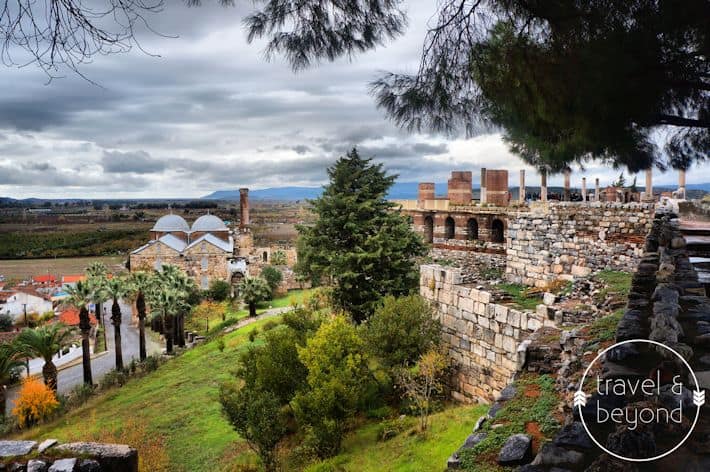 As you walk up towards the basilica you will notice the Isabey Mosque on the left which was built in 1375 at the direction of the Emir of Aydin. Columns and stones from the ruins of the city of Ephesus and the Temple of Artemis were incorporated into the building. The mosque was restored in 1934. 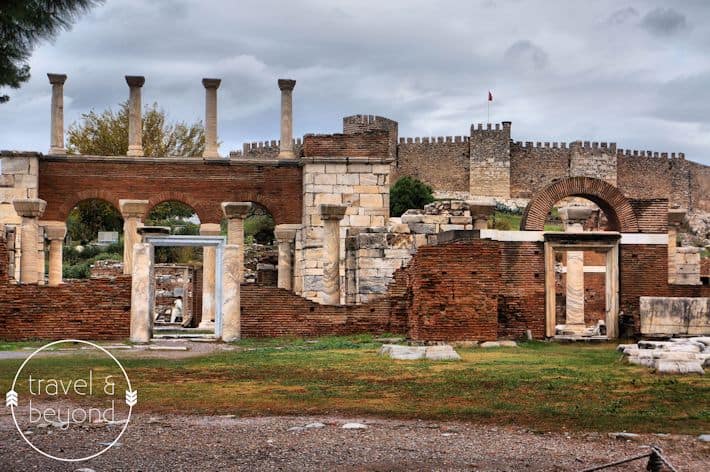 The first walls you see… 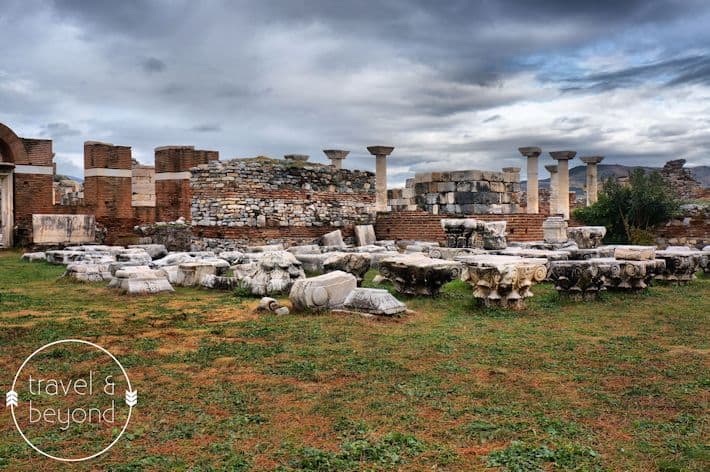 Parts of the basilica’s pillars on the ground 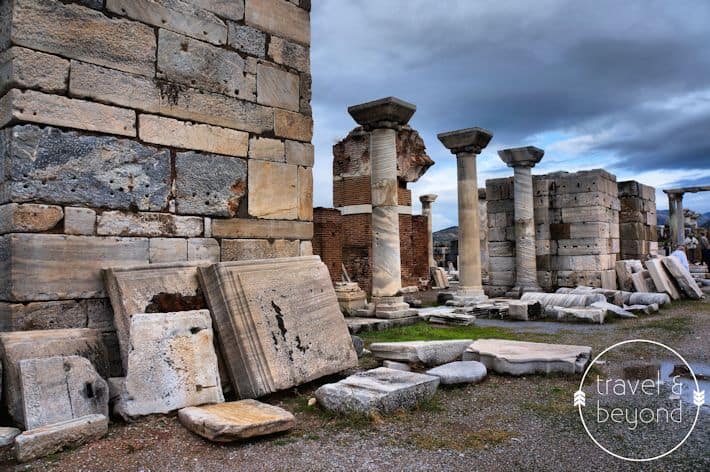 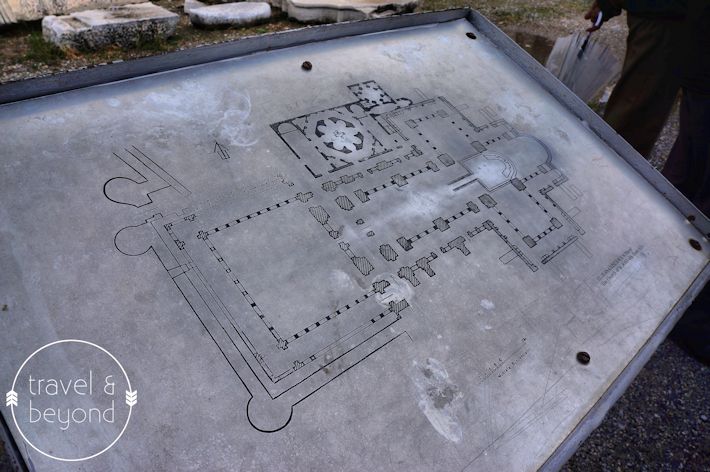 The floor plan of the church resembles that of the Church of the Holy Apostles in Constantinople, which lies under the Fatih Mosque today. 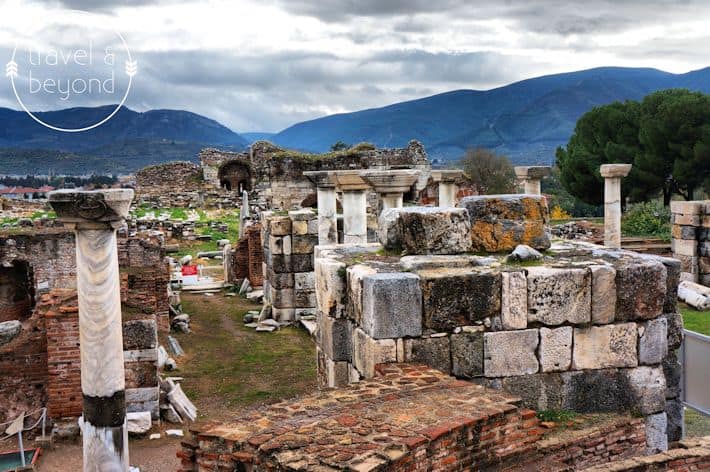 The church is cruciform in plan. The western arm of the cross has a nave and two aisles. The nave in the middle is wider and single storied. The side aisles are narrower and two storied. Following the excavations, the walls were elevated and all the columns of the ground floor and the columns of the north gallery were re-elected. 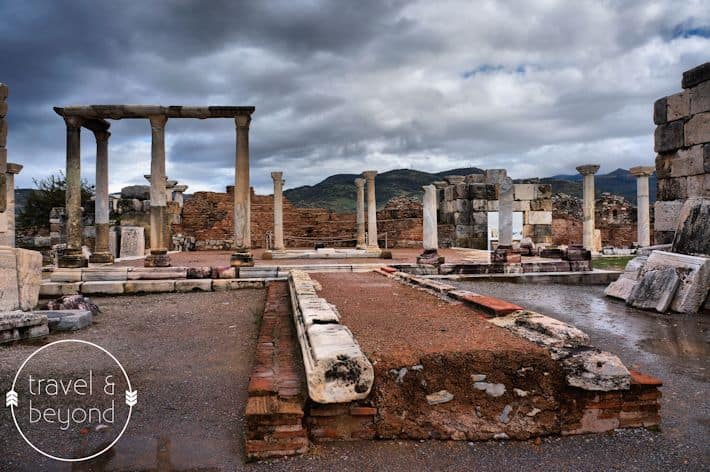 Narthex is the hall between the atrium and the main hall of the church. The word ‘narthex’ itself means ‘entrance foyer or vestibule’. Like in the other major churches, there are eight doorways opening into the narthex. The northern most one and the southern most one let the people come in from outside. 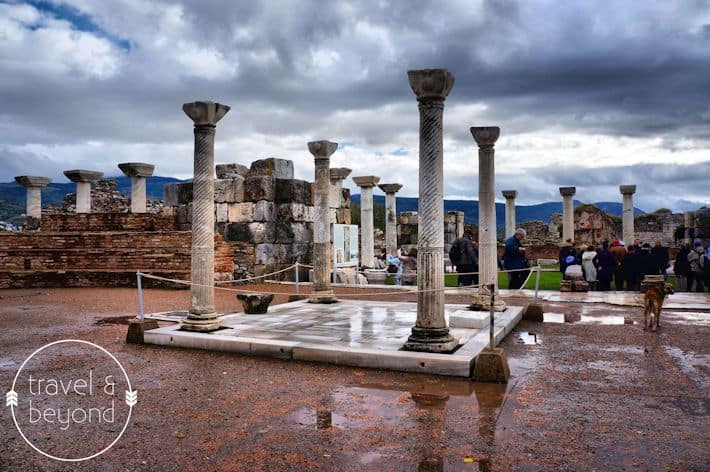 Raised by two steps and covered with marble, the tomb of St. John was under the central dome, which was once carried by the four columns at the corners. The columns in the courtyard reveal the monograms of Emperor Justinian and his wife Theodora. 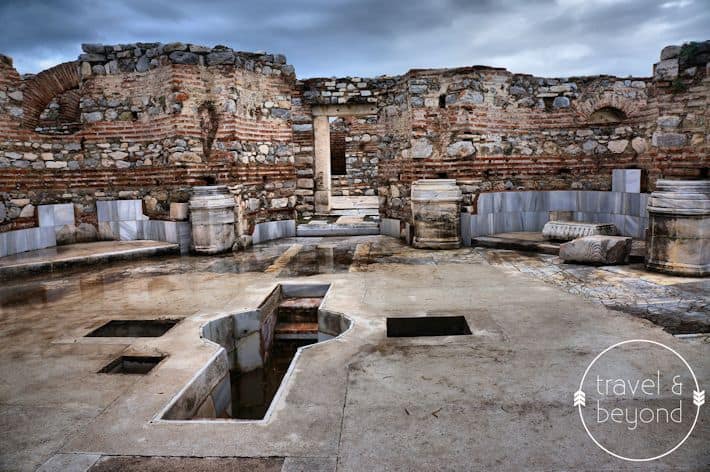 The baptistery is complex consisting of an octagonal central part surrounded by a corridor and corner rooms and flanked with apsidal halls to the east and the west. 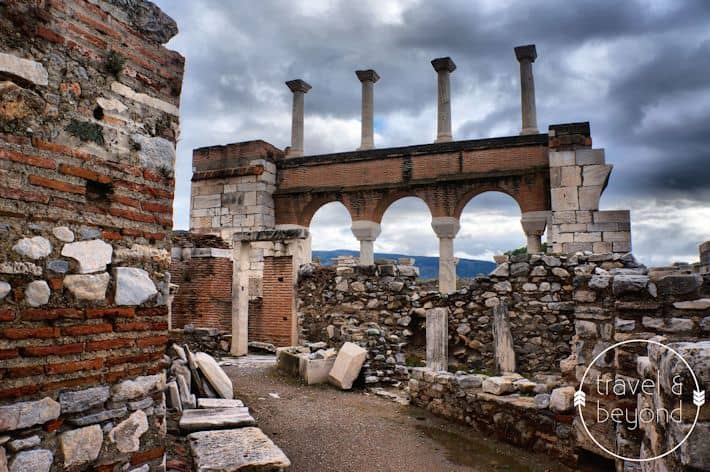 The tallest part of the entire ruins 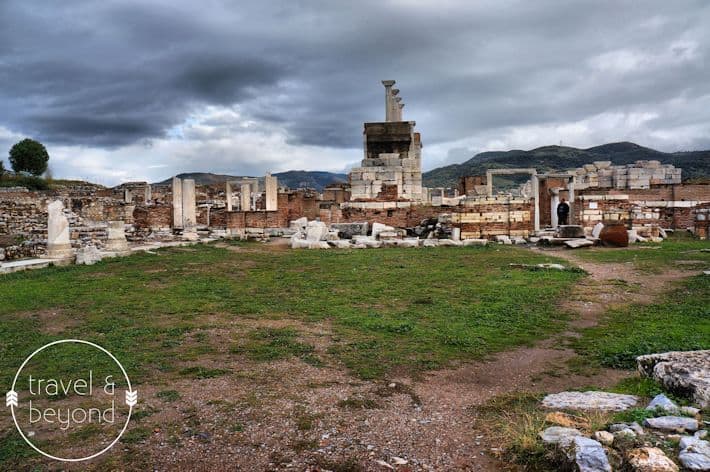 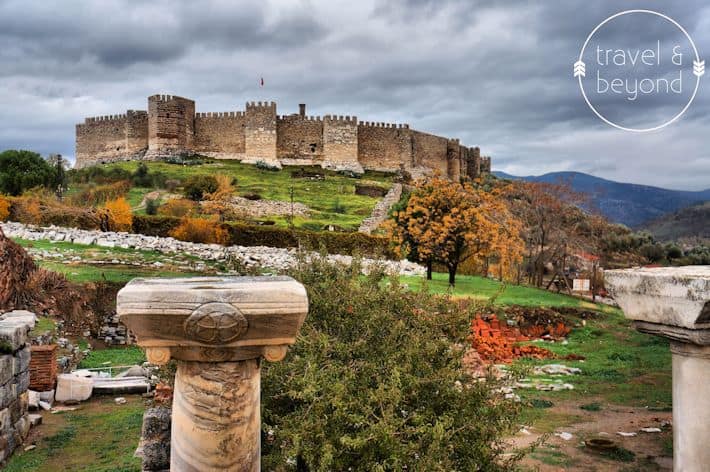 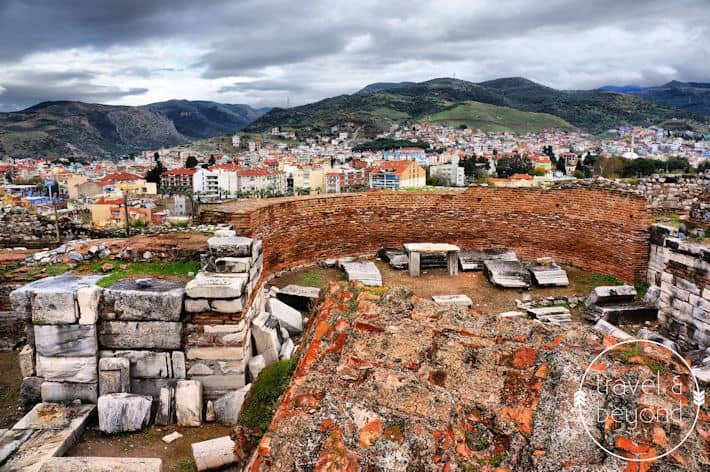 Selçuk town in the distance. 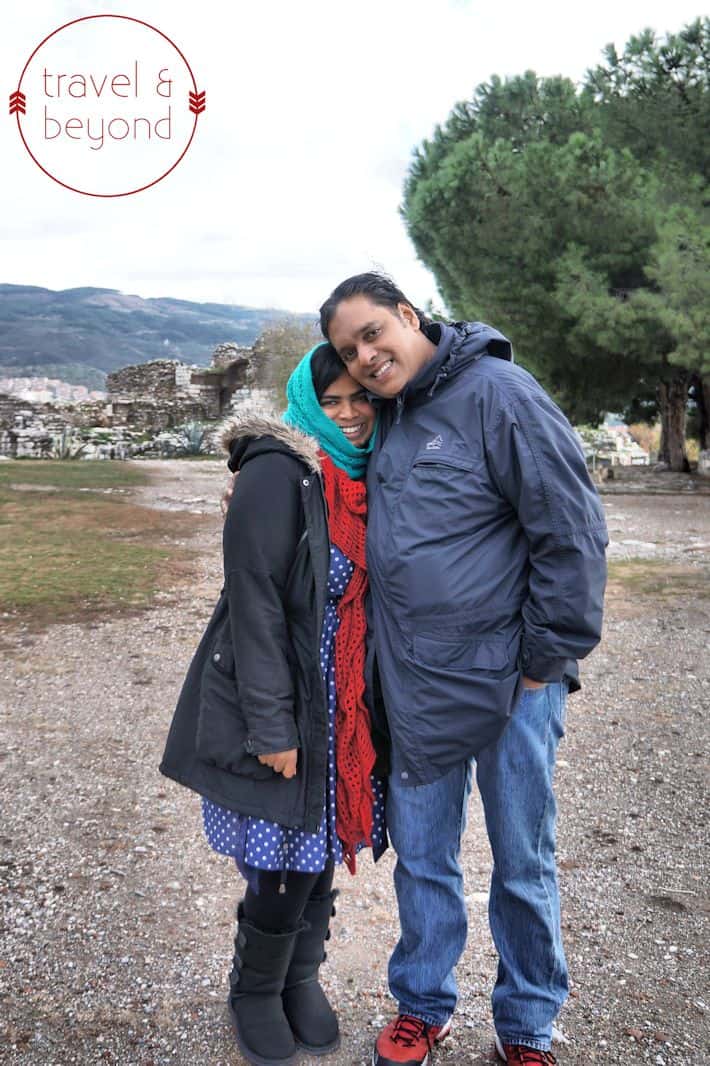 Joseph and I in the courtyard of St. John’s Basilica…