A Journey through Kyushu – Day 3 in Fukuoka 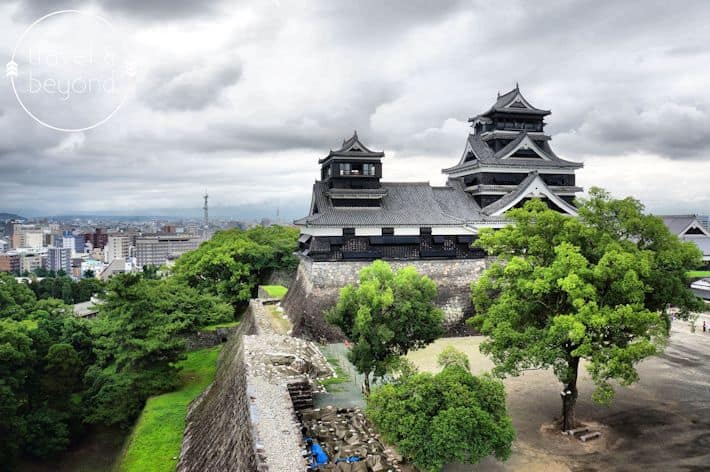 Through my slightly parted hotel room curtains, I saw the gabled roofs of the Kumamoto Castle at the crack of dawn. The early morning sun reflected off its walls gently bathing it with warm golden hues. It stood there in majestic glory, proud of an ancient past. And as I gazed at the castle, time stood still. It appeared to me that the castle was beckoning to me to come hither and listen to stories of a bygone era. But would I have the time, I wondered in dismay for a busy hectic day lay ahead of me.

It was my third day on the island of Kyushu, later I was to leave to explore what little I could in Fukuoka. But for now, this castle yonder, would give a glimpse of medieval Japan. It was an opportunity I must grab even though time was limited and so, after a quick breakfast, I set out to the castle…

The large moat that once provided the castles’ preliminary line of defence was carpeted in bright green grass, the tall fortified castle’s 13.5 m high walls were imposingly awesome. An honour of samurai patrolled the Hohoate Gate – a perfect setting to transport the visitor straight into feudal Japan. A chill jogged up my spine as I entered the castle. I felt that a feudal lord was intently watching me enter his realm. It was not unnerving but quite thrilling nonetheless. Perhaps the imposing surroundings put my imagination into an overdrive. 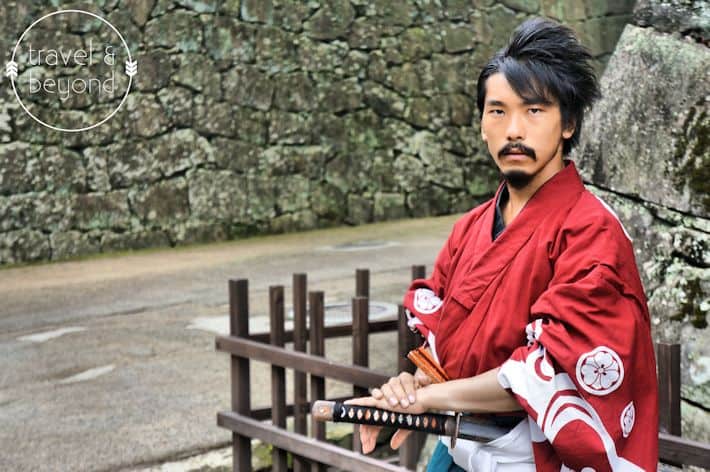 Walking through the front gate I gazed upwards at the impressive towers built by Kato Kiyomasa from 1601 – 1607. Within the 5.3 km circumference of the castle grounds, there used to be about 120 wells, 49 turrets, 18 turret gates and 29 castle gates. Though not all of the turrets are original, as some were reconstructed in 1960, they still stand as a reminder of the vision a mighty warrior had for the city that was awarded to him for his victorious battles to unify Japan.

Alas, I only had time to enter one turret called Uto Yagura. It is the only original multi-layered turret remaining on the grounds of Kumamoto Castle. Uto Yagura has three exterior layers and an interior with five floors and a basement. Composed mainly of pine wood, it was interesting to see how intact the wood was and also how steep and narrow the stairs were. It was quite daunting to ascend and descend without the fear of falling. I kept wondering how women in Kimono’s would have managed those stairs; they must have had a technique I clearly was unaware off. 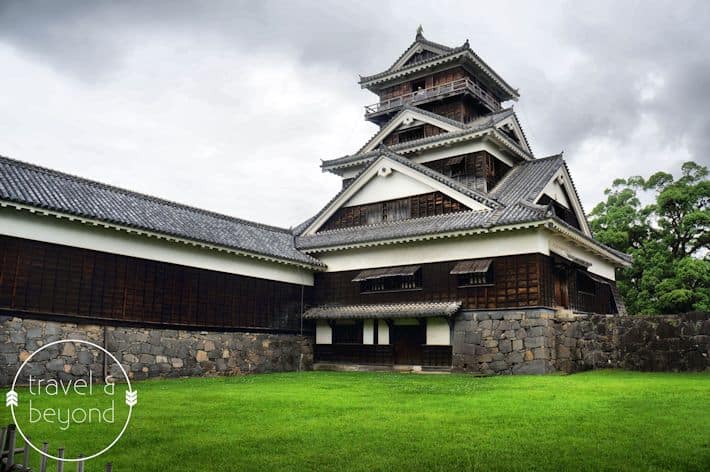 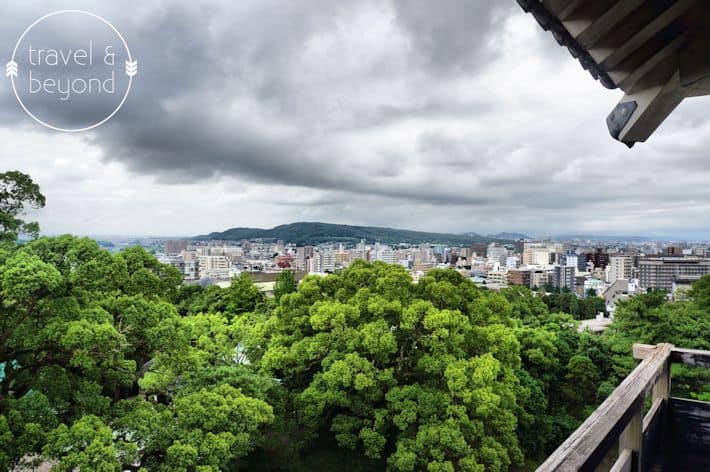 View of Fukuoka City from the 5th floor of Uto Yagura

Somehow I manoeuvred those tricky stairs to the top of the turret. Once up there the view of the city was stupefying. You could see right up to the mountains on a clear day. I was disappointed that I had no time to explore the entire castle but visitors with more time to spare can visit the Honmaru Goten Palace, the underground passageway and the Shokun Hall. If any of you have been fortunate enough to see all, do let us all know. And for those planning to visit the castle please go with ample time in hand, you won’t regret it. But I must rush now. I took one last look at the magnificent castle and hurried down to the bus.

A one hour forty minute bus ride later, I arrived in Fukuoka situated in the northern extremity of Kyushu. This is a modern city and a centre of administration and commerce in the Kyushu region. It’s also a transportation hub with air routes and railroads. Once called Hakata, Fukuoka is buzzing with activity and life is more fast-paced than Oita and Kumamoto. 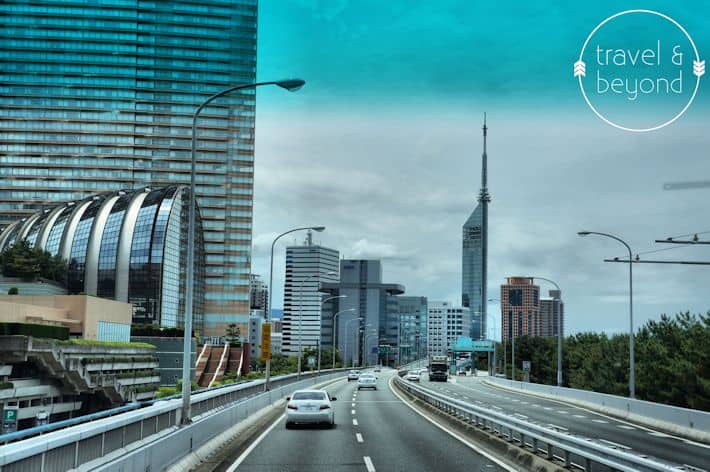 The landscape had changed once more. The idyllic countryside laden with cedar trees gave way to concrete streets lined with futuristic tall skyscrapers. We passed cargo container terminals as modern cars whizzed by. The city folk were hurrying by attending to chores and the noise of the city became apparent.

I spent two days up in the mountains amongst hot springs and volcanoes and the city suddenly sprang upon me, like a lion pouncing upon an unsuspecting antelope. Trust me; the sudden change from peaceful countryside to busy city was that dramatic! 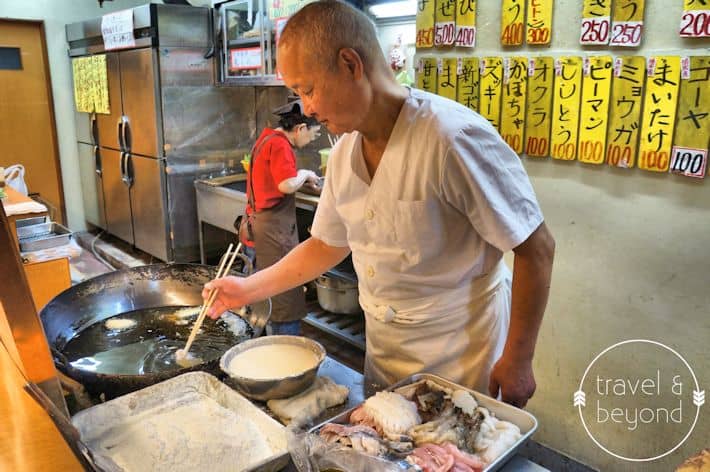 My order of seafood Tempura being fried up 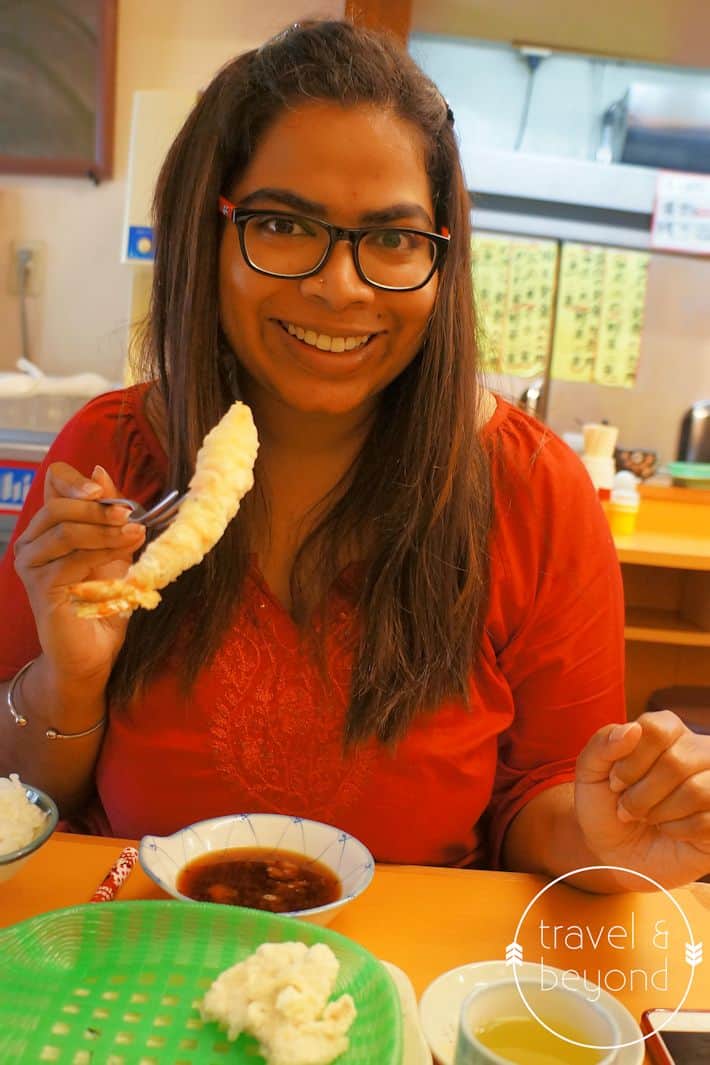 First stop in Fukuoka was lunch at Daruma for a Tempura experience. Vegetables and seafood are coated in light flour batter and deep fried and served with dipping sauces, miso soup, pickles and rice. Owned and operated by a husband and wife team for over 27 years, Nonaka and his wife serve delicious crunchy Tempura in a simple restaurant that can accommodate about 20 people.

There is nothing like trying Tempura in Japan; it tasted very different from what I have tried in Singapore or Australia . I cannot describe how fluffy, crunchy and light it was. This meal reassured me about the wonders of cities and I soon acclimatised my senses to the surroundings and felt encouraged to go explore the city. 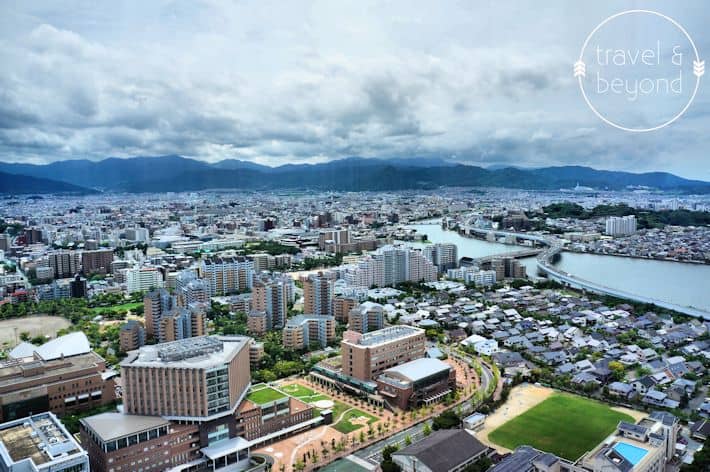 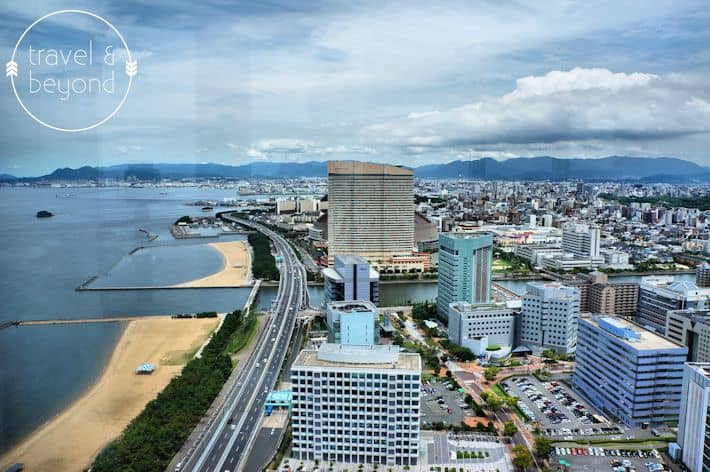 The best way to appreciate Japan’s sixth largest city is always from above and I got a bird’s eye view of the prefecture atop the Fukuoka Tower. Fukuoka is bordered on three sides by mountains and on the north, to the Sea of Genkai. Its city spreads from the base of the mountains that surround it and almost feels that it will spill over into the Sea. It’s a charming and unique city. And it has a fabulous history.

It wasn’t just another modern city; it was an ancient seaport that was attacked twice by Kublai Khan and his 900 ships! And the great Khan was defeated both times and so severe was the loss he sustained that he left Japan alone from his imperialistic ambitions. The city was defended by the samurai and two devastating typhoons which were named KAMIKAZE (Divine Winds). The great emperor Kublai Khan must have felt that he can probably fight war with men but how can he measure up to a land defended by typhoons! It’s a fascinating story and you should read it sometime.

The Japanese later built walls to thwart off further Mongol invasions and some remnants of these walls built in 1926 can still be seen today. It’s called the Iki-no-Matsubara Genko Bulwark wall or ruins as the tourism site calls it. The Mongolian Invasion Historical Museum is another fascinating place to visit to gain better understanding of the city’s amazing and miraculous resistance against Kublai Khan – Mongol warlord and the First Emperor of the Yuan Dynasty. See box below for information. 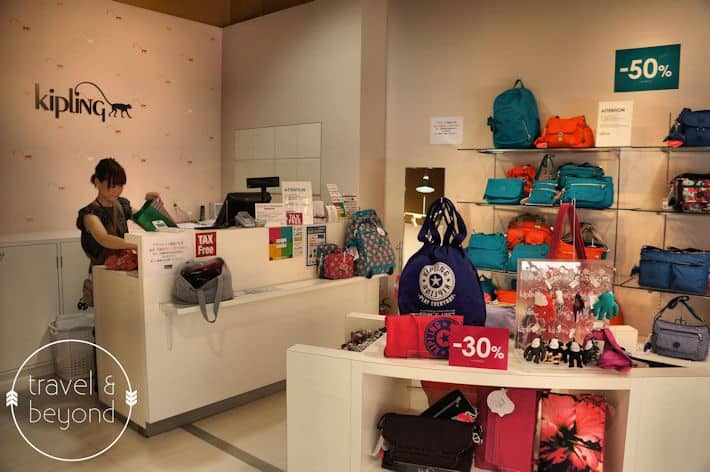 After a titbit of history, it was time for shopping. Fukuoka is famously known as a city for shopaholics. Due to the lack of time, I chose to go into 3 malls namely the Marinoa City, JR Hakata City and Canal City which were home to a myriad of stores selling discounted branded merchandise to regular fashion stores and a whole lot of other merchandise in between. I am not much of a fashion brand shopper so the only item I purchased was a psychedelic orange Kipling bag I got for a mere $40 after a 70% discount off the original price from Marinoa City. It was a decent bargain and the bag would remind me of this trip every time I use it.

Finally it was time for me to try some food in the city. Walking around these large shopping complexes can truly work up an appetite. 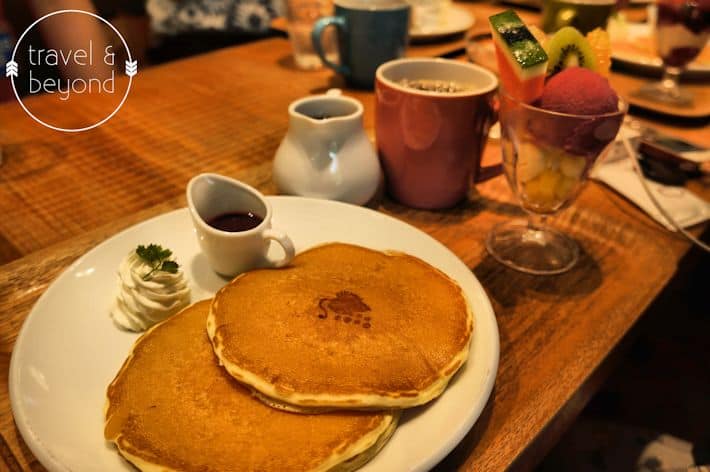 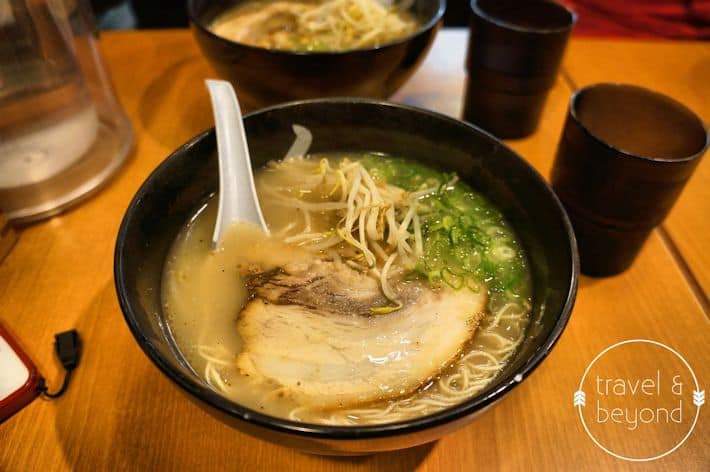 I usually start my meal with dessert first. Most people who know me find that amusing, but well that’s just the way I am. I started out with a mixed fruit pancake from Campbell Early in JR Hakata City followed by a delicious Fukuoka Ramen in Canal City’s Ramen Stadium. The best part about having Ramen in Japan is that the pork bone broth which is used as the soup base is boiled consistently over two days. The soup is rich and full of flavour. 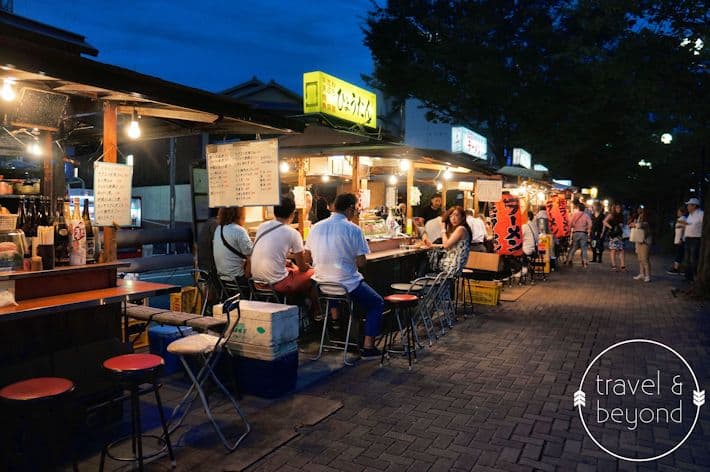 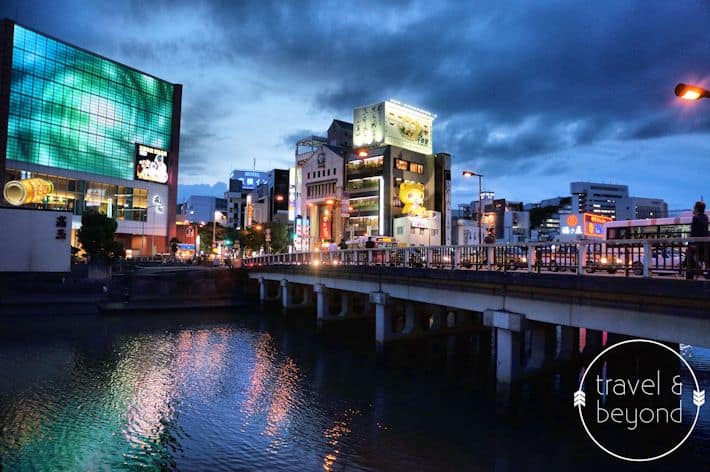 If a bowl of Ramen isn’t going to satisfy your dinner cravings, take a stroll down the river in Nakasu and try the many food options at Japanese street side stalls called yatai. The yatai’s start operation after 6pm and offer dishes like ramen, sushi, yakitori (grilled chicken skewers) and tempura. There are 10 stalls located alongside the river and it’s a great spot to sit and enjoy the city lights of the Nakasu district while feasting on reasonably priced street food.

It was about 10pm when I finally decided to call it a day. I headed to Hotel New Otani Hakata, my dwellings for the night before flying back to Australia. It is centrally located and a mere 15 minute taxi ride away from the airport. The room was well equipped, simple and clean and operates its website in English, which makes it easier if you’re trying to book a room on your own. 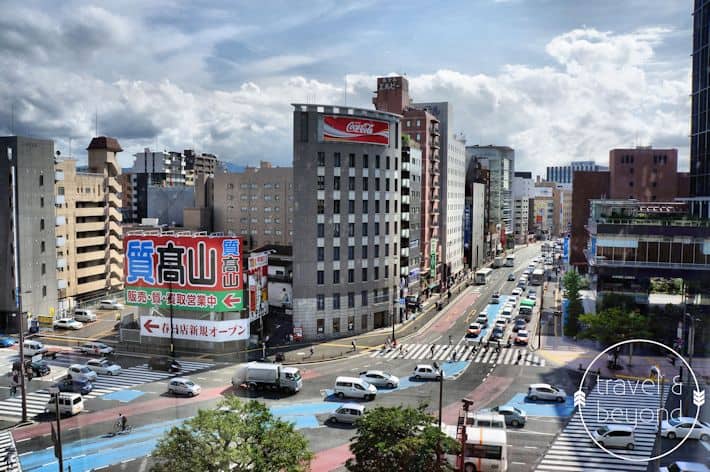 View of Fukuoka City from my hotel room

As I tucked into bed, I thought about my three days across northern Kyushu – the hot springs and villages of Oita, the volcanic crater and historic castle of Kumamoto and finally the modern city of Fukuoka. This marks the end of my three day visit to the land of the rising sun; a land with more than 2000 years of history.

Like most people I too associated Japan as a modern young nation which built swanky cars and futuristic cities. I too felt it was just a land of tycoons, tsunamis, volcanoes and earthquakes. But there is far more to this land, it has a tremendous history with rich culture and tradition. The more you glimpse into its past the more you understand what make this nation tick and how it transformed itself into an economic giant.

Its people are some of the most polite, hardworking and courteous you will ever encounter anywhere in the world. Its landscape takes your breath away. Its cities lead the world into futuristic architecture. Its food has a universal appeal and its innovations are at the forefront of modern technologies. To discover the soul of Japan one must visit it once and when you do, you come back a changed person.

I slid into my seat on Jetstar and looked at the receding shores of Japan. Goodbye dear land, I muttered silently, I promise to come back and visit you again. And as my proud aircraft sliced through the cloud cover, the Empire of the Sun disappeared from view. 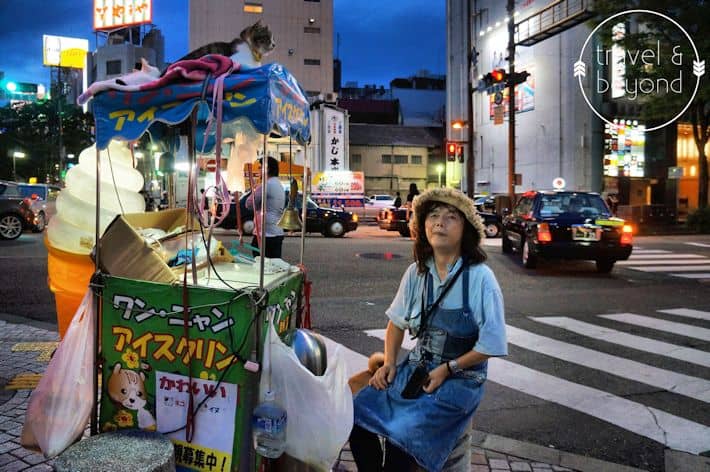 Jetstar Asia is the first low fares carrier to operate flights between Singapore to Fukuoka via Bangkok, offering travellers access to the island of Kyushu, well-known for onsen, beautiful mountain scenery and great food. Visit their official website for more information. Fukuoka is Jetstar Asia’s second destination in Japan. Jetstar Asia flies daily between Singapore and Osaka, via Taipei and Manila.

If you are travelling from Australia, you can fly Jetstar from Sydney via Gold Coast or Cairns to Narita and take a Jetstar Japan domestic flight to Fukuoka from there. Jetstar Japan operates a domestic network including flights from Osaka and Fukuoka.