Six Must See Festivals in Singapore

The city state of Singapore is renowned the world over as a vibrant Asian country located in the heart of South-East Asia. With shimmering skyscrapers in its financial district, extensive subway lines across the country, apartment blocks filling its skyline in every corner and vibrant nightlife, the city captivates the discerning travellers despite its expensive lifestyle.

Singapore’s multi-racial population and the government’s initiative to build and promote the island-nation into a place of vibrant colours and exciting things to see and do; keeps it on the bucket list of most travellers who seek to visit South-East Asia for the first time. With plenty of entertainment in store, delicious food and a diverse culture, visitors to Singapore have always left with fond and unique memories, vouching to return for another whirlwind around the island.

All year round, Singapore is filled with symbolic and fascinating festivals. Timing your travels to the island to witness at least one of the many festivals is a must for those wanting to experience culture first hand. Here are six must see festivals in Singapore that are very much part of local yearly tradition. 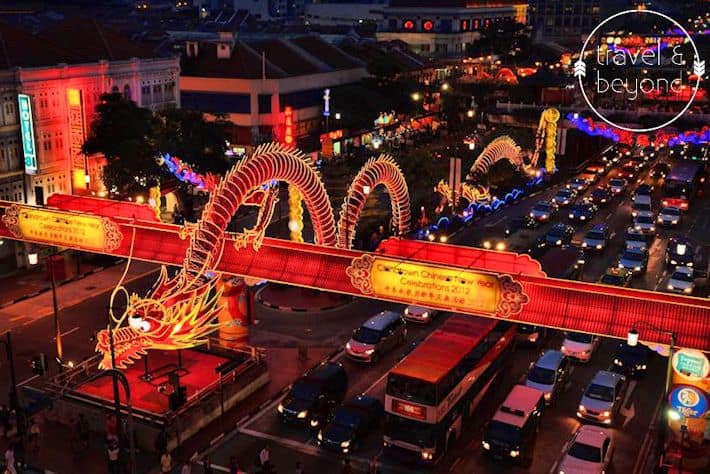 Marking the beginning of a New Year in accordance to the lunar calendar, Chinese New Year remains the most significant festival within the Chinese community in Singapore. It symbolises a fresh year filled with hopes and dreams, welcoming longevity and prosperity, leaving negative vibes from the past behind. Chinese New Year on the island is also celebrated with lights and fanciful décor.

Chinatown in particular, is transformed into a sea of lanterns, street stalls, dragons (or goats in line with 2015) and paraphernalia. A few blocks down on Pagoda Street and Sago Street, travellers will find it hard to resist the oriental charm of many of the stalls and stores that cater festival themed gifts found especially during the season. This celebration usually falls on different dates each year, so it’s best to check the calendars beforehand. 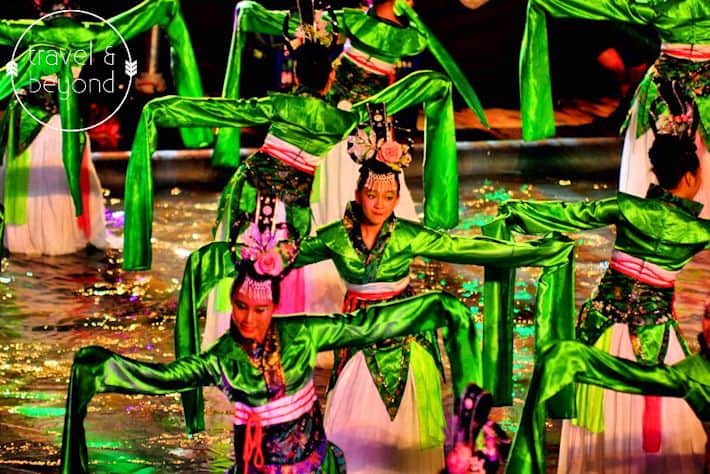 For a splash of gaiety in elaborate style, the Chingay Parade is a festival that involves large floats, thousands of dancers in fancy costumes and lively music in Singapore’s grandest street procession. The parade showcases the rich and vibrant multi-cultural flavours of the country and has also grown into an event for international cultures and contemporary dancers to showcase themselves.

The two-day parade grows larger and grander in scale each year, reaching out to 100,000 spectators along with millions of TV viewers from approximately 22 countries. Boasting loud unique costumes, elaborate masks and impressive props, Chingay is in every sense, true to its meaning, for Chingay in the Hokkien dialect means “the art of masquerade”. The festival is famous for its magnificent firework display at the end. 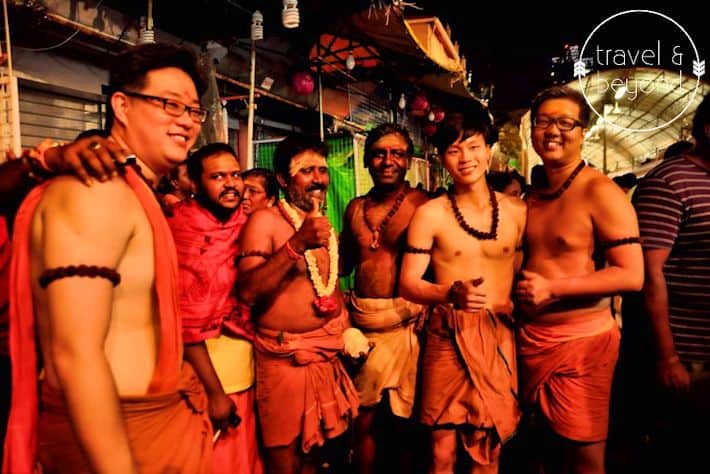 Witness a 170-year old tradition as over three thousand Hindu devotees take on a 5 kilometre procession that ends at the Sri Mariamman Temple to demonstrate their devotion to Goddess Mariamman as they walk barefoot over hot burning coals. The Fire Walking Festival called “Theemithi” takes place just several days before the Festival of Lights, another major celebration in the Hindu calendar of events. The ritual is taken on mostly by men who observe strict vegetarianism and fasting rituals weeks before. The smouldering white, orange and ash coloured embers are prepared in a fire pit about 2.7 metres in length at the temple. At the end of the fire pit is a pool of cow’s milk which devotees walk into to cool their feet from the scorching heat of glowing cinders.

As the hands of devotees are whipped and a yellow string with turmeric and a spray of Margosa or Neem leaves are tied to the wrist of all fire walkers, their journey to fulfil their ritual is an interesting moment to witness. The temple located in the heart of Chinatown plays host to this annual event, however getting in to have a clear view of the festivities can be extremely challenging. Note that visiting Hindu temples any time of year requires visitors to be dressed adequately with their knees and shoulders covered and footwear removed before entering. 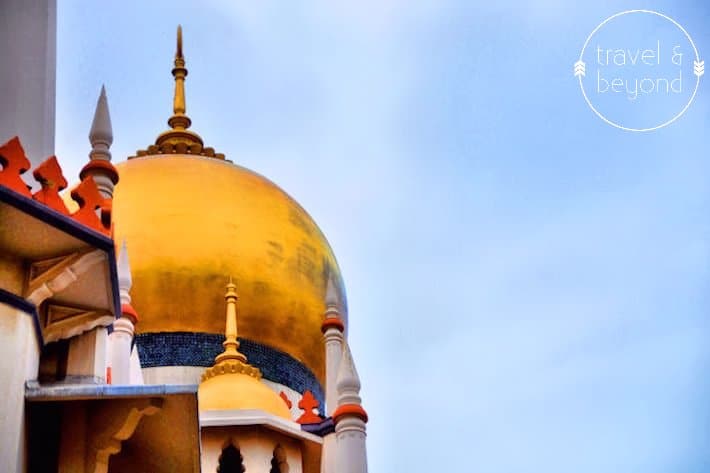 Visit the Sultan Mosque during the holy month of Ramadan for a great way to learn and understand the religion, culture and the diverse ethnic groups that make up the Muslim Singaporeans today. Lasting 29 to 30 days in the ninth month of the Islamic calendar, Muslim’s refrain from eating, drinking, smoking and sexual intercourse during daylight. Fasting ends at sunset each day.

The Sultan Mosque welcomes visitors to end the day’s fasting with them every Monday, Tuesday and Thursday in an event called Ramadan Trails that is usually combined with a tour of the mosque. Pre-registration for the event is required and entering the mosque as a non-Muslim is only allowed if you are accompanied by a docent. Visitors may have to use cloaks provided by the mosque and footwear is to be removed before entering. 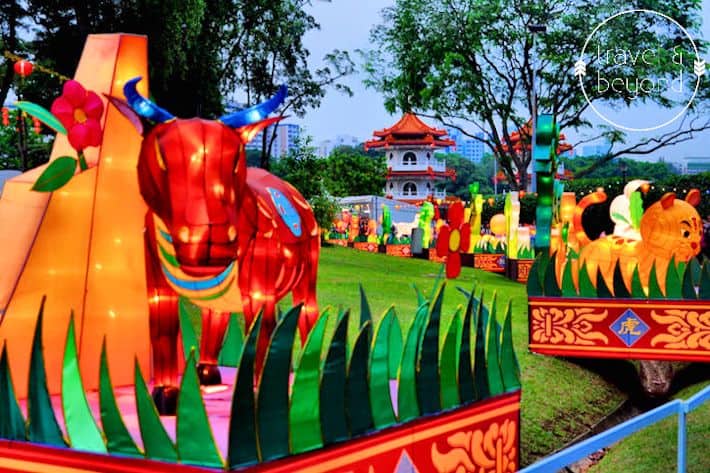 Spend an evening out at the Chinese Garden in Singapore as they bring alive a 3000-year old tradition called the Mid-Autumn Festival. Annually celebrated on the fifteenth day of the eighth lunar month in the Chinese calendar, the celebrations are filled with ancient legends, Chinese customs, large colourful lanterns and delicious round cakes made from lotus seed, red bean or walnuts and pumpkin seeds. The Chinese Gardens located in Jurong East is modeled after the northern Chinese imperial style of landscaping and architecture with majestic pagodas, statues and bonsai gardens.

The festivities would also be accompanied with the burning of incense and the merriment of music and dance. Each lantern display has a short anecdote next to it to help visitors understand the uniqueness and meaning of each colourful ensemble. There is also a wishing tree where visitors can throw golden coins tied on red ribbons onto its branches in hope that the Goddess of the tree will grant them their deepest desires.

Christmas in the Tropics 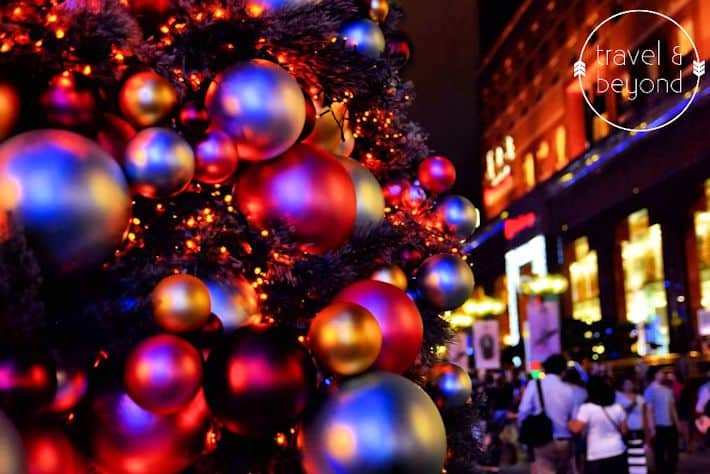 In Singapore, the year end festivities are taken to an extremely exciting extent that walking down the city’s most loved streets would make any frown turn upside down. Orchard Road, Singapore’s ultimate shopping district along with Marina Bay, the luxurious waterfront spot of entertainment and dining, turns into a myriad of tiny lights as Christmas ornaments glisten the bustling city skyline. Major malls along the busy thoroughfare get decked out in their Christmas best – a sight truly not to be missed.

The sheer magnitude of Christmas themed lighting makes celebrating the joyous occasion in the tropics all that more fun. Walking the streets can be breath-taking as you stop to admire each constellation of lights, decorated trees and radiant reindeer. Alternatively, for a better view of the city’s entire Christmas Light-Up, opt to take on a hop-on hop-off bus ride to feast your eyes on more glimmering moments along the thoroughfares of Raffles City, Millennia Walk, the Singapore Flyer and The Fullerton Hotel.