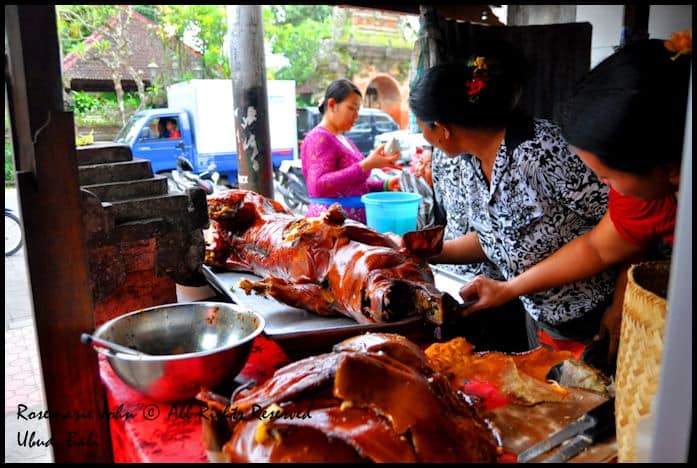 The most talked about dish on the Island of the Gods revolves around that of a suckling pig. Referred to as ‘Babi Guling‘ by locals, a whole pig is marinated in ground chilli, turmeric and oil and stuffed with more chilli, onions, ginger, galangal, candle nuts, coriander, lemon grass, pepper, dried shrimp paste, coconut, bay leaves and traditional spices.  Skewered and grilled over an ember made from dried coconut shells for about five hours until its crispy and tender, the aroma of this dish lingers down the street.

The best Babi Guling can be found at Ibu Oka’s run by a family who has been serving this dish for a good sixty years over a span of two generations. It is an amazing sight to see the restaurant filled with people from all corners of the world, who come to savour the delicacy of Ubud. For Rp50,000 (approximately USD$5) you get a meal consisting of  roasted pork, blood and liver sausages, vegetables soup, crackling skin and rice. Ibu Oka is located at Jalan Tegal Sari No. 2 opposite the former Royal Palace.