By Rosemarie John – A spell-binding performance, the ‘Kecak‘ or in some instances, the Ramayana Monkey Chant combined with a Fire Dance keeps you engaged and asking for more, making a visit to Uluwatu a must when you visit Bali.

Staged in an ancient Roman like open-air amphitheatre atop a cliff, the Kecak performance tells a tale and depicts a battle scene from the Ramayana, an ancient Sanskrit epic. As the sun sets behind the mostly male performers, you get drawn into the story.

As dance and drama are an inseparable part of Balinese temple devotion, this story enfolds in the Dandaka Forest where Prince Rama with the help of Lord Hanuman, King of the Vānaras set out to save Rama’s beloved Sita who has been abducted by the evil King Ravana. 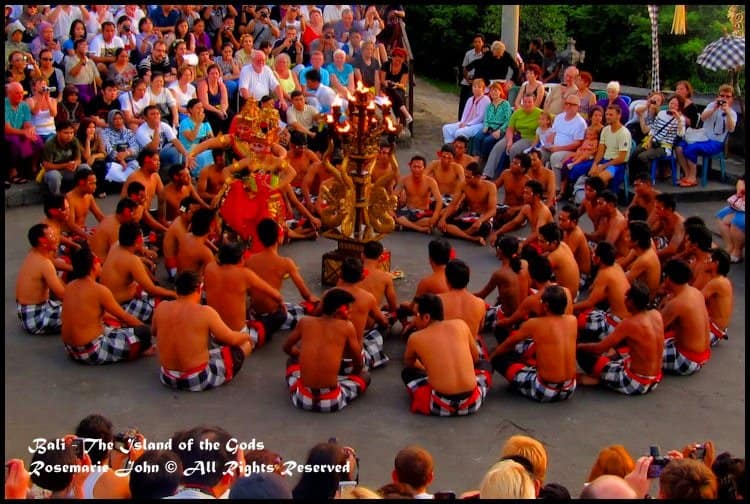 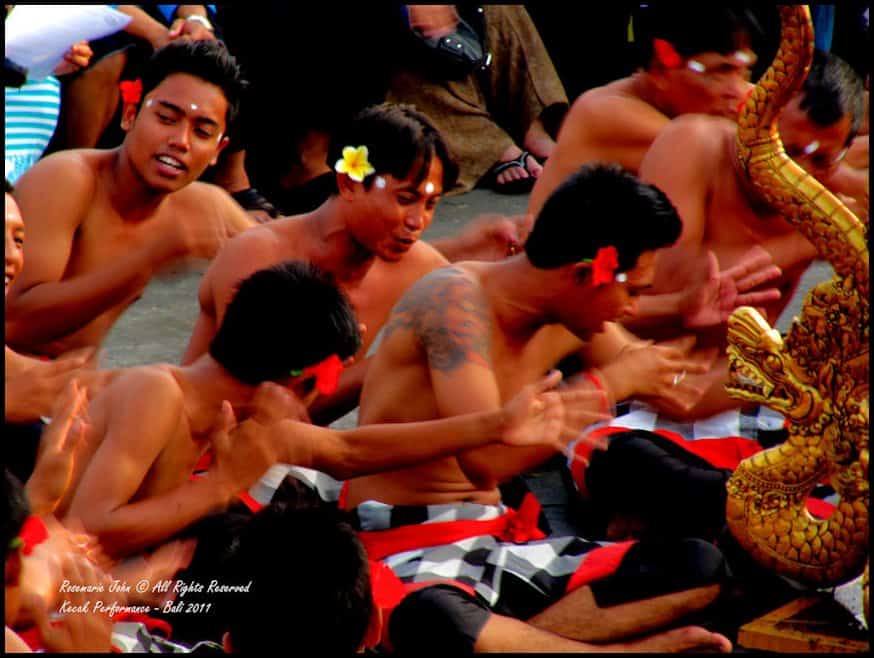 Relying on no musical instruments, the melody and rhythmic beats are created by approximately 150 men, forming a chorus that sings and percussively chants the word ‘chak’. Draped in black and white chequered cloth, the men perform with rich expressions and vigorous arm movements either sitting down or standing in a circle forming the dance arena. As the sun sets and darkness creeps in, the arena is dramatically lit by flickering bamboo torches.

The musicality of the Monkey Chant may remind you of the fantasy portion of a film entitled ‘The Fall’ directed by Tarsem Singh in 2006, in which the actors incorporate similar words and style to describe a map being drawn. As you connect the two, even the breath-taking views of the waves crashing onto the cliffs are soon forgotten as the trilling Fire Dance gets you transfixed and hypnotized. 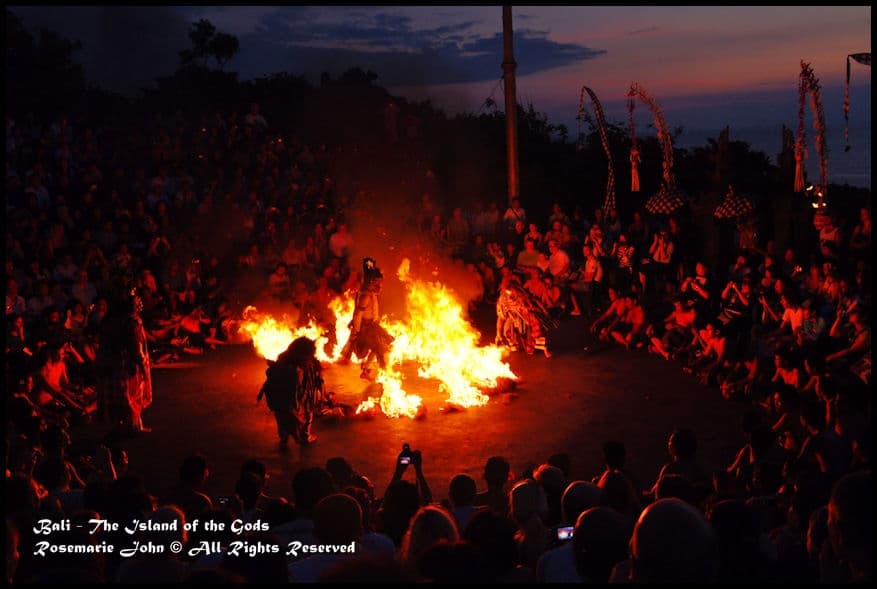 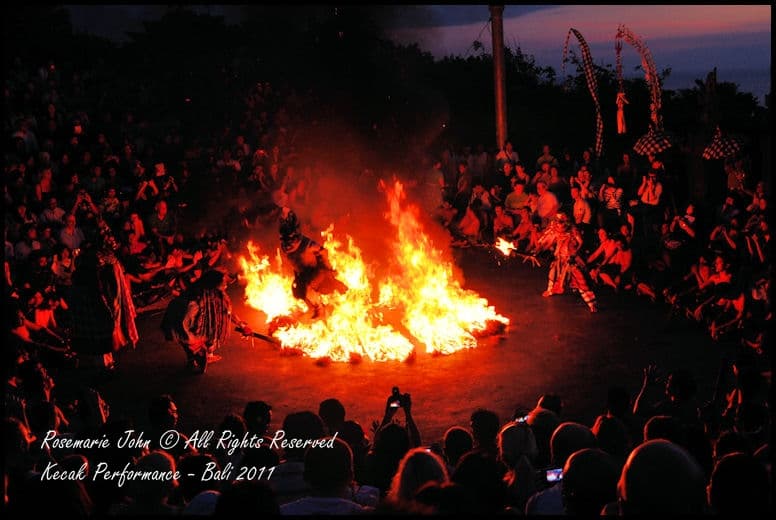 The cheeky White Monkey’s daring acts and stunts, both menacing yet courages keeps you entertained and begging for more. Spanning about 60 minutes with a ticket cost of Rp70,000 (USD8.50) each, catch this amazing routine everyday at 6pm at the amphitheatre that sits across from Pura Luhur Uluwatu, a mesmerizing temple regarded as one of the nine important directional temples in Bali. Make sure you get to the amphitheatre around 5.15pm if you want secure a good seat in the middle of the theatre. 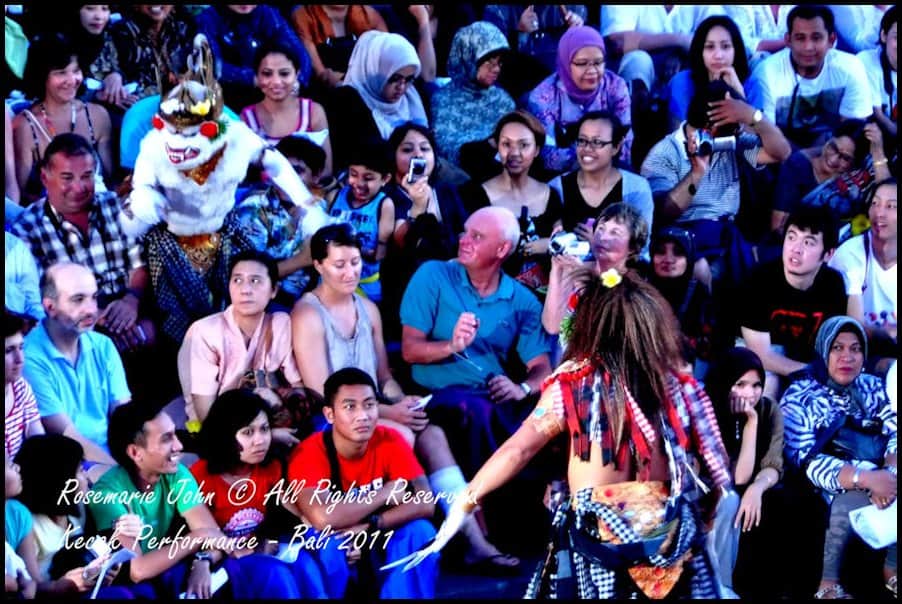 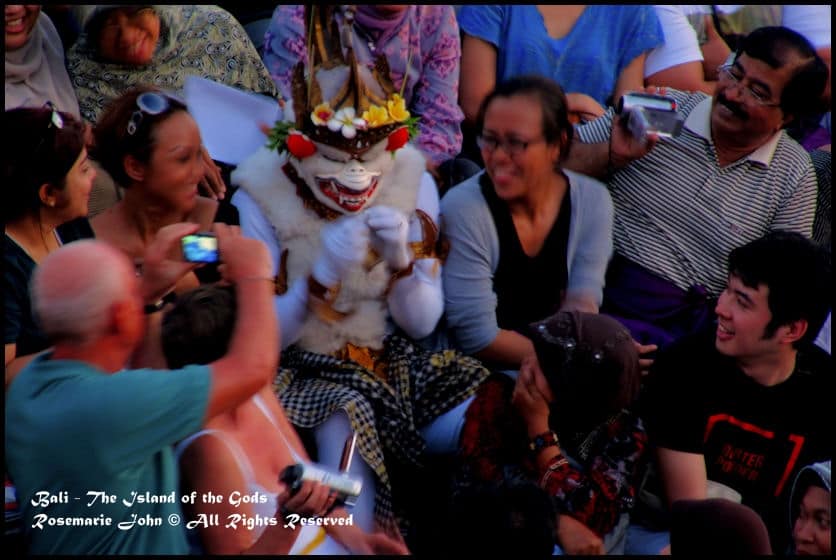