Inside the Museum at Eldridge Street, New York 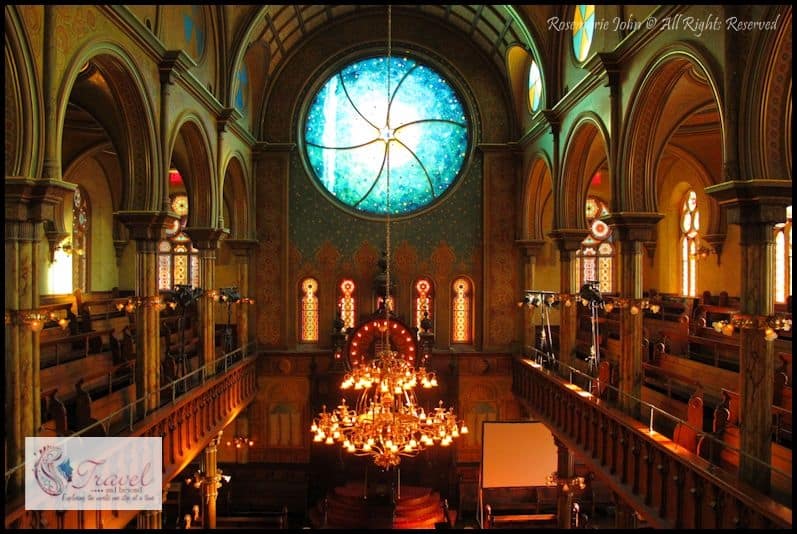 The Museum at Eldridge Street is located within the Eldridge Street Synagogue which opened its doors on New York’s Lower East Side in 1887. Nearly lost to time, harsh weather and limited use, this National Historic Landmark has been faithfully and painstakingly restored to its evocative original condition.

Today, it is the only remaining public marker of the great Jewish migration to the Lower East Side. A powerful symbol of Jewish continuity and immigrant aspirations, the building bears poignant traces of past generations – preserved for generations to come. The museum at Eldridge Street shares space with Congregation K’Hal Adath Jeshurun which continues to hold Sabbath and holiday services in the synagogue, as it has since opening day.

The synagogue was considered the most spectacular structure on the Lower East Side when it was constructed. Its grand façade and Star-of-David patterns transformed the street-scape and announced the East European Jewish presence.

A century later, the grand sanctuary was in a state of near collapse. The Eldridge Street Project and its 18,000 contributors pieced together the necessary private, city, state and federal government support to save the building.

With authenticity as they goal, the restoration team used materials and techniques of the synagogue’s 19th century builders and kept intact elements that evidence the building’s distinguished history. With restoration costs of $18.5 million and after 20 years of work, the synagogue is secure, stable and glorious again.

The sanctuary is 3,060 square feet and follows a basic basilican plan. A balcony extends over the paired aisles and west end and is supported by two rows of structural columns on the main level that divide the space into three longitudinal sections.

In accordance with the Orthodox Jewish precept of separate seating, the women and girls would take the side tower stairs to their place in the balcony; the men and boys entered the center doors and sat below.

The balcony arcade is defined by a second tier of columns that support Moorish arches – as with the façade. Moorish arches and details are everywhere, from the walls to the windows to the ark to the pews. 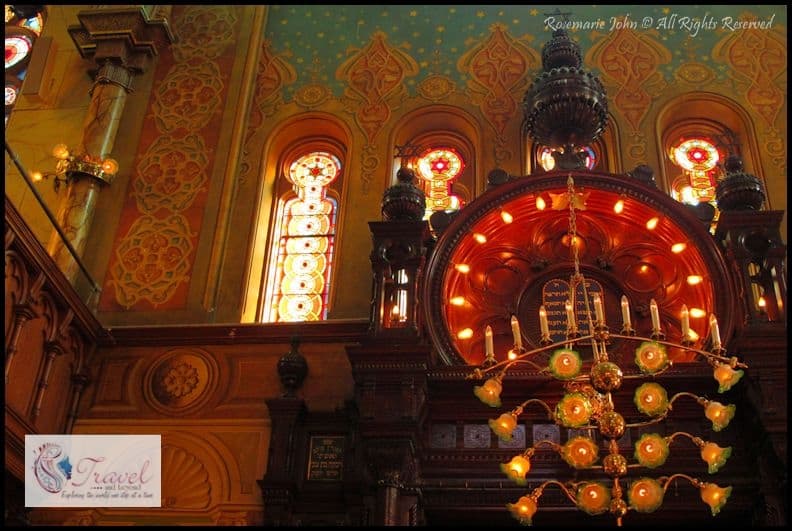 During prayer, Jews are required to face eastward toward Jerusalem in the direction of King Solomon’s Temple. And so, the sanctuary’s focal point, the Torah ark, is at the eastern wall. The Ten Commandment tablets sit above the ark. Before the ark, a huge menorah holding nine electrified candles and 16 shaded lights, rises from the amud or lectern. 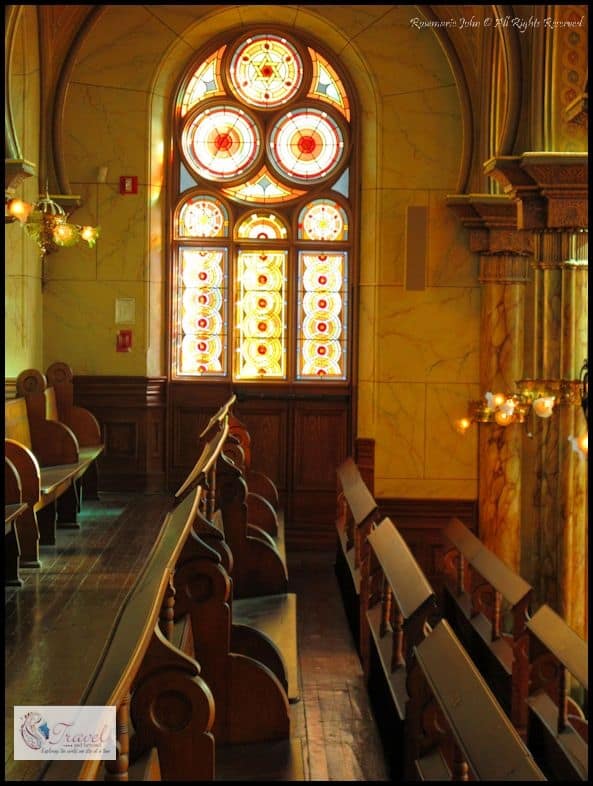 The restored women’s balcony which are lined with five stained-glass windows, identical in pattern, but different in effect due to varied colour schemes used by the original craftsmen. 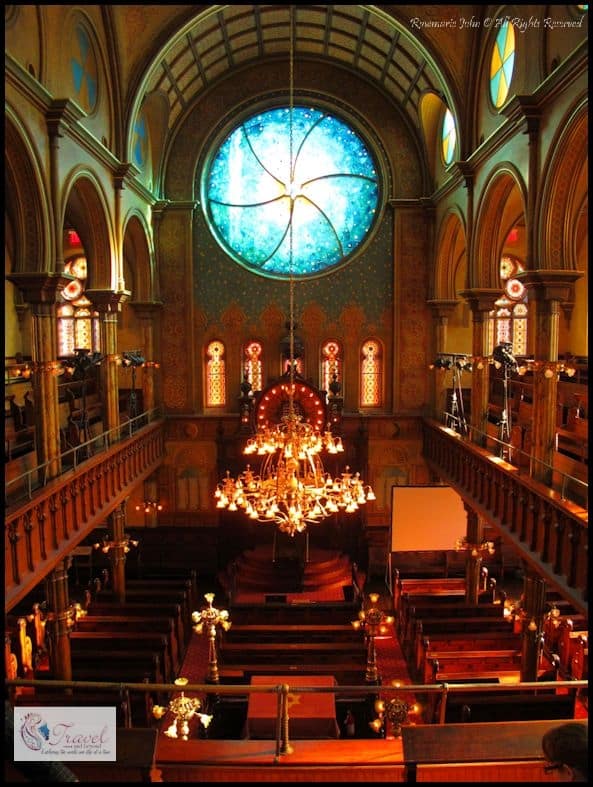 The bimah, the platform from which the Torah is read, is in the center of the sanctuary. Its placement there references the sacrificial altar in King’s Solomon’s Temple and handily meets the Talmudic requirement that the chanting of the Torah be heard clearly by all. 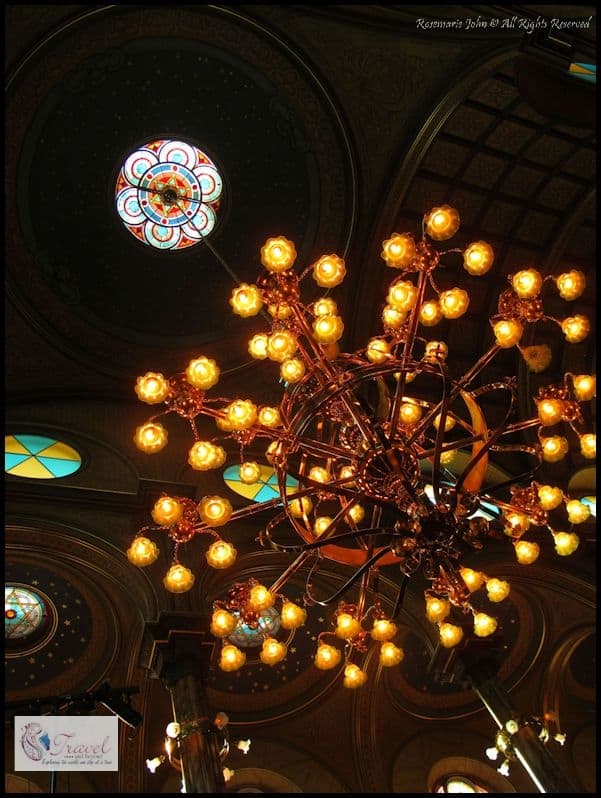 The sanctuary glows with the warm light of several beautiful brass light fixtures, most notably, the grand Victorian chandelier which is suspended from the central dome. Originally lit by gas, its numerous arms and green rimmed glass flowers were eventually turned downward to accommodate light bulbs. The chandelier holds 75 individual lights. 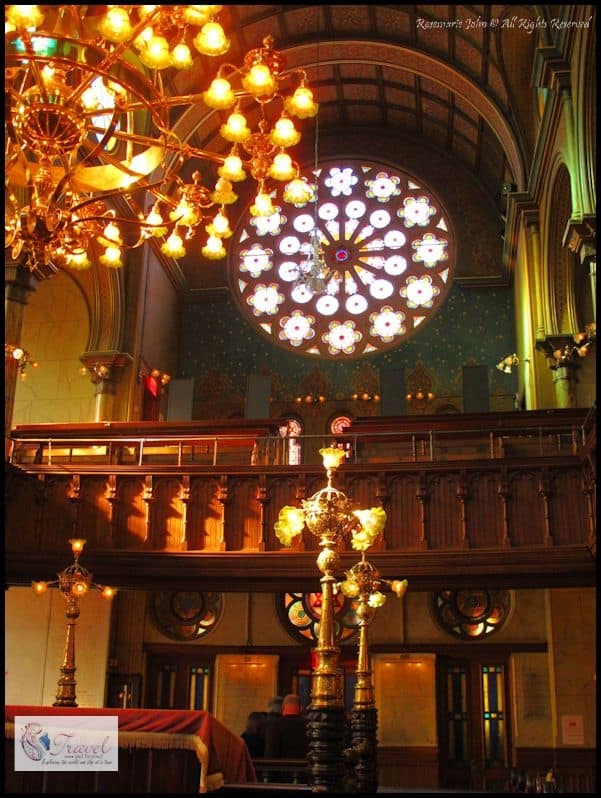 The rose window on the synagogue’s western wall, as seen from inside the sanctuary. 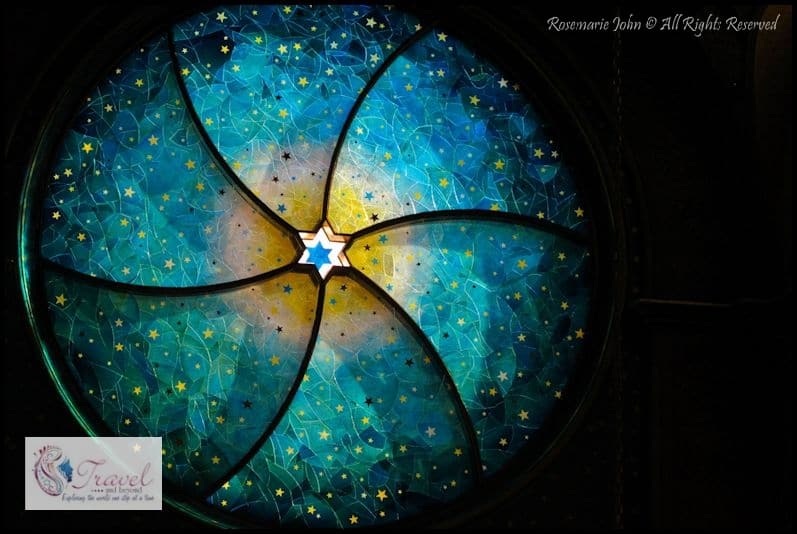 The new east window, designed by Kiki Smith and Deborah Gans was installed in the fall of 2010. Weighing more than 6,000 pounds and composed of more than 1,200 pieces of glass, and not a single piece of lead, the new window weds traditional stained glass with modern technologies. Combining both Jewish and American motifs, it pays tribute to the aspirations of the synagogue’s 19th-century immigrant founders.

Located at 12 Eldridge Street between Canal and Division Streets in the heart of Lower East Side and Chinatown, the Museum is open Sunday to Thursday from 10am to 5pm, and Friday from 10am to 3pm. Admission fees are as follows:  $10 for  adults, $8 for students/seniors and $6 for children aged 5-18. For directions on how to get there, click HERE