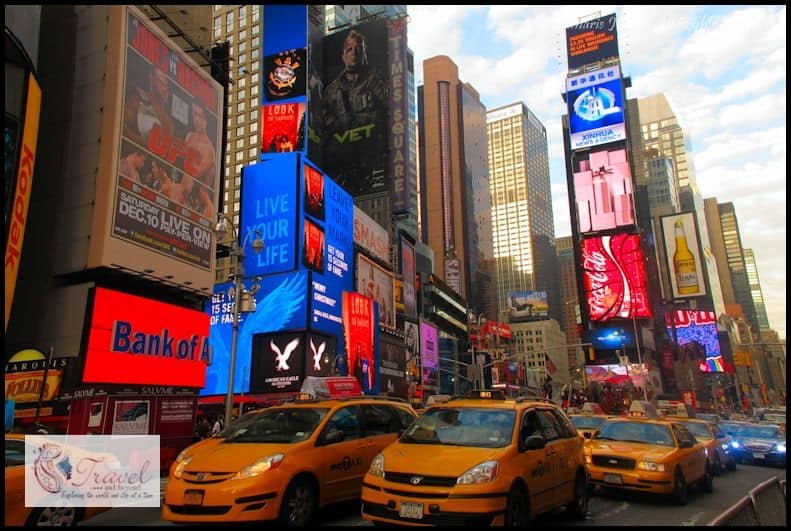 Shops on either side of the road, blazing neon signs, a million yellow cabs rushing by, ticket hustlers at every turn, hordes of busy humanity rushing to and fro, swanky designer stores, a babel of world languages and police men on galloping horses’ sums up our first unique impressions of Times Square.

Termed “The Crossroads of the World”, Times Square is a major commercial intersection in Midtown Manhattan situated at the junction of Broadway and Seventh Avenue and stretching from West 42nd to West 47th Streets. It is also home to many notable landmarks of New York City like the Coca-Cola sign, Hard Rock Cafe, M&Ms World and One Times Square, site of the New Year’s Eve Ball Drop. The streets are a flurry of activity any time of day.

Times Square kept us entertained with so much to look at, lots to buy and a hundreds of photographs to take. While trying to absorb the whole experience we ended up walking across more blocks than we had originally planned. The place does that to you, it takes you on a journey of curiosity making you wonder if the illumination of advertisements and signage would ever end.

It’s difficult to even find a spot that isn’t  covered in brilliant lighting – it felt like Times Square was in constant festival mode. In Asia, our streets light up with such extravagance only during the major celebrations and we enjoy them only for a few weeks. To have such vibrancy in one place all year round makes Times Square truly incomparable.

Wading through the crowds was challenging enough let alone finding a nice quiet cosy restaurant to dine it. Shops on the main street were either too crowded or too expensive. We had given up hope in locating a restaurant and chose to munch on pizza slices and hot dogs that we bought from the many food stalls along the wayside. 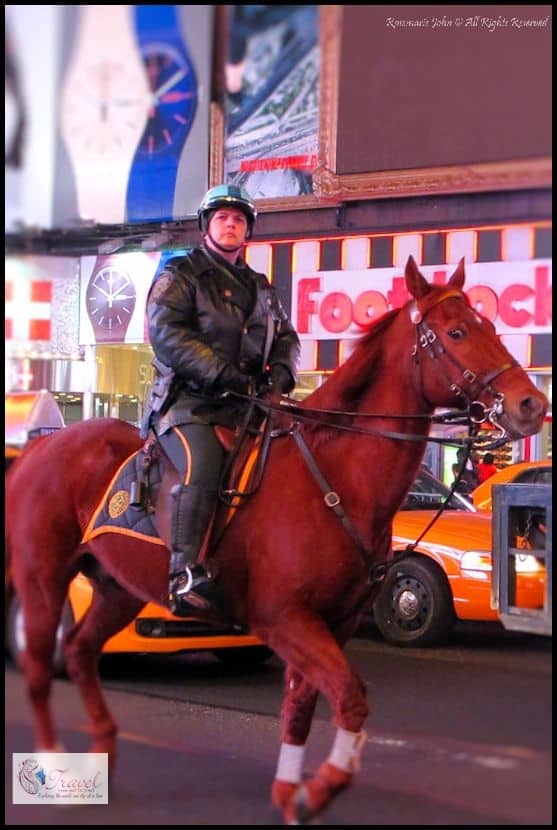 Police on Horseback on the streets of Times Square 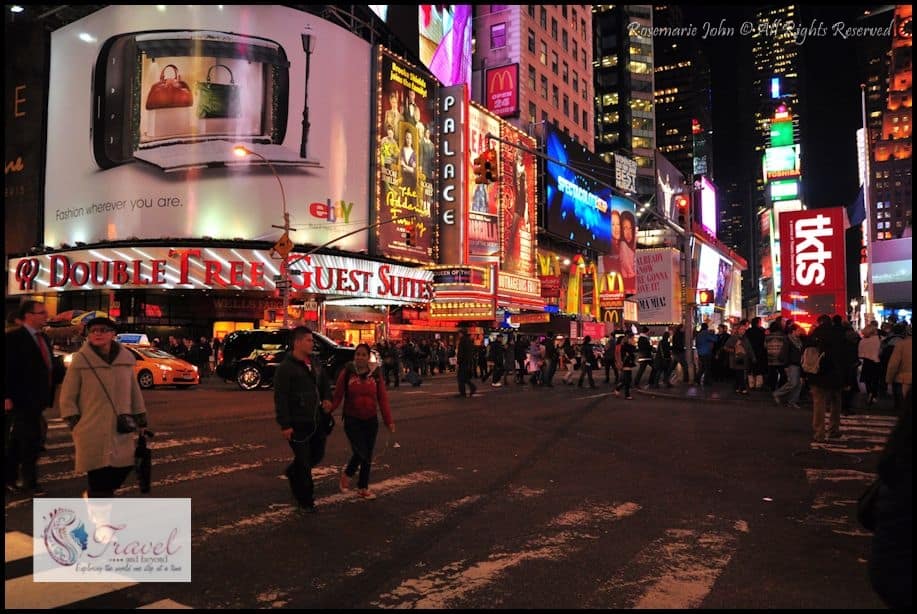 As we explored the hub at the Broadway theatre district and had our fair share of shopping, we stumbled upon Junior’s. Located in a rather quiet road opposite the Manhattan Hotel, Junior’s with its reputation for the best cheesecake in town is a restaurant that features both outdoor and indoor dining and a full service bar.

Founded by Harry Rosen in 1950, Junior’s started out in Brooklyn, New York. Today it has three more outlets located at Times Square, Grand Central and MGM Grand at Foxwoods. Though we were unaware of its history or prominence at that time, we chose to dine at Junior’s mainly for its welcoming feel and spacious layout that didn’t give off that overcrowding ambience even though it was practically full when we entered.

Unlike other restaurant along the main street that had waiting times  due to space constraints, we were seated immediately at Junior’s. The waiters were friendly and the menu looked amazing. While we weren’t as hungry as we started off with all the small bites along the way, we decided to order something from the appetizer section.

We ordered Brooklyn Style Buffalo Wings, Calamari with Marinara Sauce, Onions Rings and for something sweet, Chocolate Milkshake and Red Velvet Layer Cake. Each dish was priced below $10 and we found that pretty reasonable based on their large generous portions and based on what we had been paying at similar concept restaurants over the past few days.

Although known for their famous cheesecakes, their Red Velvet layer cake was divine. It was rich, moist and ever so buttery with the silkiest cream cheese frosting we’ve ever had. This was classic American dessert at its best.

As our experience with their menu is rather limited, thus commenting generally on their dishes wouldn’t be fair. However, the quality of food and value for money for the dishes we did have were good enough to recommend to any traveller who wants to sample authentic American flavours on the bustling avenues of Times Square. A truly memorable experience indeed… 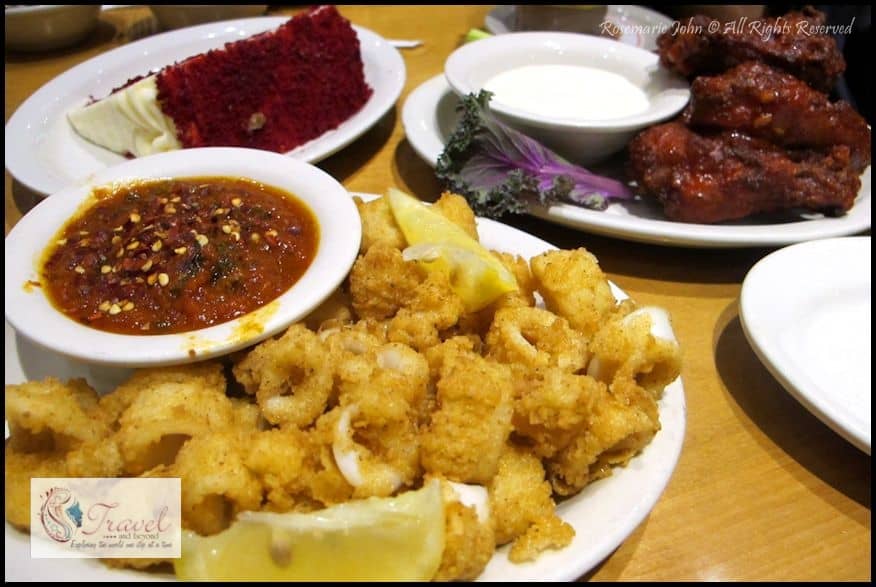 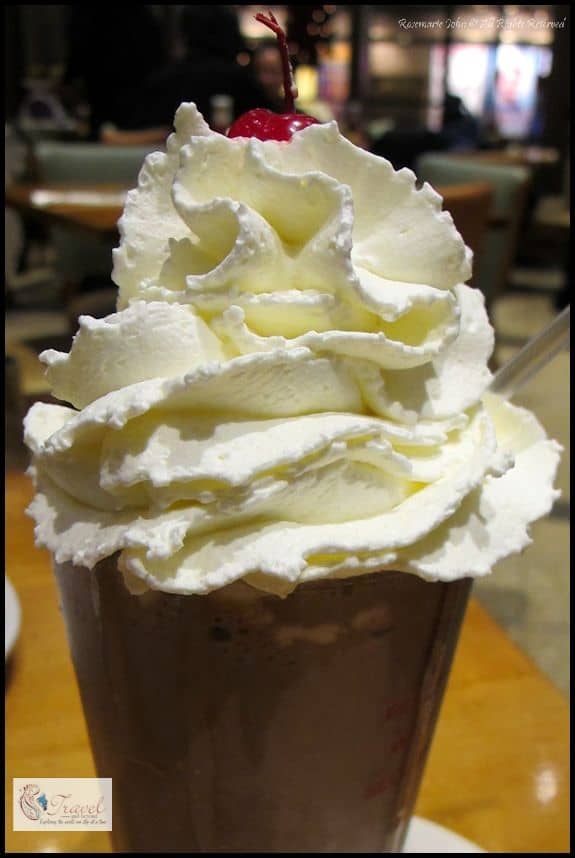 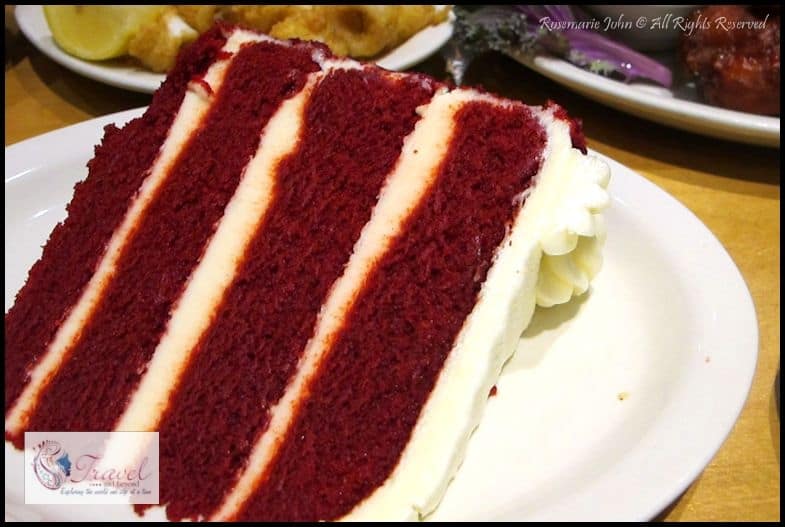