Day 2 – For an Ice Breaking Adventure

As the fog lifted that morning, the beauty of the narrow valley between the hills stared back at me as I sipped on some green tea. We did not get up early as planned so after a quick breakfast, we hit the road again and were heading to Abashiri, in the Okhotsk subprefecture famous for its prison that incarcerated political prisoners during the Meiji era.

What Abashiri is also famous for is its drift ice. We were off on an adventure to the shores of Okhotsk, the southernmost point where the ocean freezes but not before stopping for some soft cream and then lunch. 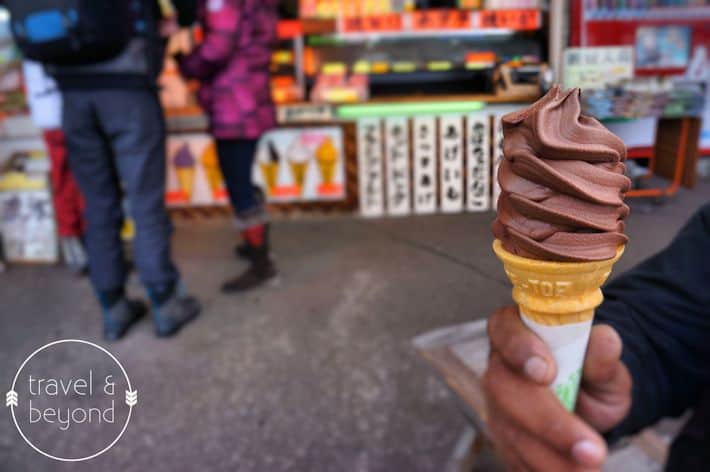 Lunch was special. It was a bowl of rice topped with fresh sashimi including three types of roe – salmon (ikura), flying fish (tobiko) and hearing (kazunoko). It was accompanied by a piping hot vegetable and tofu soup topped with clams. Thinly sliced raw fish may not be everybody’s cup of tea but it was something I was looking forward to dearly. You cannot travel all the way to a Japanese fishing town and not have sashimi! 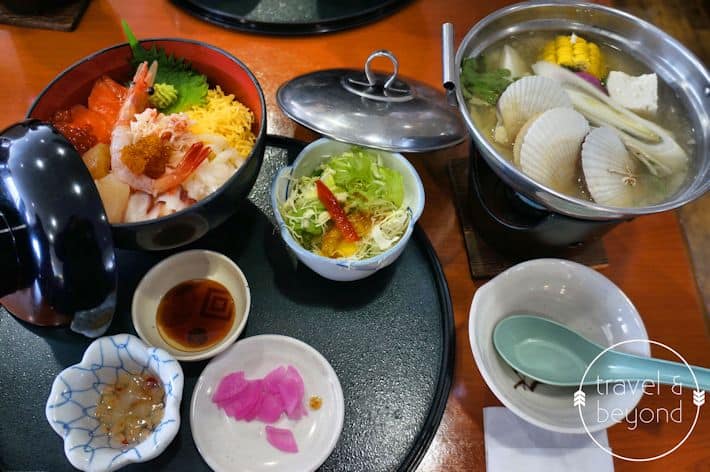 A 10 minute ride from lunch brought us to the port where we boarded the Aurora icebreaker ship. Did you know that salt water doesn’t freeze? Yet the sea had chunks of ice floating. Large portions of the sea frozen on the surface, which was an interesting phenomenon to see. We learnt that ice called Ryuhyo originating from the Amur River in Russia drifts through the Sea of Okhotsk reaching Abashiri in January and disappearing in March. The one hour ride towards the open sea has the ship breaking the hard ice into smaller chunks which turned out to look like huge serves of pavlova to me! It was beautiful!

An experience on an icebreaker ship is a tourist magnet. Like me there were tens of curious tourists aboard the ship. Everyone was busy taking pictures. The cold air throbbed with feverish excitement. A motley bunch of seagulls decided to follow the ship. They didn’t seem to be afraid of people. They flew behind the ship like singing escorts as the ship took to the sea. A little further away we could see ice all around us. I looked behind me, past the seagulls to see the coast line of the city receding in the background. 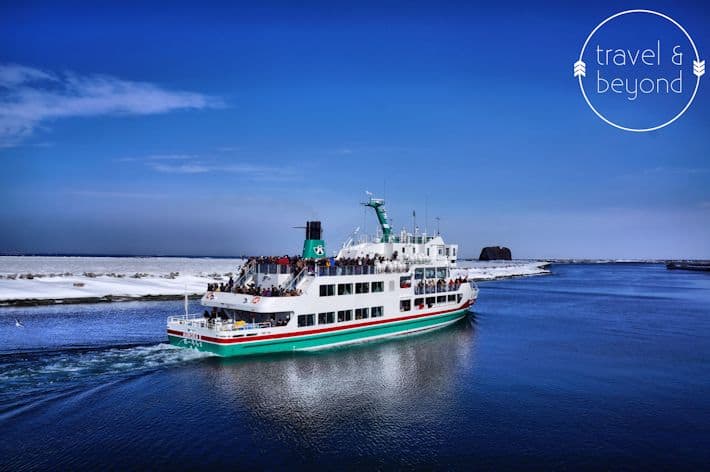 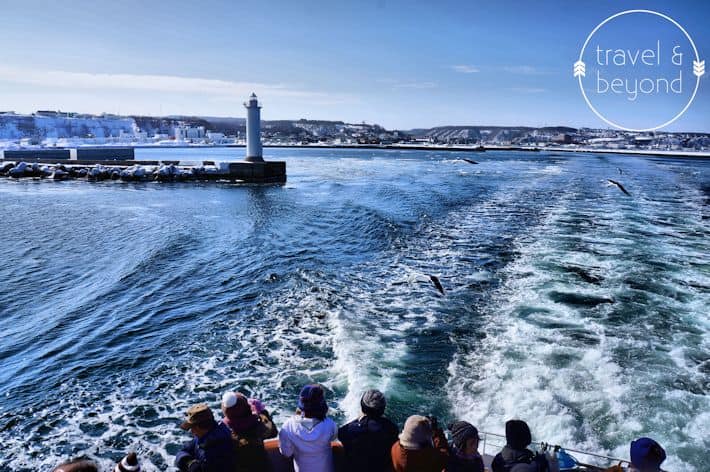 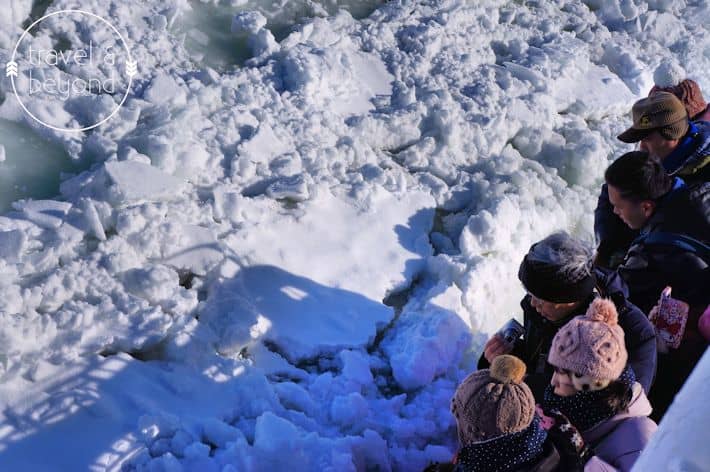 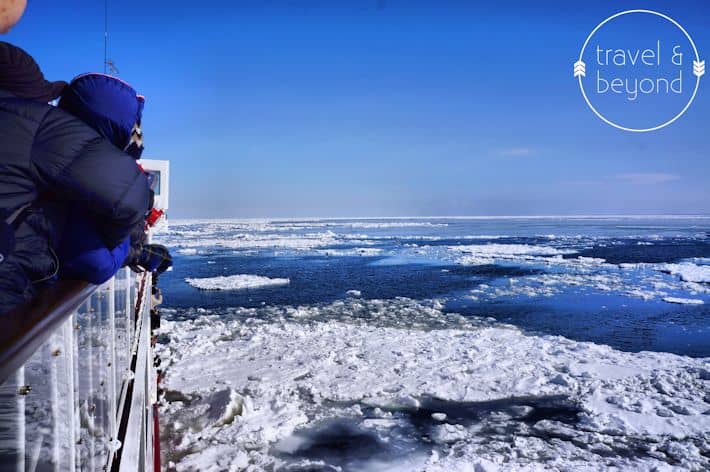 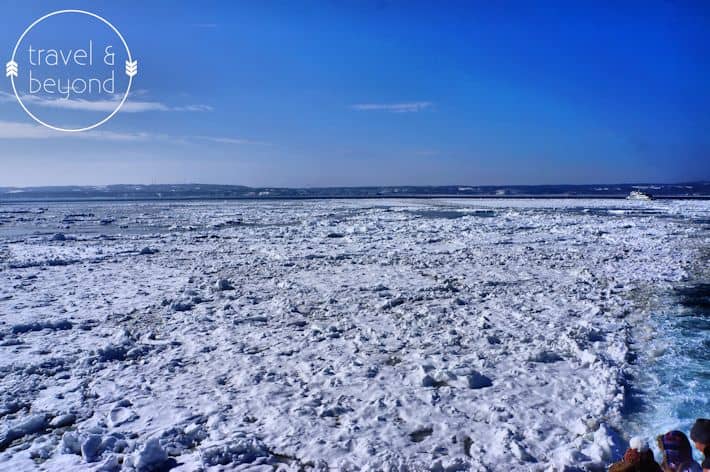 When we encountered drift ice, the ship groaned as the ice broke beneath and moved away. We spent about 20 minutes watching the workings of the Aurora Icebreaker do its bidding. The ship rocked at times and we held on to the railing. Soon it was turning to head back to shore. Chunks of ice were floating away and we broke free into clear waters.

With the wind in my face and portly seagulls flying low above us, the journey back to port couldn’t be any more relaxing. The massive crowds on the upper deck of the icebreaker ship moved to the lower deck. They were done with their selfies and went off in search of warmer surroundings. But this meant we finally had the time and space to take some nice photos. 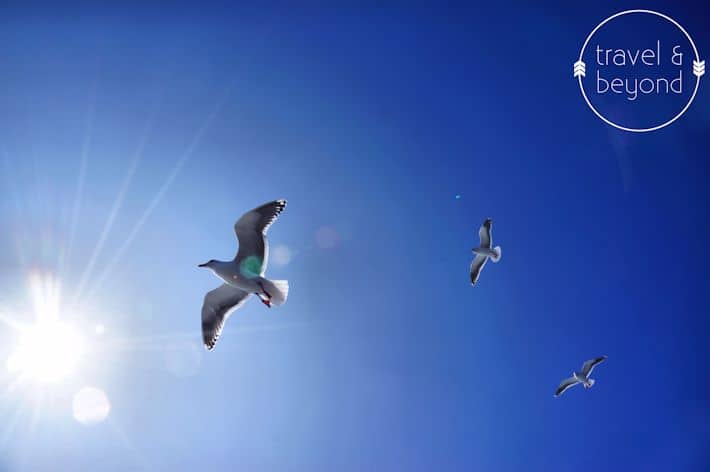 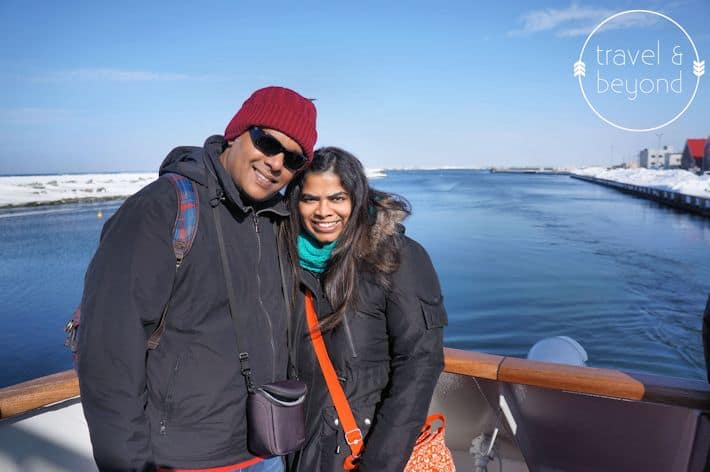 Next up on our sightseeing journey was Lake Mashu, the second clearest lake in the world after Lake Baikal. While visitors aren’t allowed to descent into the crater lake formed in the caldera of an active volcano, the observations decks provide breath-taking views. Unfortunately for us, when we got there, the entire area was blanketed by heavy fog due to an on-going snowstorm. Even the stairs heading up to the deck weren’t visible. What I did capture was the exact sneaky moment before Joseph decided to throw a snowball at me! 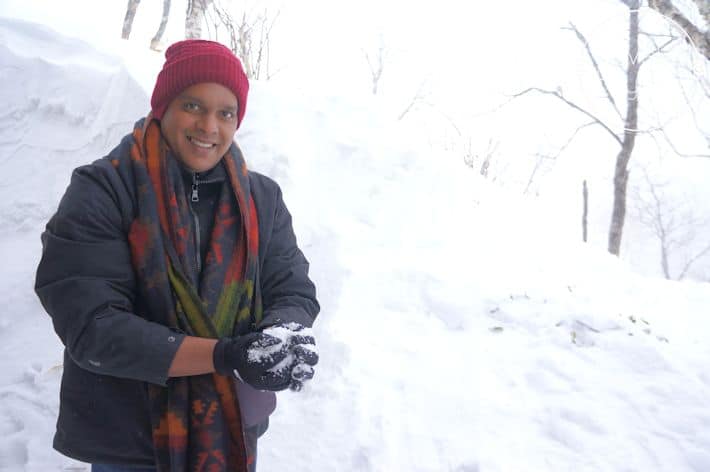 After a brief snowball battle, it was time to head to our hotel for the night. New Akan Hotel sits at the edge of frozen Lake Akan, famous for its rare moss called Marimo. These curious round balls of moss is said to grow to a size of a soccer ball. They are not visible in winter but what we did see was a lovely firework display at the mini ice festival on the lake and interesting artwork of the indigenous Ainu people at the village located a mere 10 minute walk from the hotel. 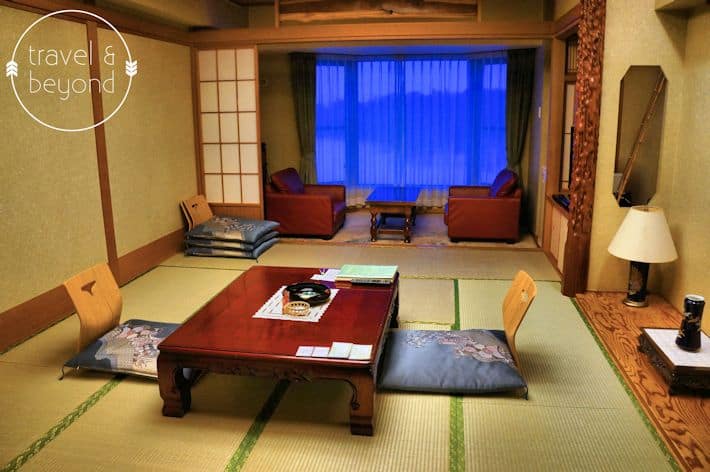 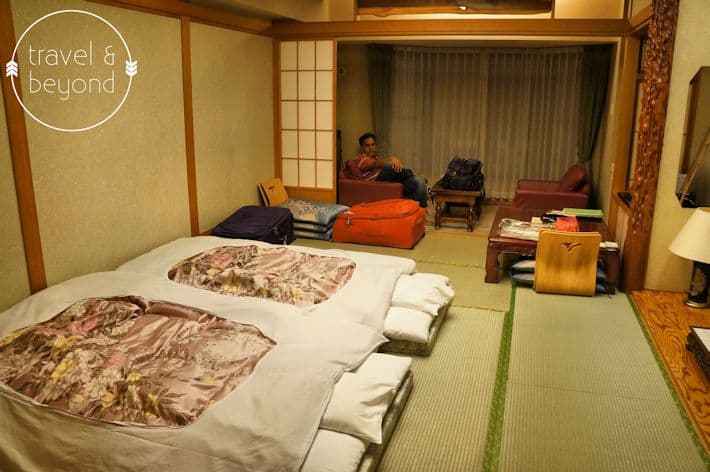 Our room for the night was also a washitsu style with complimentary access to the onsen. The dinner spread was huge but very crowded so after a quick bite; it was off to bed for me and a dip in the onsen for Joseph.