Views from the Esplanade in Singapore 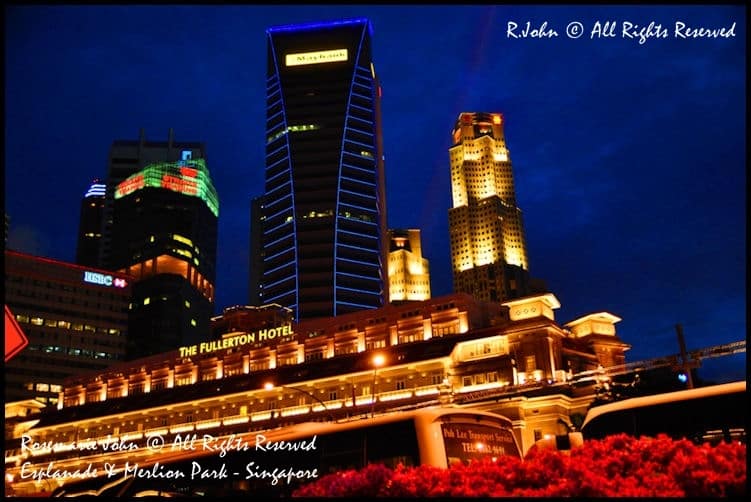 An evening out at the waterfront during Independence Day Rehearsals.

The Esplanade is a waterfront location just north of the mouth of the Singapore River in the city. It is also home to the famous Singapore Merlion. Regarded as Singapore’s icon, the Merlion is a mythical creature with the head of a lion and the body of a fish.

Designed in 1964 by Fraser Brunner, curator of the Van Kleef Aquarium for the Singapore Tourist Promotion Board, the fish body represents Singapore’s origin as a fishing village when it was called Temasek prior to the arrival of the British colonisers, while the lion head is in reference to a tale narrated in the Malay history, that describes how a Malay king named Sang Nila Utama reportedly encountered a lion when he first stepped on the shores of the island, leading him to rename Temasek to Singapura meaning ‘lion city’ in Sanskrit. 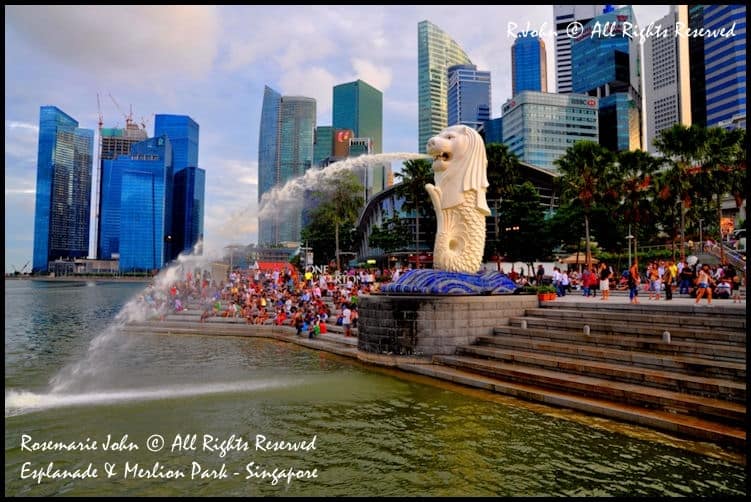 Facing east, the Merlion’s direction is believed to bring prosperity to the country based on Feng Shui guidelines (Chinese geomancy). This auspicious orientation was preserved even after its relocation in 2002 to the new pier specially built on the other side of the Esplanade Bridge, overlooking the Marina Bay.

Singapore gained sovereignty as the Republic of Singapore on August 9th 1965 after being invaded by both the British and Japanese and also after its independence from the Fedration of Malaysia. Singapore celebrated its first  National Day in 1966, one year later. Usually held at decentralised sites since then, the 2011 celebrations will be held at The Float at the Marina Bay. The most awaited part to the celebrations is usually the Flypast that has been carried out since 1971. The Republic of Singapore Air Force features various military aircraft on parade (mobile column) and also showcases the country’s military air offensive and defensive capabilities via a demonstration (flypast).

Rehearsals for the Independence Day goes on for at least four Saturday’s before the actual celebrations. Travellers and locals alike flock to the Esplanade to witness the events that take place during the rehearsals including a few stints from the Flypast. For the first time in these celebrations, the state flag will be flown past on a Boeing CH-47 Chinook while the national flag is raised during the singing of the national anthem! The CH-47 Chinook is a a twin-engine tandem rotor heavy-lift helicopter that flies at a top speed of 315 km/h. 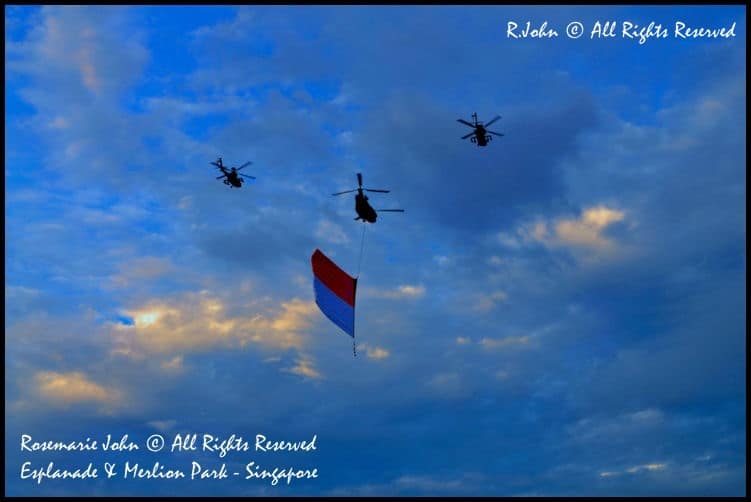 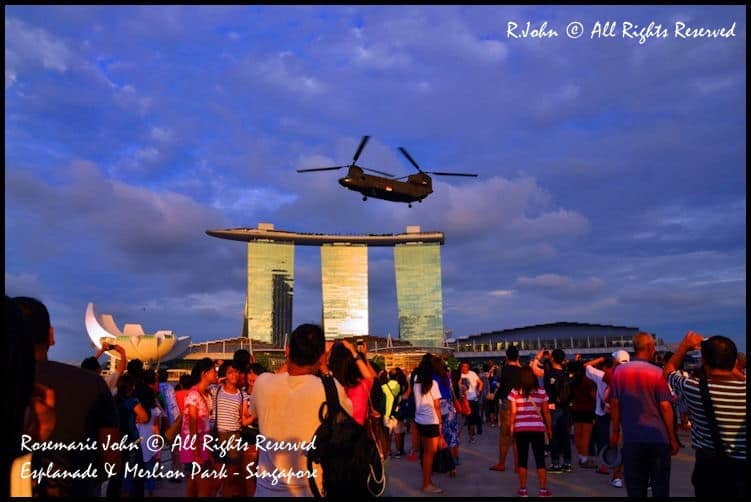 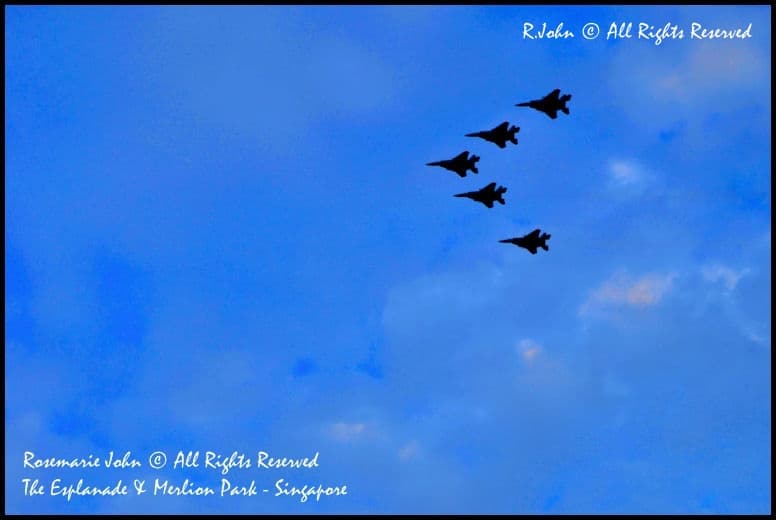 Held from dusk to night, the climax of the celebrations is the fireworks display. Some even head to the Marina Bay Skypark to view the fireworks as a better vantage point. 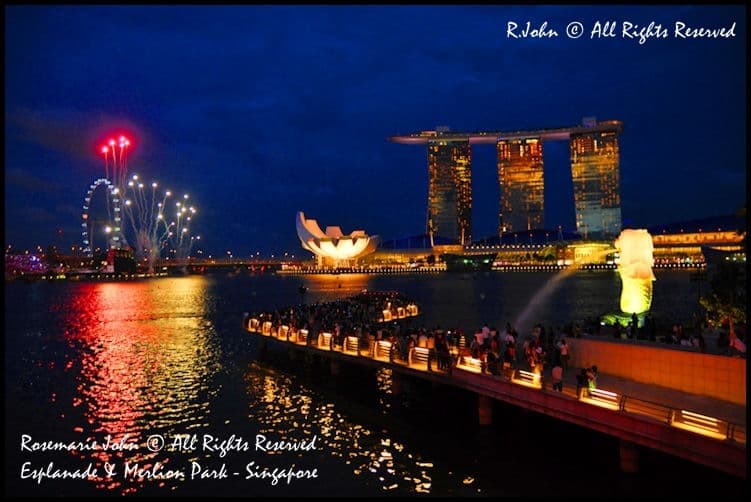 For the second time in history, the presidential 21-gun salute will be held on the water in Marina Bay where six Ordnance QF 25 pounder Guns on military rafts will let out their load! 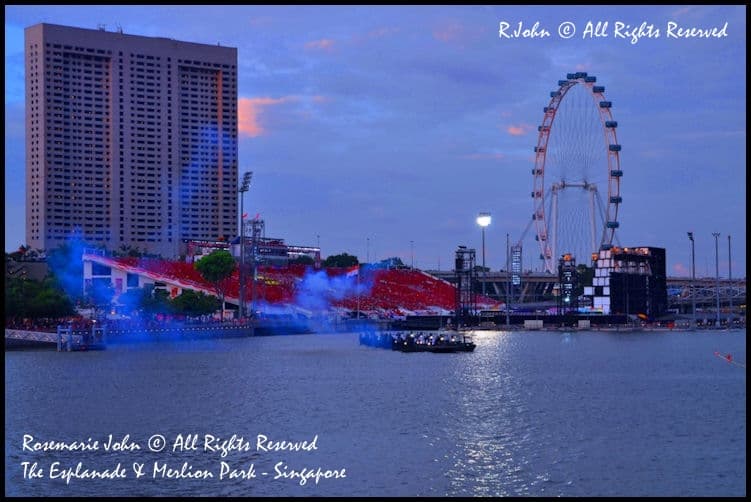 Celebrating Singapore’s 46th year of independence is truly a must see if you are in town. Getting tickets for the viewer stands at The Float@Marina Bay is only possible if you are a citizen or Permanent Resident. Tickets are balloted for months in advance and acquiring them sometimes depends on luck. Independence Day tickets are not sold. The Float@Marina Bay (picture above) is made entirely of steel measuring up to 120 metres long, 83 metres wide, seats 30,000 people and can bear up to 1070 tonnes  of people, stage props and military vehicles. 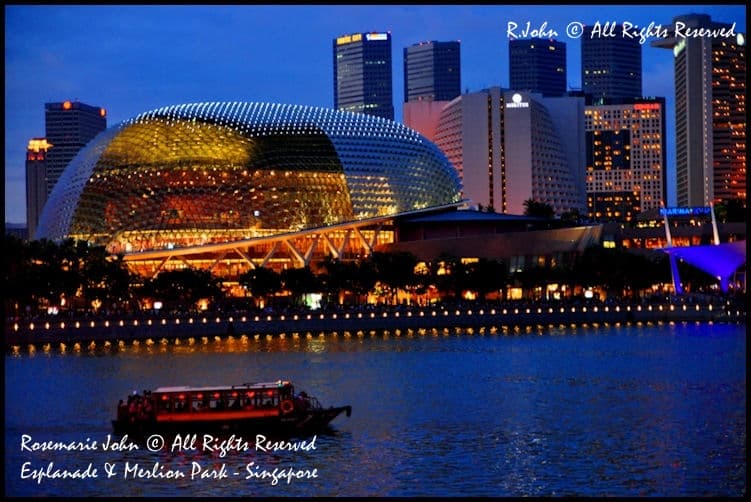 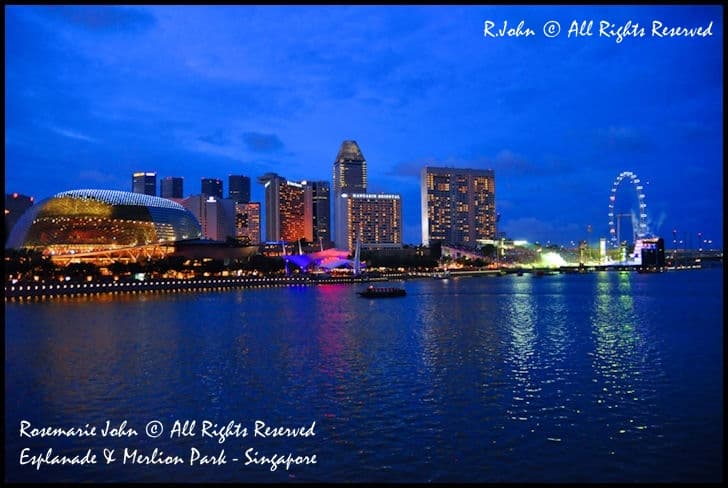 Even if you find that witnessing the ceremonies wouldn’t be possible, head on down to the Esplanade to enjoy the view.  The skyline during sunset is just lovely and you can even opt to sit by one of the many café’s and sip on some cappuccinos while the rays of the sun reflect of the Marina Bay Sands or take a slow walk along the Esplanade Bridge to soak in the sights of the Esplanade – Theatres on the Bay that some local residents refer to as The Big Durian!