A Touch of Culture, Blessings and Wisdom in the Heart of the City 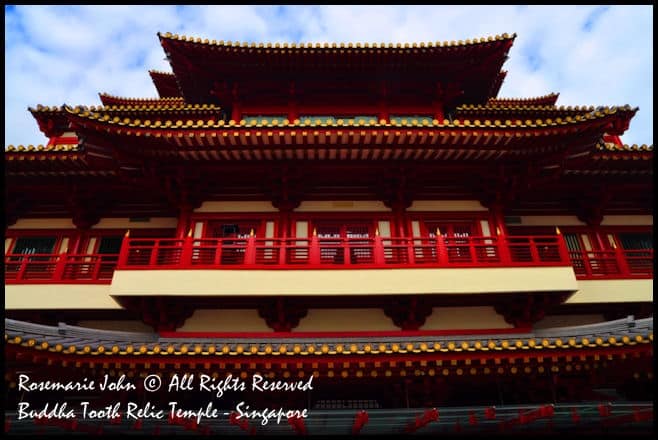 Spiritual calmness and a sense of serenity among the hustle and bustle of Singapore’s city life is what the Buddha Tooth Relic Temple is all about. Located as the nucleus of Chinatown, the temple houses many relics, one of which is a tooth that belonged to Buddha that was originally housed in a golden stupa at the Bandula Monastery in Myanmar back in 1980.

The tooth relic was eventually gifted to its new guardian,venerable Shi Fazhao who then planned the building of the Buddha Tooth Relic Temple in Singapore, so that Buddhists may gather to pay reverence to it and in a way connect with Buddha and hence increase in blessings and wisdom. The temple’s architectural style is based on the Buddhist mandala and integrated with the art culture of Buddhism from the Tang dynasty. Today, the tooth relic is on the 4th floor of the temple and placed in a stupa made from 320kg of gold donated by devotees. Its a must see when you visit the city! 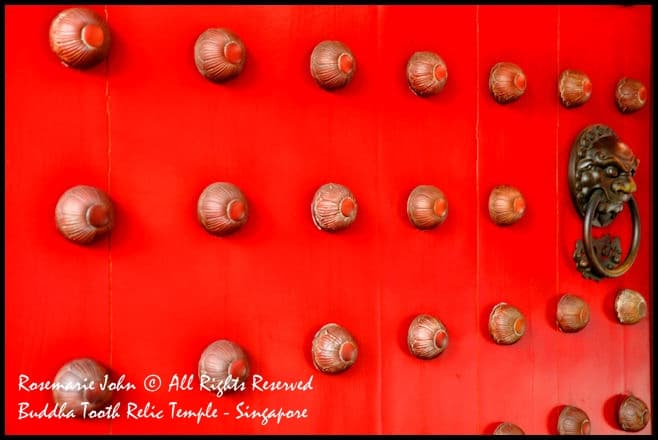 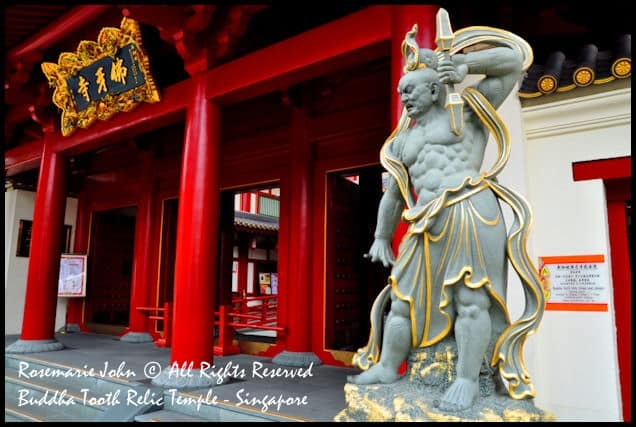 The temple entrance  or gateway has three large red lacquered doors fitted with gilt bronze studs, engraved plates and lion door knockers. Guarding the temple is a Dvarapala (gate guardian statue) which is common in the Hindu and Buddhist religion. Believed to be a protector deity of the Mahayana pantheon, a Dvarapala uses physical force to protect the temple’s cherished values and beliefs against evil. You won’t fail to notice standing tall, ferocious and strong on rocks a Dvarapala naked from waist up, displaying powerful muscles and energetic movement with fiercely scowling wrathful expressions, celestial scarves, a chignon on the head and swirling sarongs. 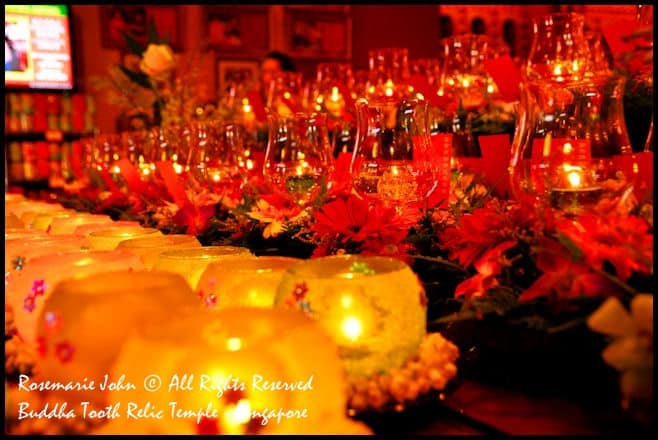 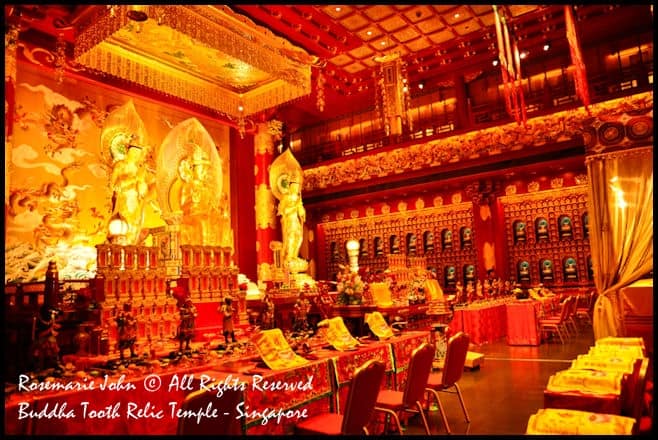 Predominately red in colour, the temple interiors glow in a blend of gold, orange and yellow. A feeling of utter tranquillity overcomes you as you venture through the temple and its many floors. The first thing you will notice is a chance to perform a lamp and flower offering. It is believed that lighting a candle before Buddha brings a bright and smooth journey ahead, while offering flowers brings forth good human-relationships. You can purchase different sizes of these candle and flower offerings ranging from S$5 to S$10. As a traveller, a bright and smooth journey is what we could all do with, so whether Buddhist or not, it doesn’t hurt to make an offering. 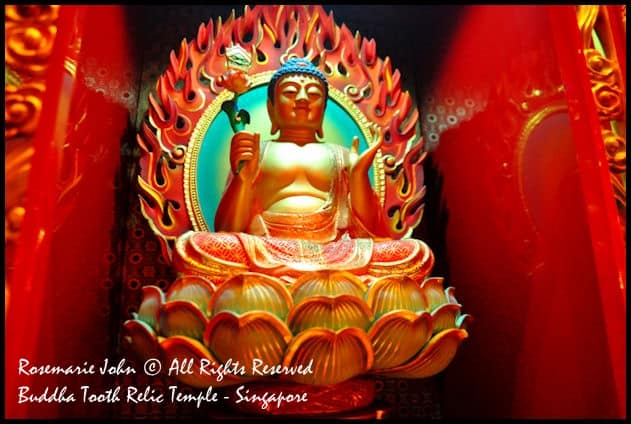 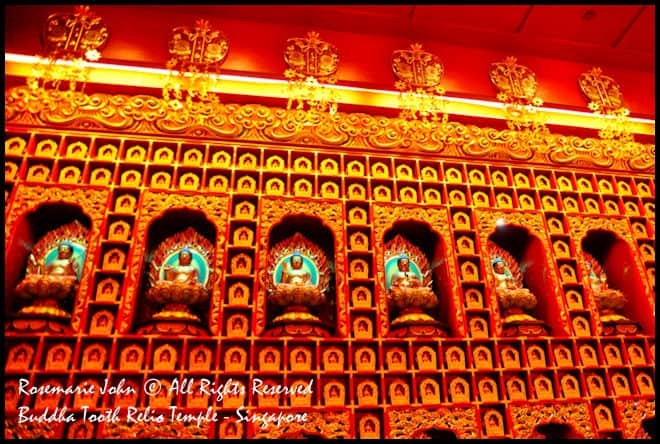 As you go in further into the temple you will notice one hundred Buddha’s that have been individually hand sculptured on both sides of the main hall. Each Buddha is different in posture. The bright turquoise blue that emerges from behind the statue provides a very celestial atmosphere. The mezzanine floor exhibits wax figurines of local and foreign monks of eminence while the second floor is an exhibition hall that houses religious art exhibitions featuring calligraphy, paintings and sculptures.

The third floor is where the Nagapuspa Buddhist Culture Museum is. Here you can learn about Buddhism from different countries namely Sri Lanka, Indonesia, China and Tibet. You can also opt for a guided tour of the museum at 2pm every Tuesday and Thursday except for public holidays. The tour is free-of-charge and conducted in English but make sure to register in advance through their official website. 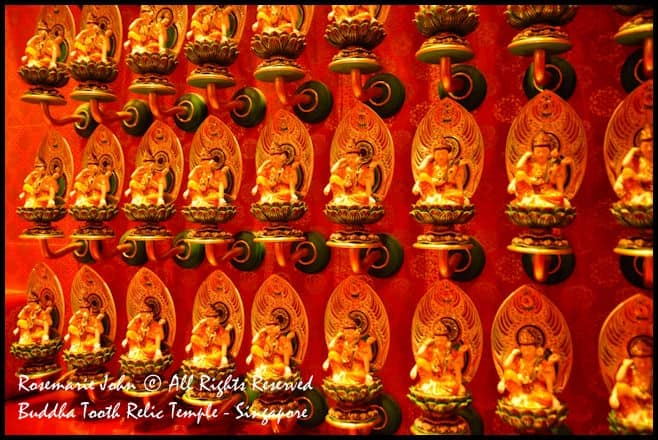 The fourth floor is the sole reason for the temple’s name. A serene chamber with the sacred Buddha’s tooth relic in the centre of focus is where many devotees prostrate themselves to pray and meditate. No photography is allowed on the fourth floor and footwear has to be removed before entering this spiritual abode. The chamber of the tooth relic will have its curtain raised twice a day for all in the public area to view the inner chamber and the Sangha (ordained Buddhist monk). The tranquil prayer area is ideal for anybody to just sit down and self reflect or pray. Its truly a peaceful place to get away from the daily grind. 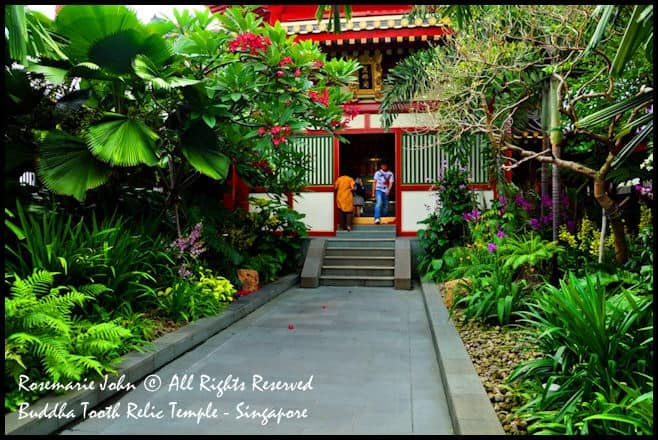 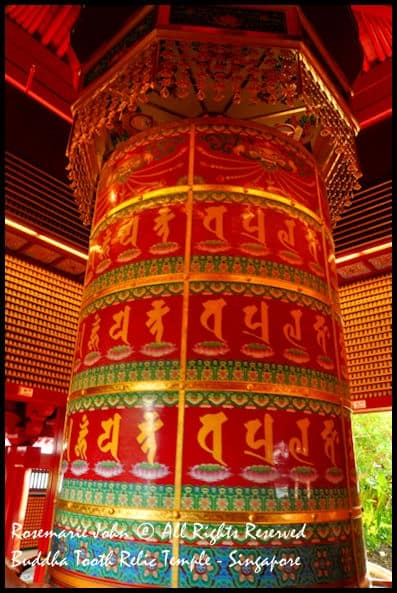 If the indoors is not your thing, head on up to the roof for some tranquil moments of your own. Here, you will find a beautiful garden filled with purple orchids and a Prayer Wheel in the centre. Cylindrical in shape, the wheel is a religious artefact commonly used by Chinese Buddhist. The rim of the prayer wheel is embossed with esoteric Vairocana Mantra (repetitive prayer) and every turn of the wheel represents a single recital of the mantra. Located at 288 South Bridge Road Singapore, The Buddha Tooth Relic Temple and Museum in Chinatown is open daily 7am to 7pm. Admission is free.