Golconda – Echoes from an Ancient Kingdom 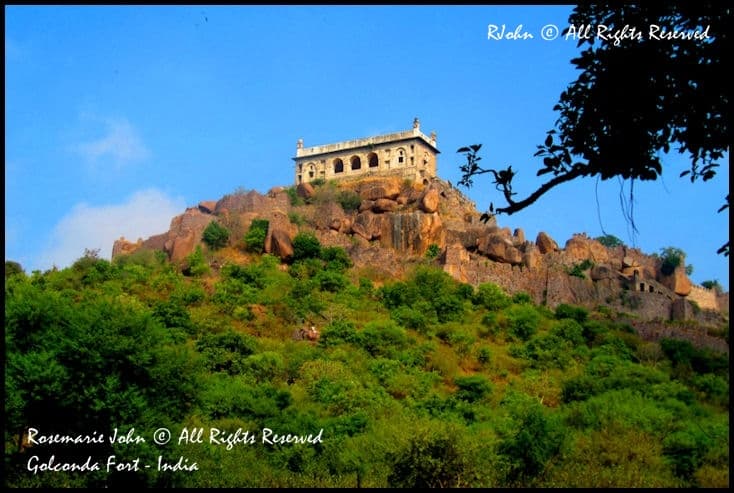 Deep within the Old City of Hyderabad lie the ruins of the magnificent Golconda Fort. A city that gave the world the famous Koh-i-Noor and Hope diamonds… A city that time forgot. Over four hundred years old and situated on a hill 400 feet high, the fort of Golconda reaches for the sky gleaming in its past glories.

Originally a mud fort and later constructed in stone, Golconda today  is a ruined  city located 11km west of Hyderabad. A land locked region and heavily funded by the diamond trade through its own mines within the walled city as well as neighbouring areas (Kollur Mine), Golconda has always been an interest to invading dynasties back in the day. 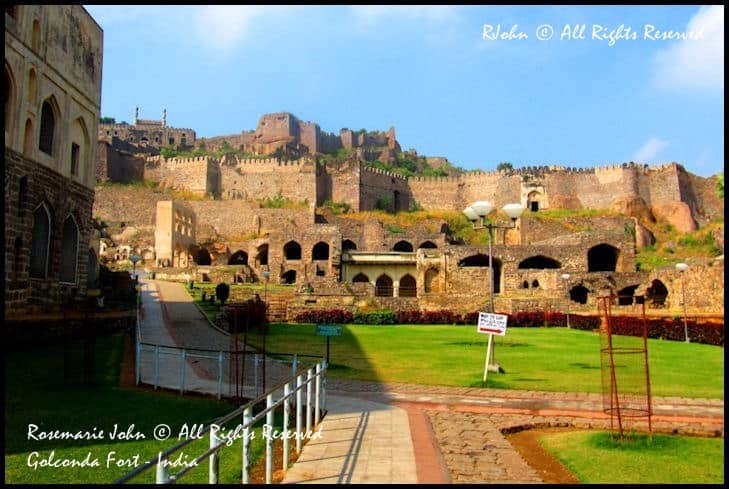 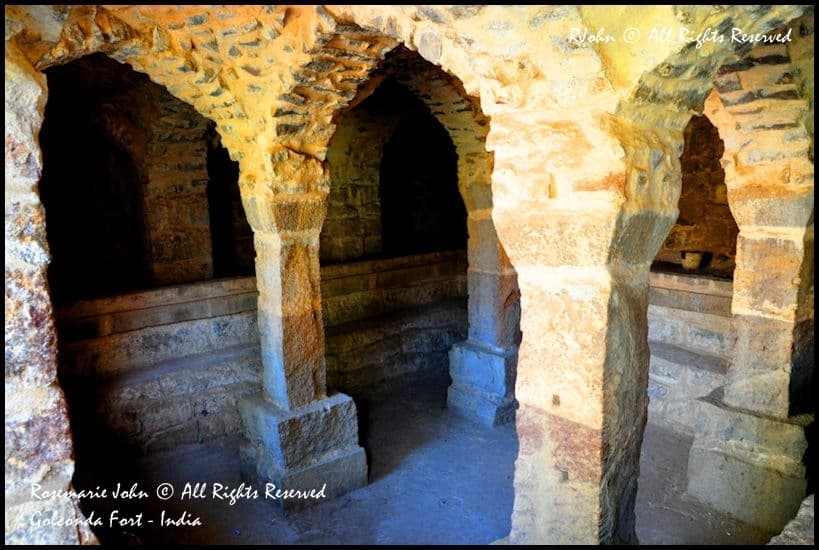 Believed to be initially built as a mud fort by the Kakatiya Dynasty upon the discovery of an idol on the hill, its control was soon taken over by the state of Warangal. Conquered by the Islamic Bahmani Sultanat later on, the fort became an important stronghold of the Bahmani Kingdom. After the collapse of the Bahmani Dynasty, it was won over by the Qutb Shahi Kings from the Turkic Dynasty of strong Persian influences. During the reign of Ibrahim Qutbshah, the ramparts of the fort were strengthened by stone and mortar.

Golconda rose to prominence as the seat of the Qutb Shahi Dynasty over a period of 62 years. The fort was further expanded by the first three Qutb Shahi kings into a massive fort of granite extending around 5 km in circumference with a 7 km outer wall that enclosed the city. The state became a focal point for Shia Islam in India. 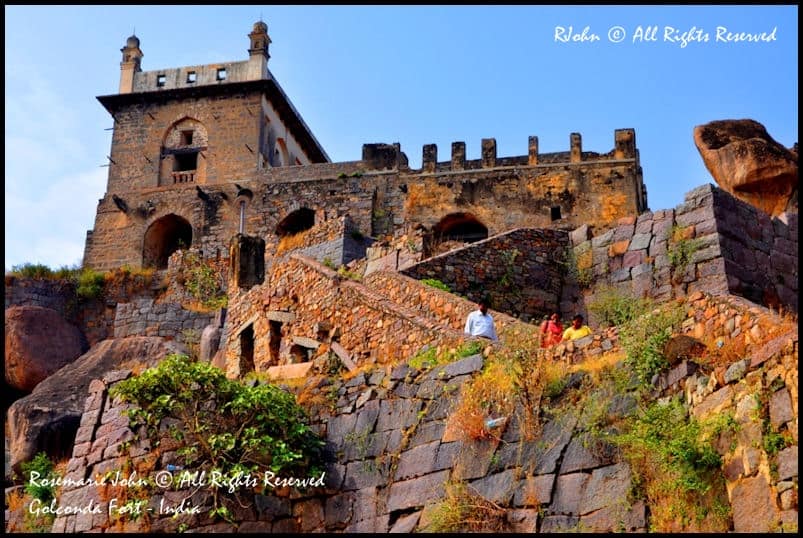 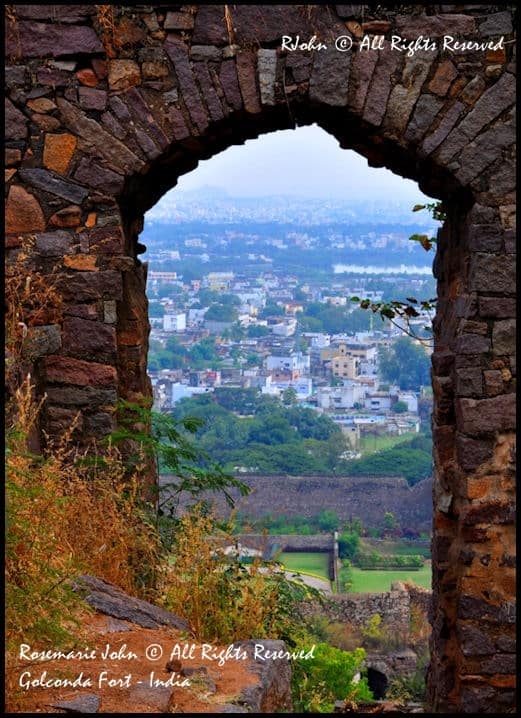 The royal palace complex consists of buildings constructed by the Qutub Shahi Kings during different periods. Known for their architectural excellence, their construction style and décor can been seen in Golconda’s four forts, huge halls, vaulted cellars, mosque and audience hall.

When this impregnable construction  of the Deccan was attacked by the Moghal forces under Prince Muhammad Azam, a further bastion was erected bringing the elevation of the fort to 400ft. The circumference of the fort  wall was 4 miles containing 87 semi-circular bastions, 50ft to 60ft high made from granite blocks weighing close to a ton each.

The fort eventually contained eight huge gates which were studded  with sharp iron knobs intended to prevent elephants from battering them in. The fort finally fell into ruins after a siege lasting nine months and its eventual fall to Mughal Emperor Aurangazeb in 1687. 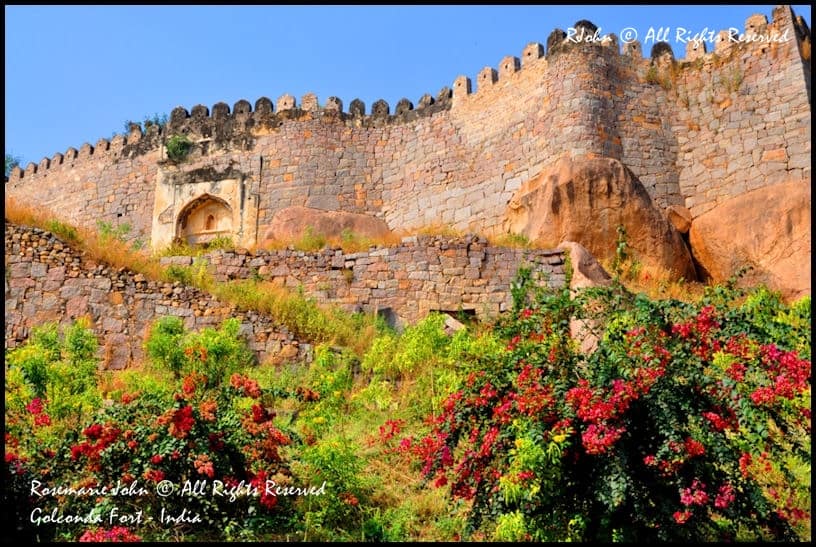 Some of the interesting monuments and features…

One of the most important features of this fort is its signalling device. The sound of hands clapped at the Balahissar Gate (entry gate) can be heard quite clearly at the top of the hill at the Citadel. Brilliant architectural planning is also evident from the fort’s ventilation system which is designed to let in bouts of fresh cool breeze, a respite from the scorching humid summer of Andhra Pradesh. 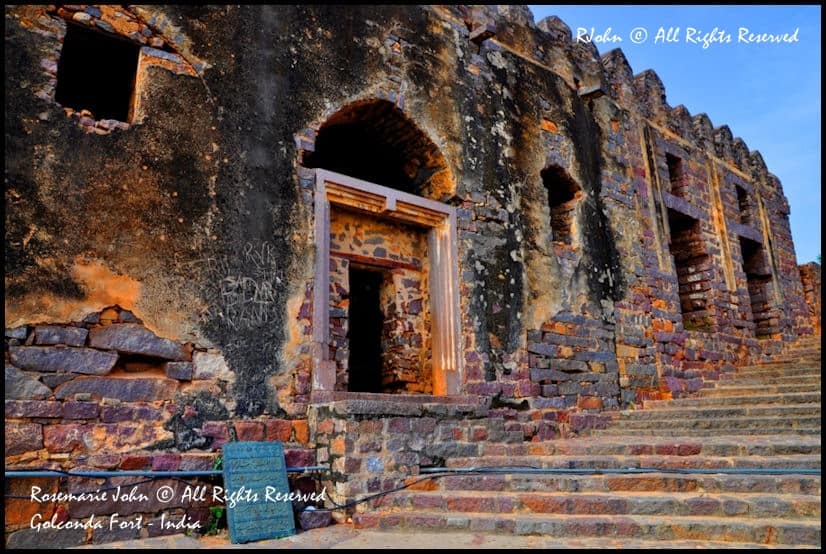 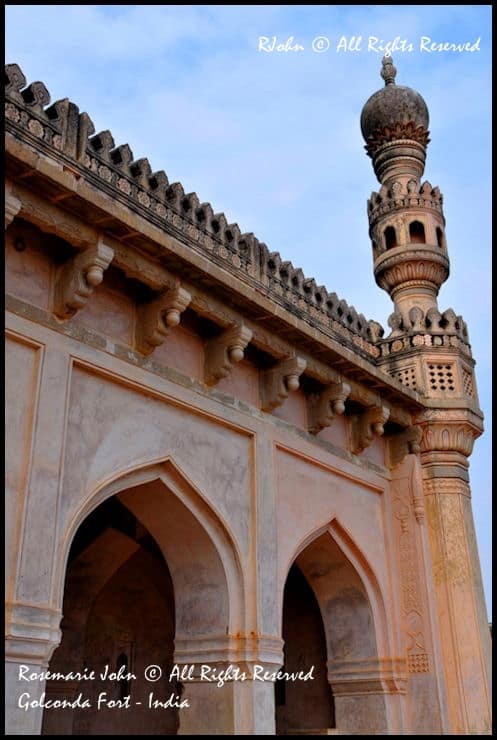 The granary called Amber Khana still stands till today. An inscription in Persian records state that Khairif Khan, a servant of court constructed this building in 1642AD during the reign of Sultan Abdullah Qutub Shah. The beautiful light pink Qutub Shahi Mosque towers over the fortified ancient city on top of the hill. It was built by Sultan Ibrahim Qutub Shah who ruled from 1550-1580 AD. 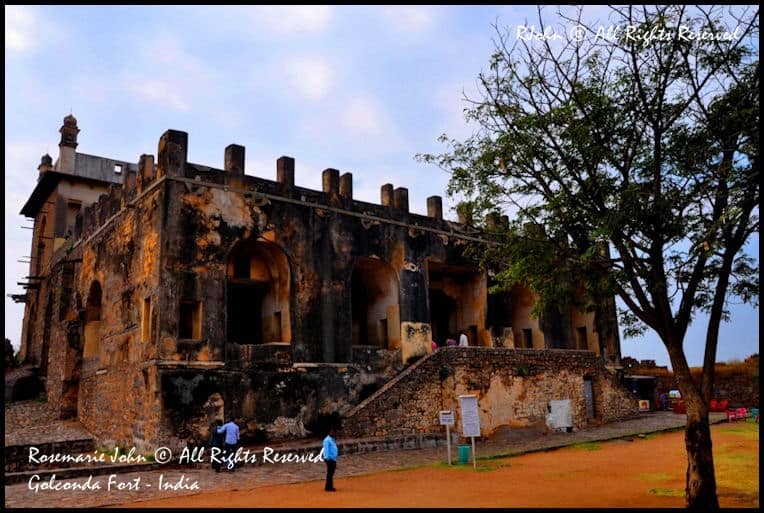 One of the best preserved monuments is the citadel (Baradari), a two storey building with an open terrace on the top, where Qutub Shahi Kings used to enjoy the surrounding view of the country side.In one of the corners of the citadel lies a secret subterranean passage which leads to Gosha Mahal. With a distance of 5 miles (8km), the passage way was used by the kings on occasions of emergency and danger. 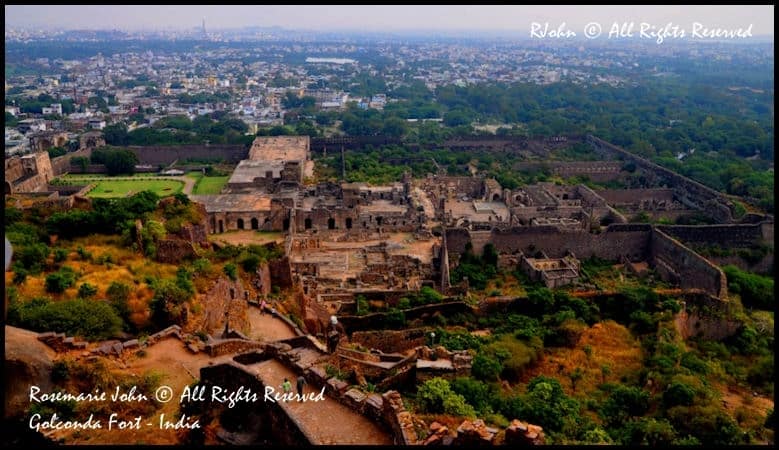 The camp where Emperor Aurangzeb may have pitched during the last siege of Golconda can be seen on those historic hillocks on the northern outskirts of the fort at a distance of about 2km on the road to Sholapur. It is also said that just a thousand spaces ahead of Patencheroo Gate, lay the tombs of the Golconda Kings. 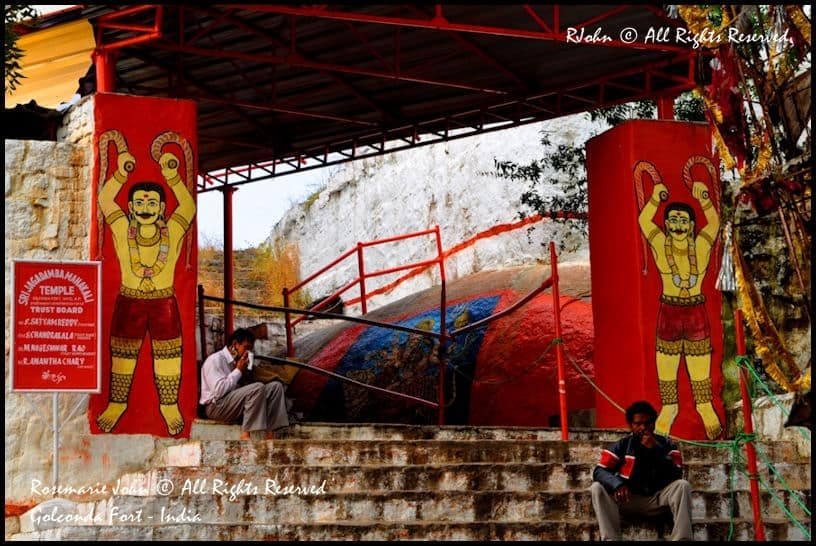 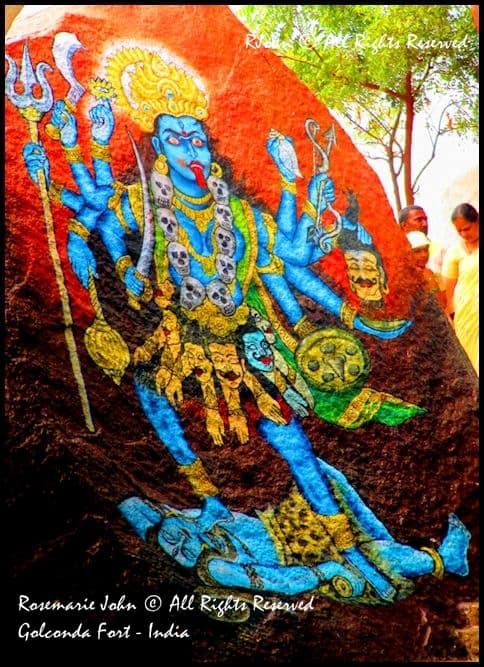 The fort also is home to a modern day Hindu temple called Sri Jagadamba Mahakali. It is not stated whether this temple was erected in the ancient site of the Madanna Temple built by early Dravidians and the Warangal Kings.

The ancient Madanna Temple is said to be a striking proof of the toleration of Islamic Kings who allowed its existence  in close proximity to their own residence and mosque. Nevertheless, the paintings of Goddesses on stone is quite intriguing and worth exploring.

It is truly an interesting ancient city to visit if you are visiting Hyderabad, however be prepared for badly maintained surroundings. Rubbish and graffiti can be spotted everywhere while some areas near the modern day Hindu temple and mid way up the hill boasts an unfriendly stench of urine. Vandalism is seen mostly everywhere you look with hacked or spray painted names of uncouth people on the beautiful old walls. 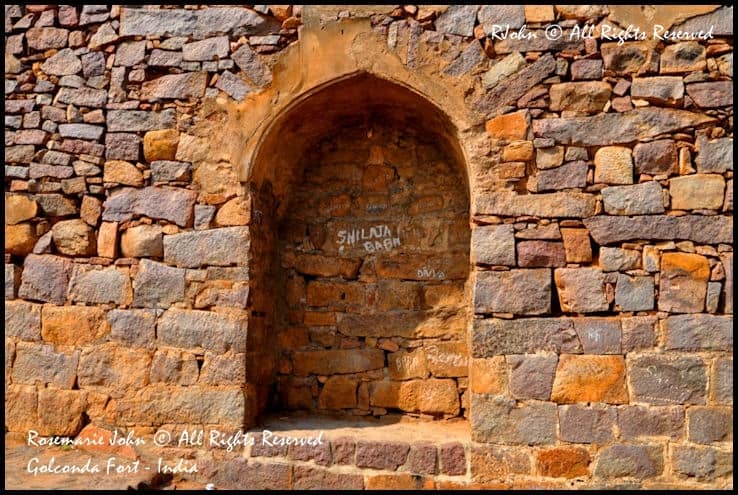 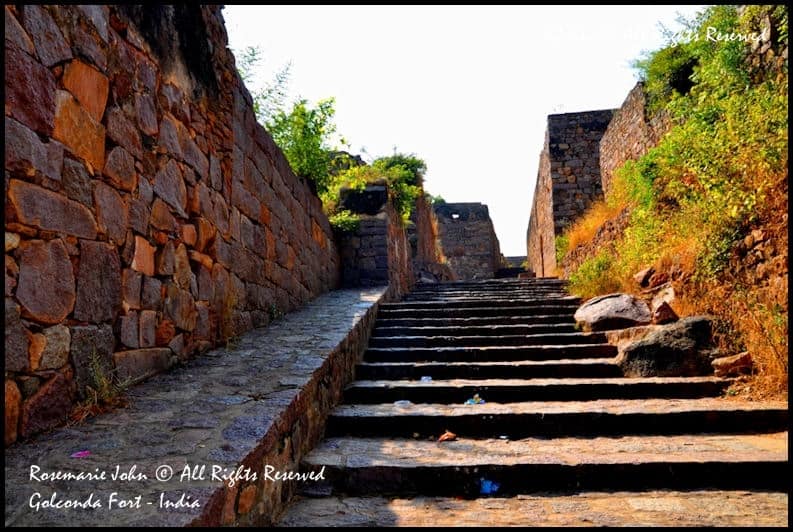 Open 9am to 5pm daily the entry fees are Rs120 for an adult and Rs100 for a child. There is a further charge for cameras at Rs25 each. At the ticket booth, travellers will be “adviced” to take on a Guide, but if exploring the city on your own terms without someone constantly talking and possibly feeding you fake stories isn’t your cup of tea, just opt to explore the ancient walkways on your own. You can read up on its history before hand.

Travellers start their journey of the extensive fort grounds at the Balahissar Gate that has an ornamental arched niche with peacocks and lions, a blend of Hindu-Muslim architecture. 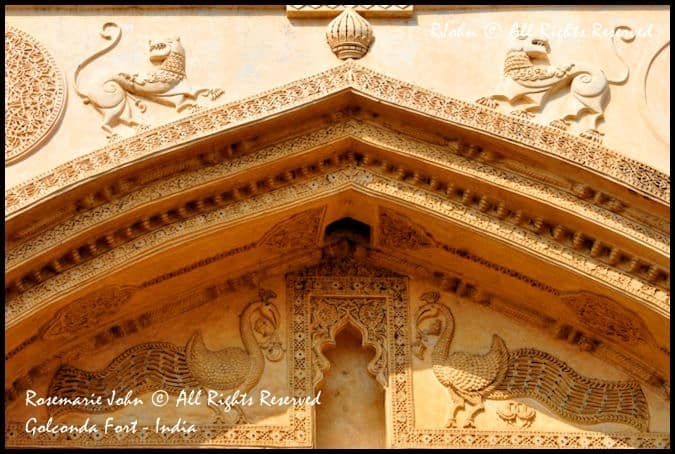 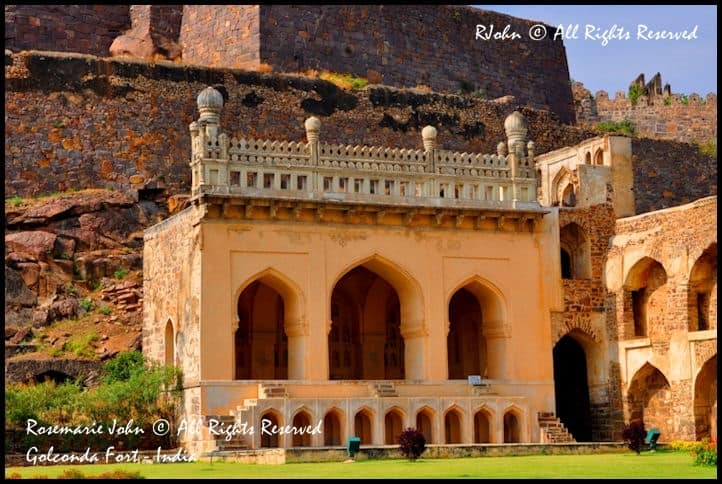 Golconda Fort is located opposite the Army Quarters, Golconda, Hyderabad 500008.