The Colourful Bangles of Hyderabad 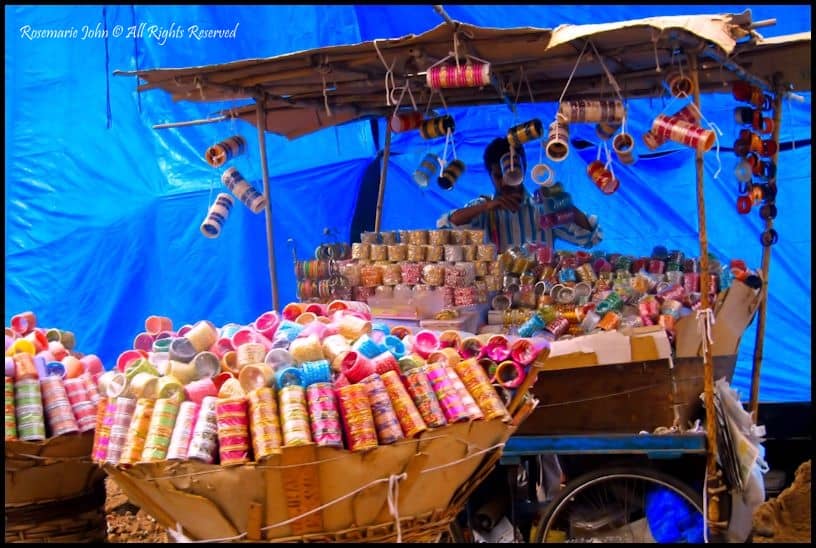 Going far back as 2600 BC, bangles have been excavated from the Indus and Mohenjo-Daro valleys of old. Made from sea-shells, copper, bronze, agate and chalcedony in ancient times and worn specifically for religious customs and rituals, bangles have come a long way out of India and Pakistan.

Today, bangles made of glass, plastic, gold, silver and other metals are worn internationally for one common purpose – to accessories and beautify! From a blushing Hindu bride to a tank top and jeans modern day Gucci gal, bangles have become a fashion statement!

But what were their original purpose?

While traditional Hindu values consider it inauspicious for a married woman to be bare armed, there are other customs with beliefs that a bride should wear as many bangles as possible at her wedding with the notion that the honeymoon officially comes to an end when the last glass bangle breaks.

Indian women also wear over a dozen bangles daily even when dealing with day-to-day chores holding on the an ancient belief that bangles bring good luck to their husbands. Though it may come off as silly superstition, some women in India are so superstitious, that they never allow their arms to be completely bare while changing bangles. A string or the end of their sari is tied around their arm until a new set of bangles are worn.

In India, bangles are recognized differently by different clans. In Punjab, a married women wears a set of ivory bangles called Chooda on each hand for 21 days, or even up to a year after marriage while in rural Rajasthan, women wear ivory bangles from their wrist up to their upper arm for the rest of their lives or until their husbands demise. In the western state of Maharashtra, green coloured glass bangles are a sign for married women while red coloured glass bangles are a symbol of well being and marital status in other parts of the country.

Along with old customs come new trendy ideas on what bangles are. With it’s sole purpose of being decorative jewellery in the 21st century, multi-coloured bangles are worn by women of all ages throughout the world.

Laad Bazaar in Hyderabad is an old historic market that specialises in bangles. Located in the Old City, the bazaar is situated on one of the four main roads that branch out from the towering Charminar, a landmark monument of the city.