Climbing Up the Pylon Lookout in Sydney

Got the energy and crave for great photo opportunities or just the feel of wind in your hair as you gaze the scenic panorama? Head over to the Sydney Harbour Bridge Pylon Lookout! Not for the faint-hearted, the climb up 200 stairs brings you eighty-seven metres above the harbour offering the best visual percepts of the city.

With breath-taking views on all sides, the Sydney Harbour Bridge Pylon Lookout is one of those spots that isn’t frequented as often as the Sydney Tower Eye Observation Deck purely due to the lack of elevators. Even-though it lacks modern infrastructure to ease one’s way up to the top, it more than makes up for its open space and ability to admire the sights devoid of glass windows. 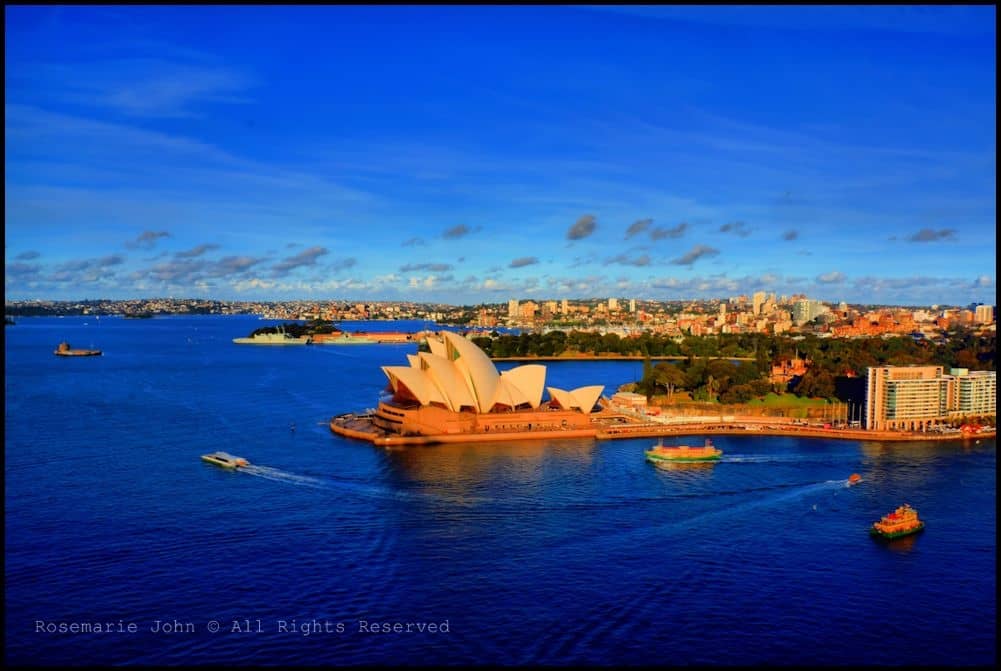 On the way up visitors will pass three levels of historic displays, focusing on the vision of chief engineer JJC Bradfield, the dangerous work of building the Bridge and the controversy of the opening ceremony that was hijacked by Captain Francis de Groot of the New Guard. Apart from offering facts and figures of the magnificent construction history, stopping to read the displays is a convenient way of catching your breath before heading up the next flight of stairs.

Once on the top, the glass view finder at the 360-degree observation area will guide you to locate Sydney’s surrounding suburbs. Overlooking the World Heritage listed Sydney Opera House, you can also see as far out as the Olympic Stadium in Homebush Bay and the Blue Mountains. Not tall enough? Fret not, as there are stands on all sides of the Lookout to get on to give you that extra height needed to soak in the sights. 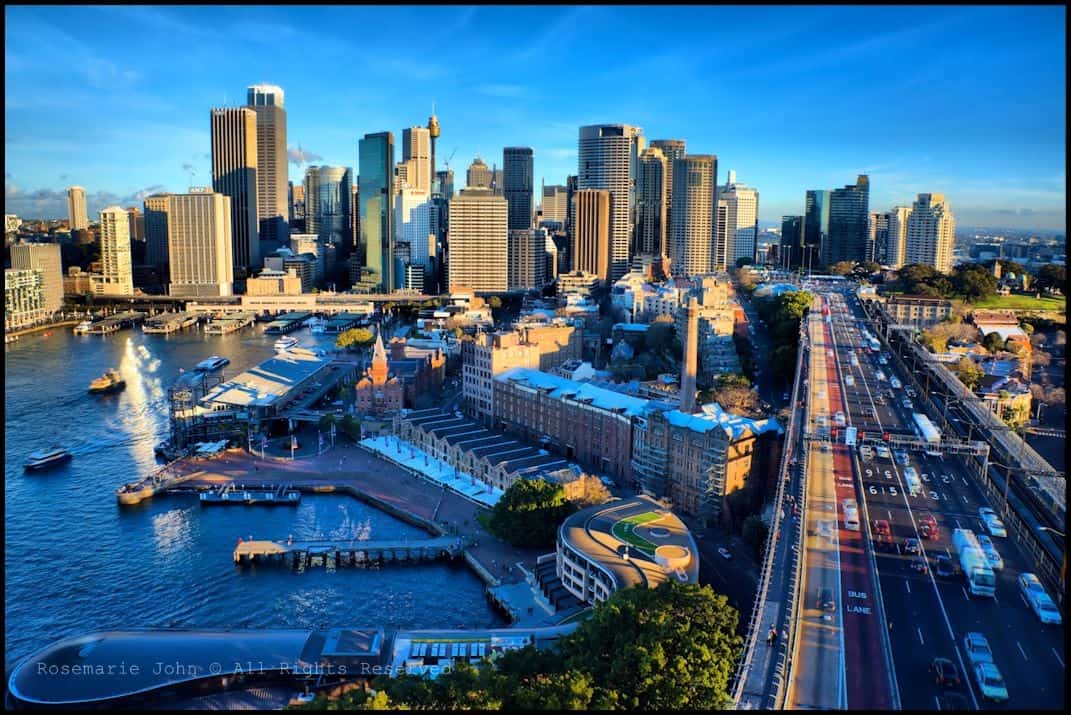 It can get pretty chilly during winter so make sure to bring a sweater along.

A bit of history…

The four impressive, decorative 89 metre high pylons are made of concrete and faced with granite. The granite was quarried near Moruya where about 250 Australian, Scottish and Italian stonemasons and their families lived in a temporary settlement. Three ships were specifically built to carry the 18,000 cubic metres of cut, dressed and numbered granite blocks, 300km north of Sydney.

What is interesting is that the Harbour Bridge’s four pylons serve no real structural purpose. In fact, they don’t even touch the Bridge except at road level. The pylons were added to provide aesthetic balance while the full weight of the Bridge is supported by massive steel posts and abutments housed in the base of the pylons.

While all four pylons are put to good use, only one is accessibly by the public. The south-western tower is used by traffic authorities and the two northern towers serve as air vents for the Harbour tunnel. The south-eastern tower is home to the Sydney Harbour Bridge Pylon Lookout, which includes a museum and detailed history of the Sydney Harbour Bridge. 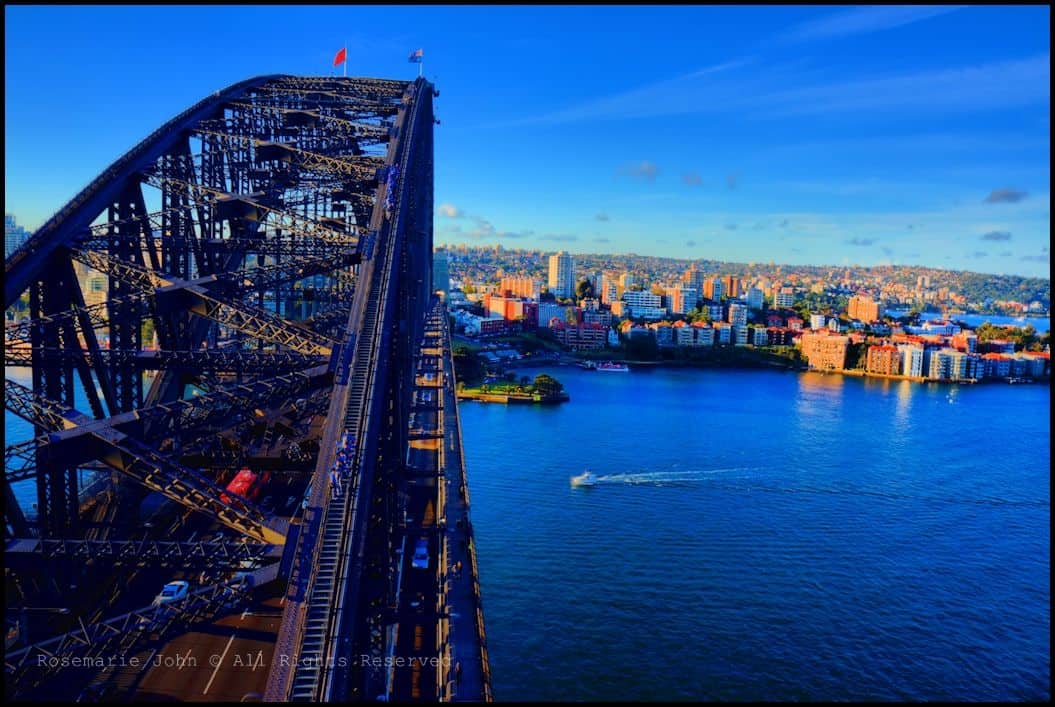 The Sydney Harbour Bridge Climb is another option offering a more adventurous route! 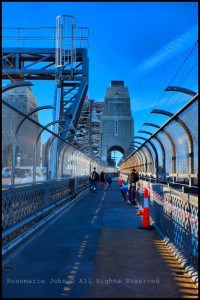 Entrance to the Pylon Lookout is on the pedestrian pathway on the Eastern side of the Harbour Bridge from the city side.

If you are on George Street, turn left into Argyle Street and climb up to Cumberland Street via the Argyle Stairs. Turn left and cross to the other side of Cumberland Street. Use the “Bridge Stairs” to access the pedestrian pathway. If you are coming from the North side of the city, use the steps near Milsons Point Railway Station.

Open seven days a week from 10am to 5pm, admission tickets cost $15 for adults and $6.50 for children between 5-12 years of age. Inclusive in the ticket cost is a complimentary photo against a backdrop that provides a feel of sitting high up on one of the steel bars of the Bridge just like the construction workers used to back in the day.