Hierapolis – A City of Water and Belief 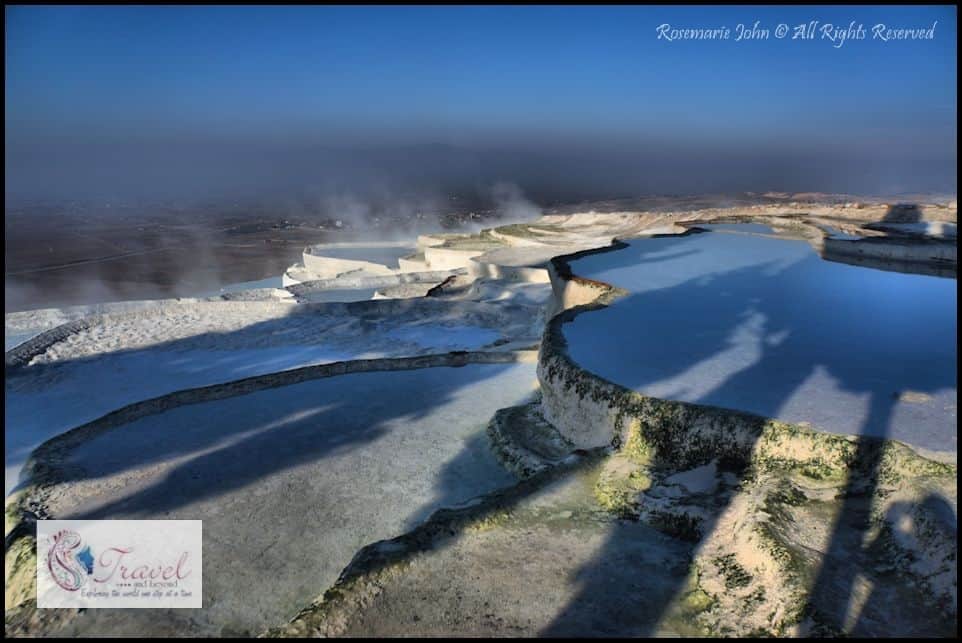 Hierapolis.  A city where the ancient people believed was founded by the god Apollo. A Hellenistic city that focused on its natural sources of thermal waters. A city so vast that brought about the visit of St. Philip in his mission to spread Christianity. Eventually crucified upside down at Hierapolis under the persecution of the Roman emperor Domitian (A.D. 81-96), Hierapolis (modern Pamukkale) is still famous for its travertines, hot springs and ancient Greek ruins and tombs till this day.

“Hurry up along!” shouts our guide as we walk down the stretch of Necropolis (The city of the Dead). Flanked by limestone tombs on both sides of the uneven pathway, it was interesting to view the different kinds of funerary buildings and graves that extended for over two kilometres. As we were on a tight schedule, we hurried along past the Necropolis to enter the city through the Northern Roman Gate.

We passed the agora, baths, baths that were converted into churches, and latrines which were a sign of prestige for a city. Yes, having public toilets denoted the wealth and power of a city back then. Once out through the North Byzantine Gate, walking pass the remnants of the Nymphaeum of the Tritons (a monumental fountain), did we realize how beautiful the city must of been in its heyday.

Though we missed the ruins where a magnificent cathedral once stood and the ruins of the Martyrion of St. Philip, it would be interesting to note how Christianity eventually took hold in the city as the official religion in the 5th century AD. Hierapolis is only mentioned once in the Bible, when St. Paul praises Epaphras, a Christian from Colossae, in his letter to the Colossians.

The city ultimately fell into decline in the 6th century, and the site became partially submerged under water which eventually created deposits of travertine. Hierapolis was finally abandoned in 1334 after an earthquake. However, excavations soon began to uncover Hierapolis in the 19th century.

The thermal waters were directed to the gleaming white travertine terraces where visitors can submerge their feet in. The layers of white calcium carbonate, built up in steps on the plateau, gave the site its name –  Pamukkale meaning “cotton castle” in Turkish.

During winter, as visitor numbers reduce, the water supply is turned off at certain areas. However, those who still care for a warm dip, can do so at Cleopatra’s Sacred Pool. Filled with old marble ruins, this pool is said to be one of the numerous spa baths that existed during Hierapolis’ position as a Healing Health Centre centuries ago.

An unreal landscape, made up of limestone ruins, mineral forests, petrified waterfalls and a series of terraced basins makes the end of a rather quick walkabout through Hierapolis a truly memorable one. 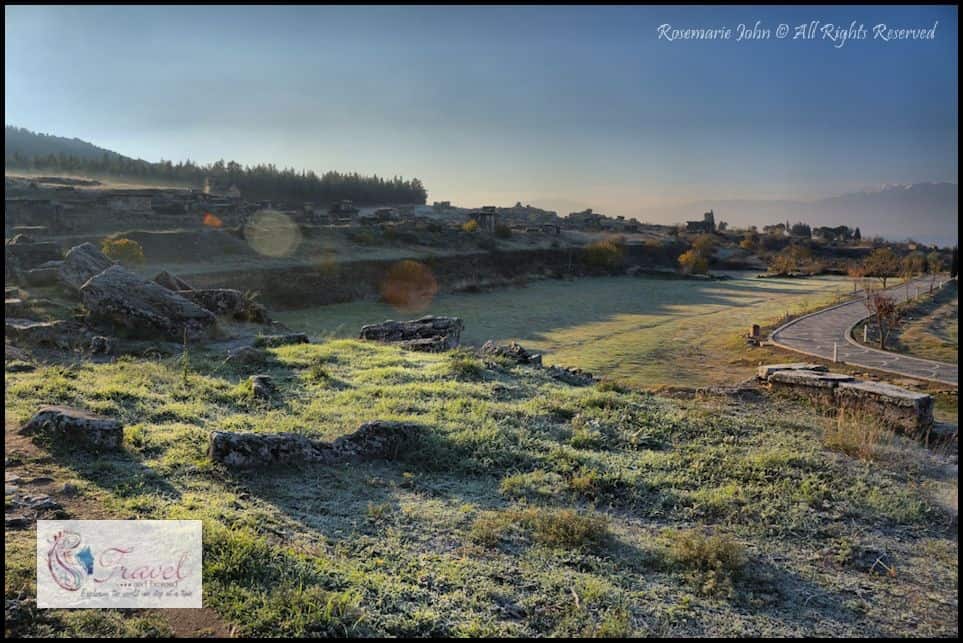 The beginning of the largest necropolis in Anatolia 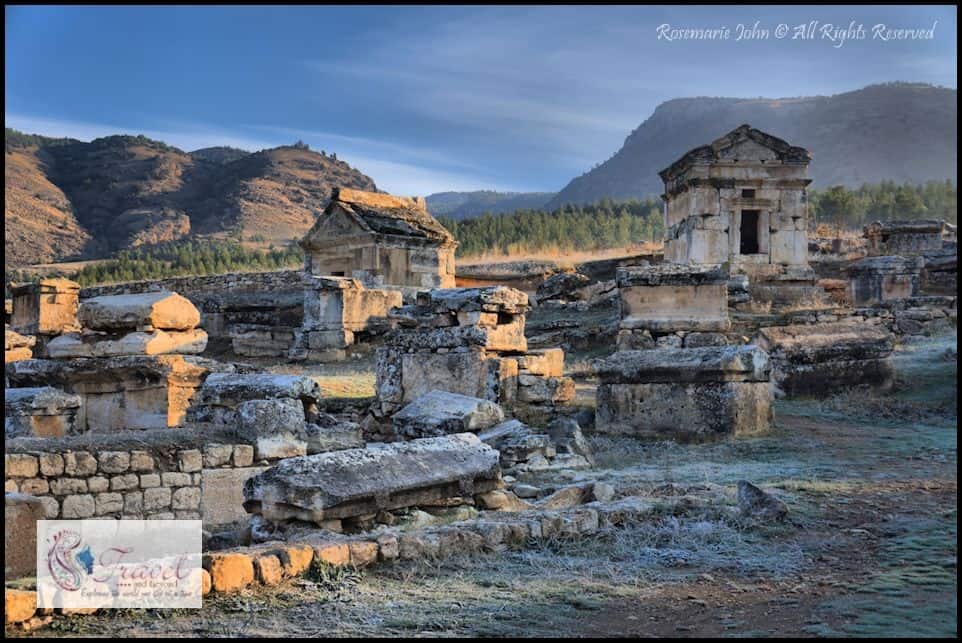 The necropolis has 1,200 tombs of various types, including tumuli, sarcophagi and house-shaped tombs from the Hellenistic, Roman and early Christian periods. Some have Jewish inscriptions 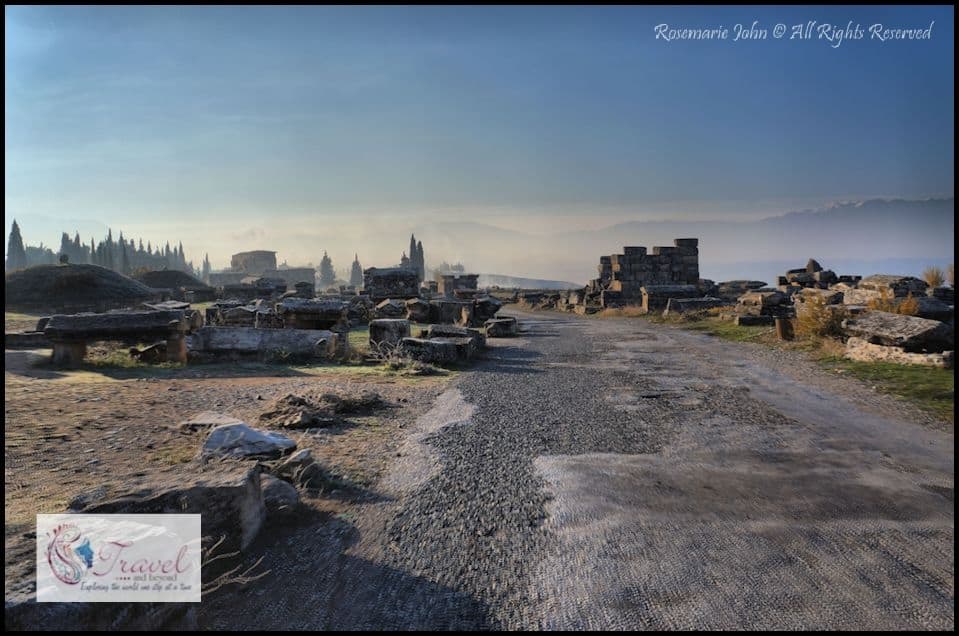 The road leading to the main city 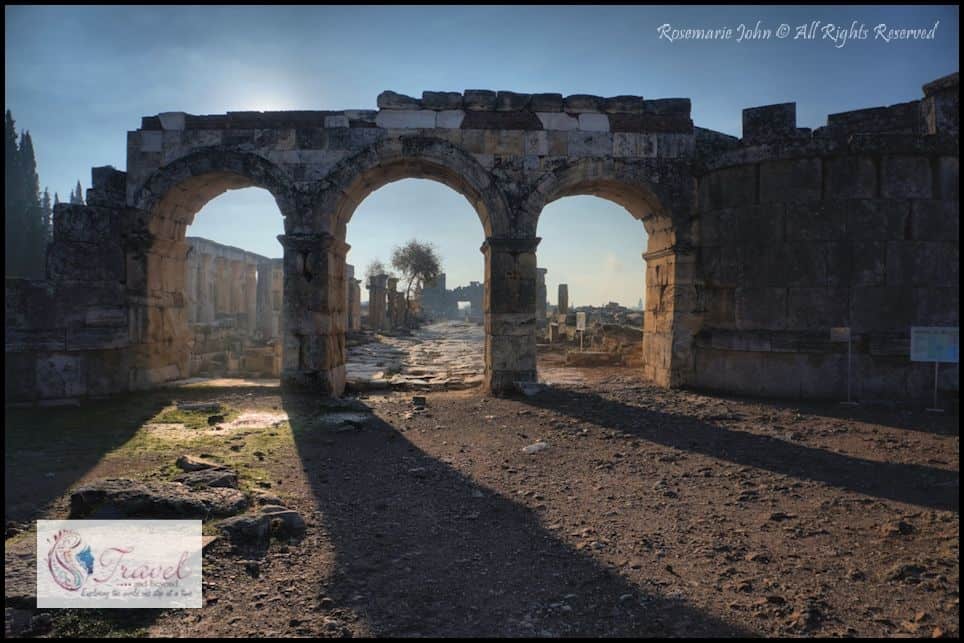 The Northern Roman Gate was the main gate to the city during the Roman period. This gate led to Laodicea and Colossai 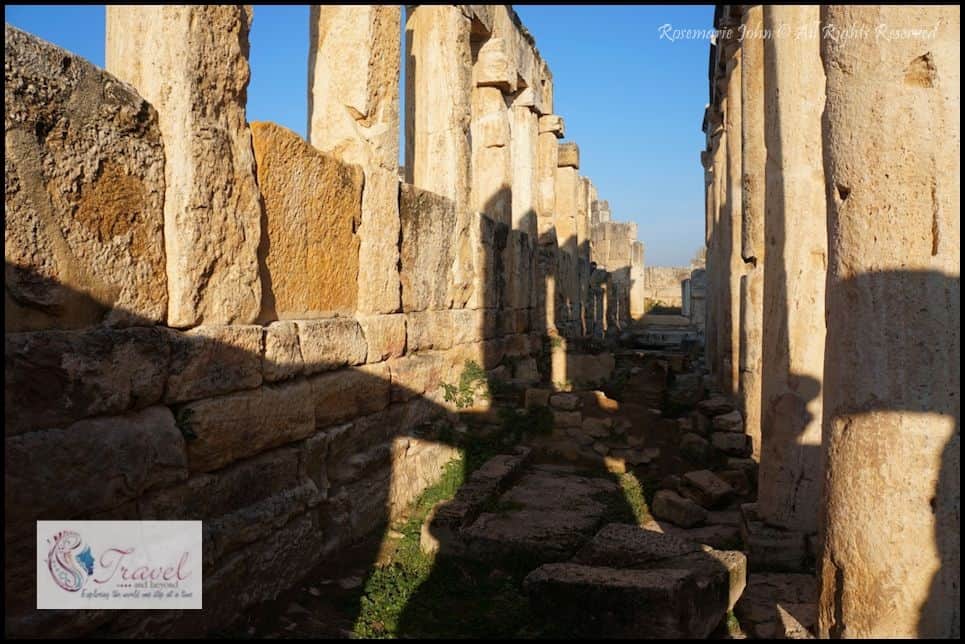 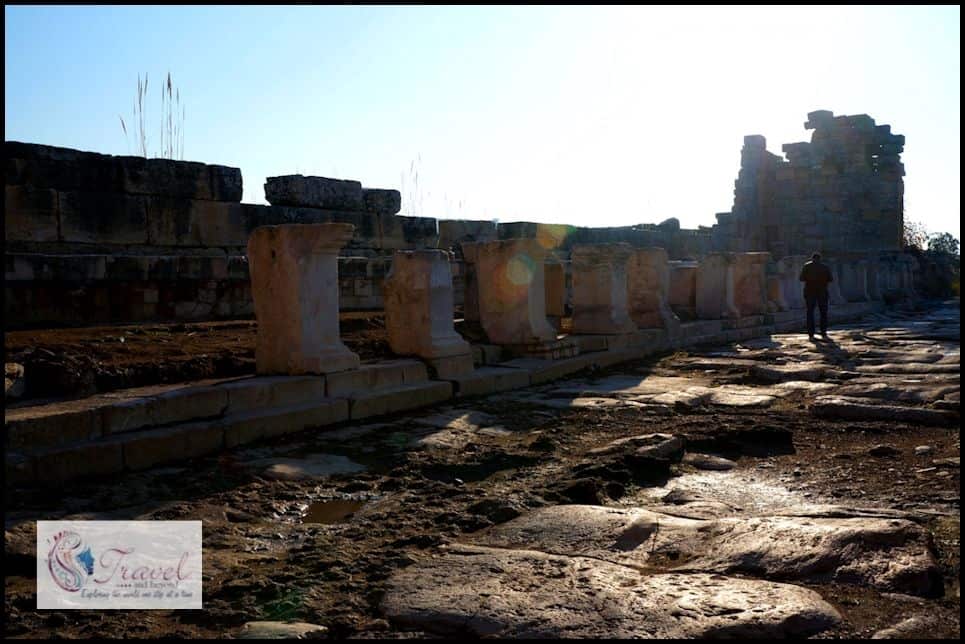 The Nymphaem of the Tritons was built at the end of the 3rd and the beginning of the 4th century AD on the main street. All that is left are the pillars 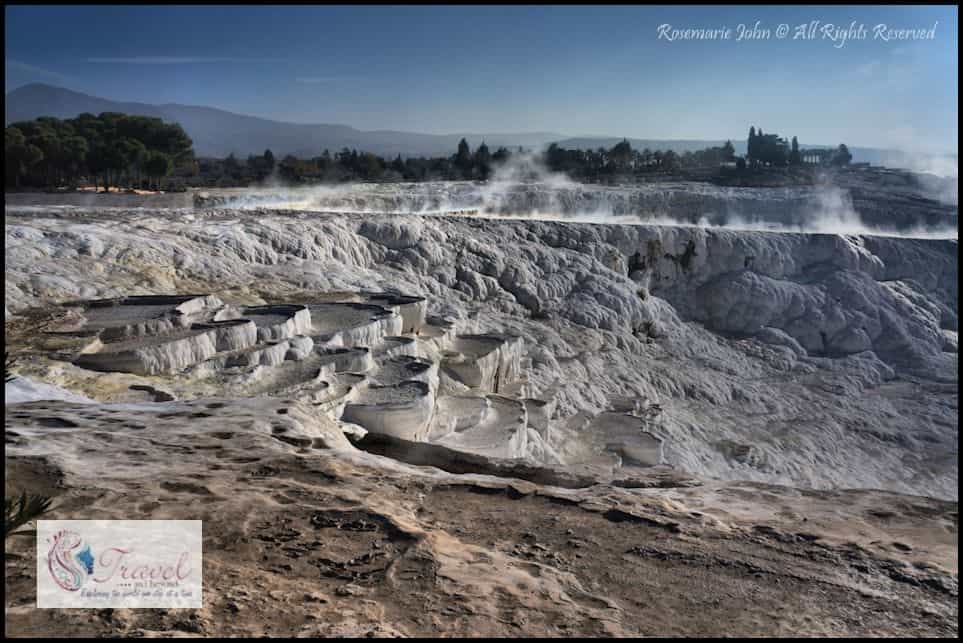 The hot springs at Hierapolis (which still attract visitors today) were believed to have healing properties, and people came to the city to bathe in the rich mineral waters in order to cure various ailments 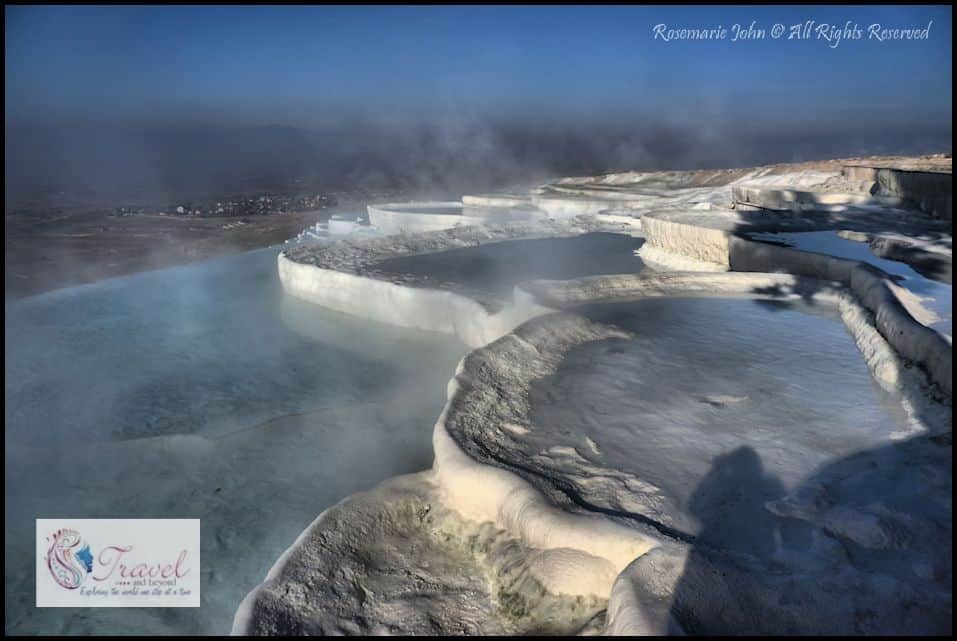 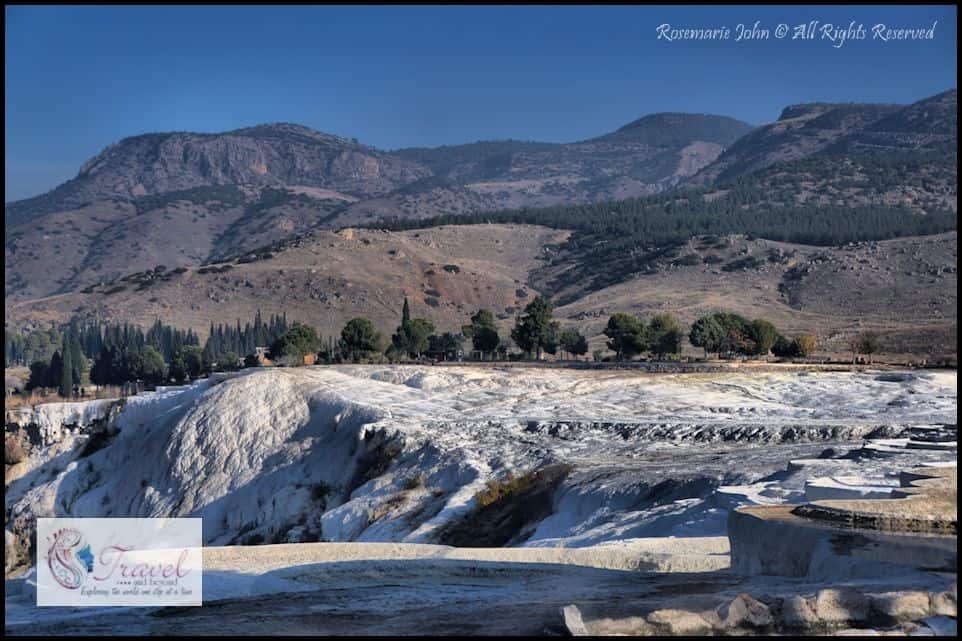 The beautiful landscape that confronts you when you reach the travertines