The Remains of a Greco-Roman City – Aphrodisias 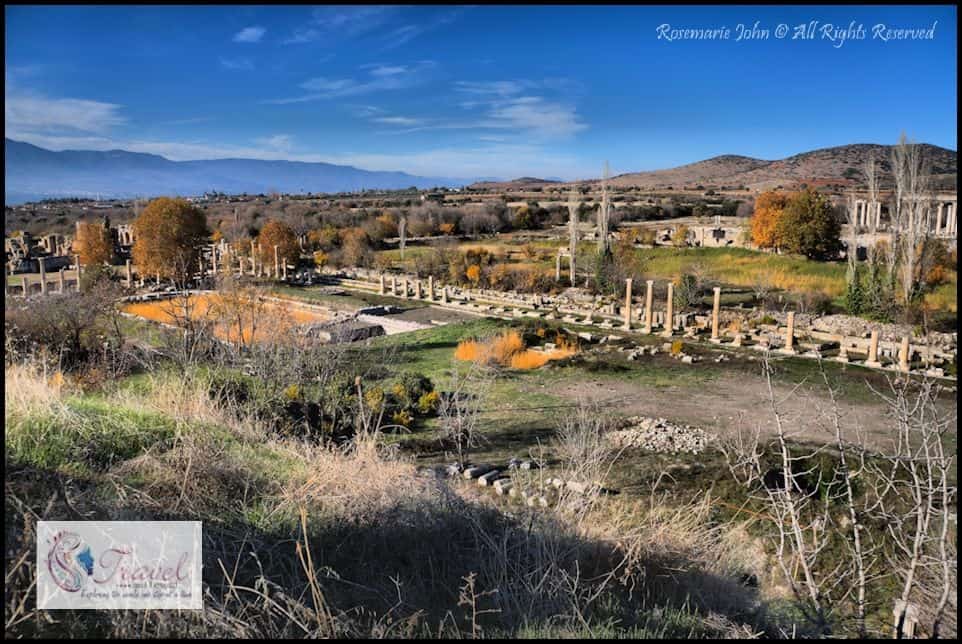 I never get tired of ruins and in an ancient Greco-Roman City like Aphrodisias, it’s pretty hard not to get absorbed into the lost world that once worshipped the mythical Goddess of Love – Aphrodite.

Located about 150 kilometres east (inland) of the Aegean Sea with the snow covered peak of the Babadag mountain range as backdrop in the ancient city of Caria (called Geyre in modern times), the world of marble sculpting, architecture, theatre and politics come alive. Walking through the vast expanse of Aphrodisias during winter, allowed for breath-taking photography sans the tourist hordes that you would find during summer. See photos below.

“The ruins are magnificent”, said Joseph as we stopped to admire the colossal gateway in front of us. If you’re anything like us, walking around ruins and reading informational boards in the cold sharp winds would be a highlight of your trip. But if old marble ruins and broken statues aren’t your thing, then Aphrodisias may not entice you.

We walked and walked and walked. Uphill, downhill, along slippery terrain but it was worth it. Being amidst such historical monuments and to be able to gaze at its astounding beauty with what ever that remained standing, allowed us to envision what it must have been like it its heyday.

In days of past glory…

Aphrodisias was laid out on a grid plan in the second or first century B.C. and came under the personal protection of the Roman Emperor Augustus together with a long period of growth.The initial building program sponsored by a famous local citizen called Zoilos, focused on the Temple of Aphrodite, the North Agora, and the Theatre.  Aphrodisias, a cult centre of the Goddess Aphrodite was also an important art and cultural centre, including a flourishing school of sculpture since the city was located next to several marble quarries.

The Temple of Aphrodite formed the centre and the nucleus of the city. A second public square (the South Agora),the Sebasteion (sanctuary of the emperors), and numerous public buildings like baths, a Bouleuterion (Council House) and a monumental gateway were part of the city’s expansion in the early to mid first century A.D.

There was little new construction at Aphrodisias between the third and sixth centuries A.D. , but the buildings of the city-center were kept in constant use and good repair. The main architectural project of the late Roman period was the transformation of the temple of Aphrodite into a Christian Church in about A.D. 500.

Aphrodisias remained a thriving city from the second century B.C. to the seventh century A.D. and it charts the major historical developments of this long period in great detail – such as the establishment of the Roman Empire, and the conversion of the Roman world to Christianity. Since Aphrodisias was positioned in an earthquake zone and suffered a great deal of damage at various times, the massive earthquake that occurred in the 7th century A.D. brought the city into disrepair and abandonment.

Much of the time-line and historical details of this amazing ancient metropolis can be found in the Aphrodisias Museum that houses prehistoric artifacts dating back to 5000 B.C. and hundreds of marble sculptures excavated from the ruins since the museum’s opening in 1979.

I felt a little saddened that such a magnificent city had met such a fate. But was quickly reminded by the saying “for all things must come to pass”. Maybe somewhere, in a parallel universe, the city of Aphrodisias is still striving in all its glory with a grand basilica as its nucleus.

Have you been to Aphrodisias? What was your experience like? 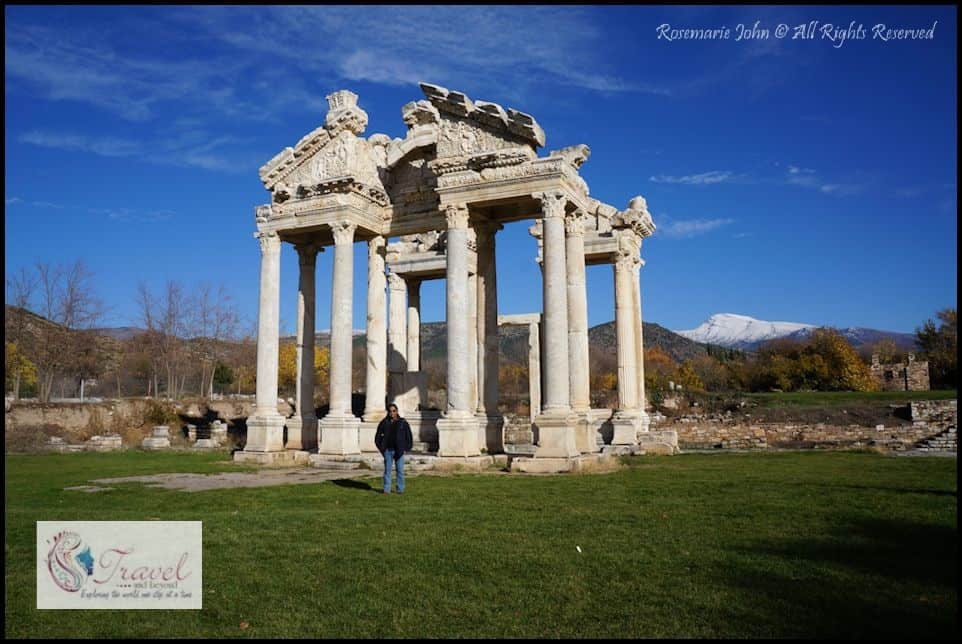 Joseph at the Monumental Gateway

Upon arrival to the ruins you will be greeted by the renovated Tetrapylon, a gateway of Corinthian style columns decorated with reliefs of the god Eros and goddess Nike. 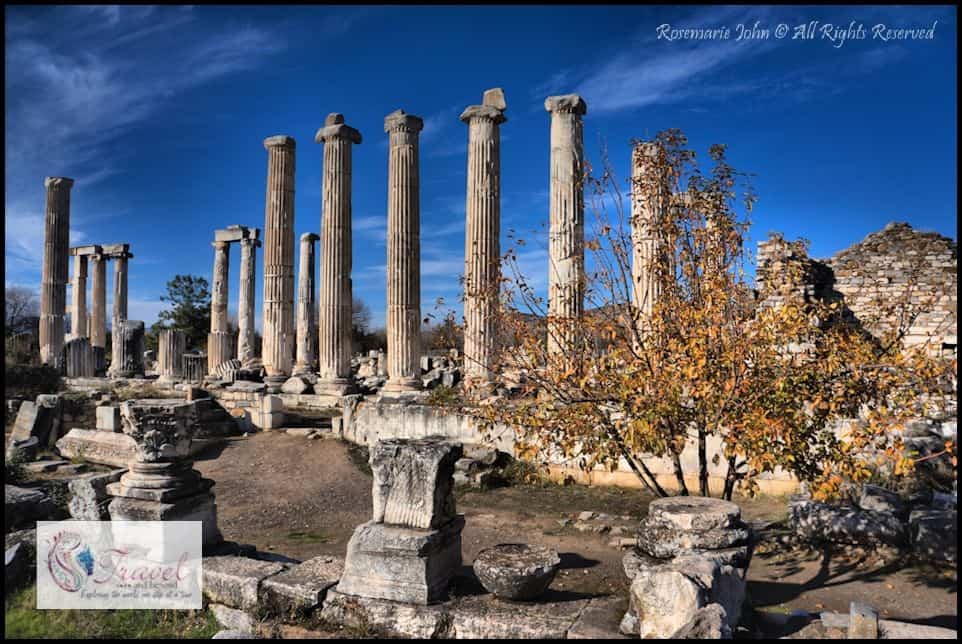 The Temple of Aphrodite was a focal point of the town. Originally over forty columns of the temple would have stood, a number of which have been realigned today, giving a great sense of the scale of the original building. The Temple was converted into a Basilica in the 5th century AD with the Roman conversion to Christianity. 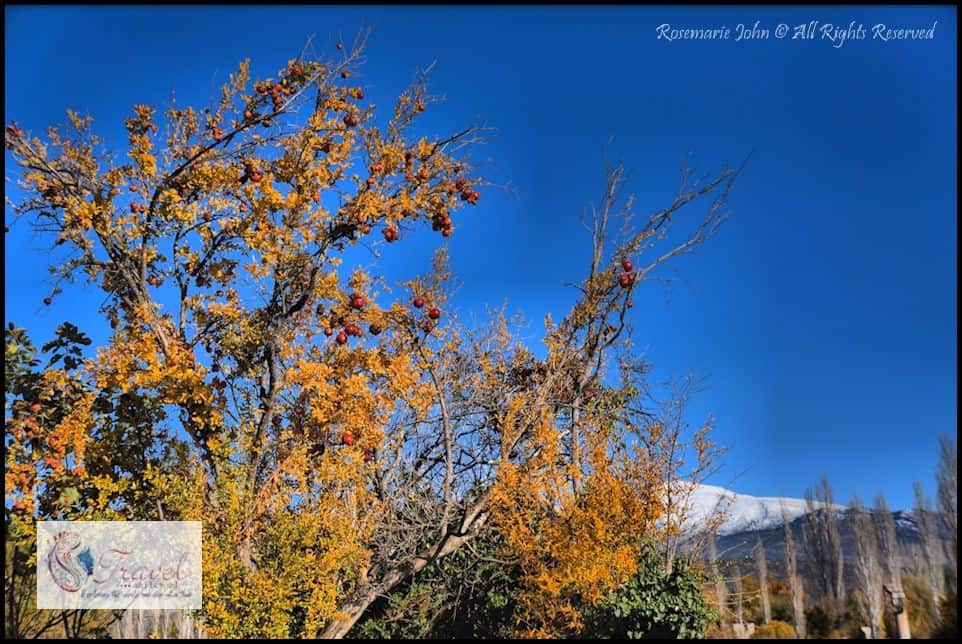 You will find Pomegranate trees everywhere you turn! 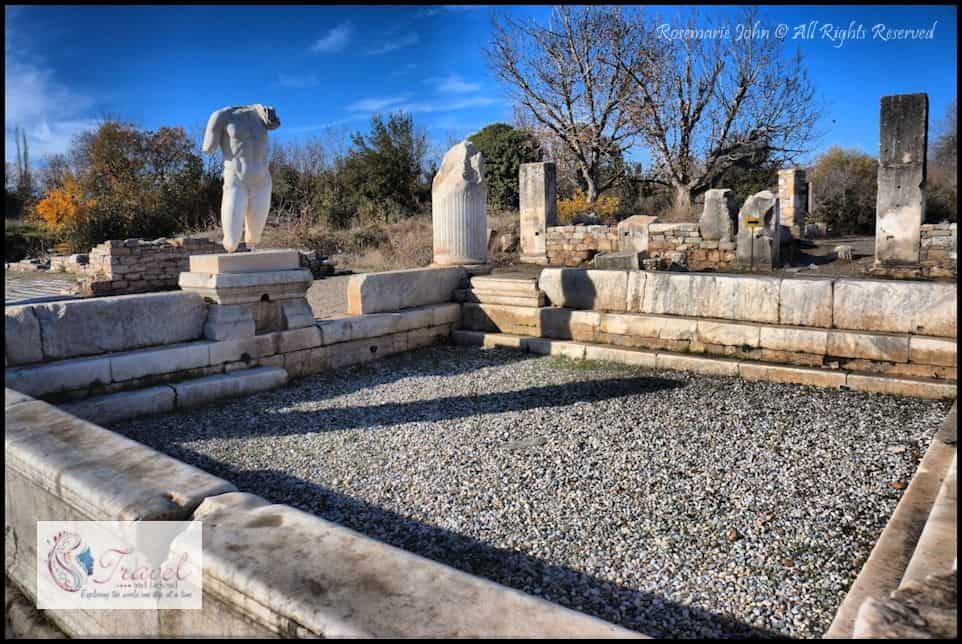 The great imperial bath buildings of Rome were wonders of vaulted construction and water technology. They were bathing, exercising and relaxation. The buildings were highly decorated with coloured marbles, mosaics and statuary. Wood-furnaces sent hot air around the air channels (hypocausts) set beneath the floors and in pipes in the walls. The technology of Roman baths were passed to the Arabs and in turn to the Turkish Hamam of today. 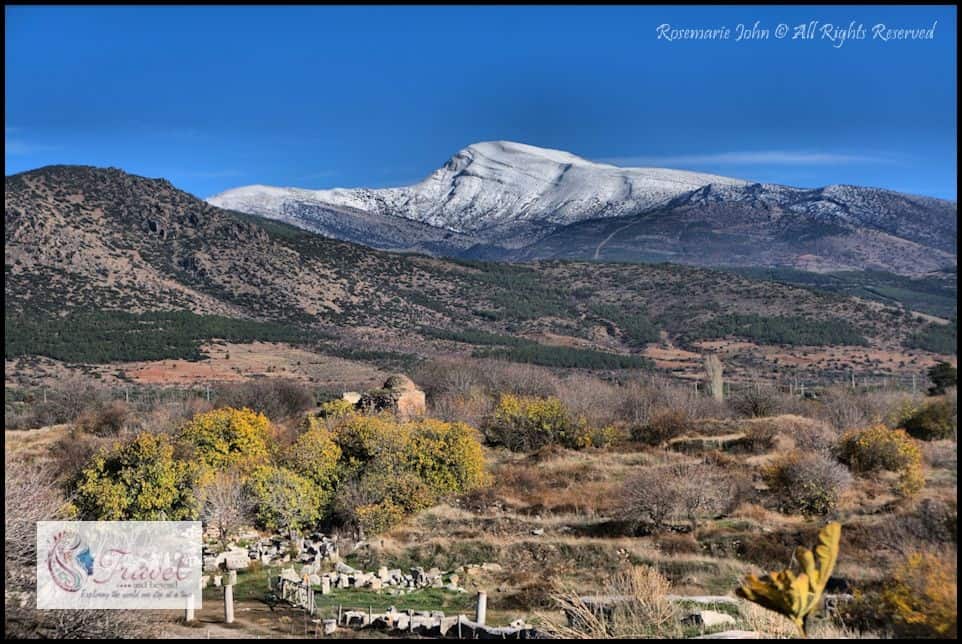 Aphrodisias is situated at the base of the Babadag mountain range, at 500 m above sea level. The city was the capital of the ancient Roman province of Caria. 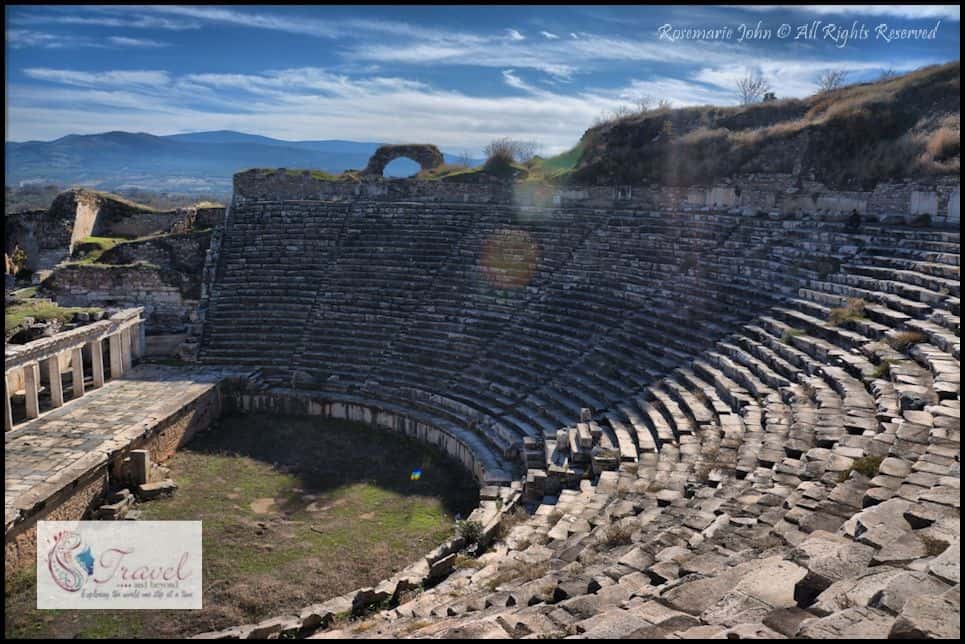 The 8,000-seater ancient theatre which was adapted for gladiatorial combat in the Roman period. It had amazing acoustic features that allowed the audience at the most highest seats to hear crystal clear dialogues. I was made to sing (to test the acoustics) at this ancient theatre by my entire tour group since it was my birthday! 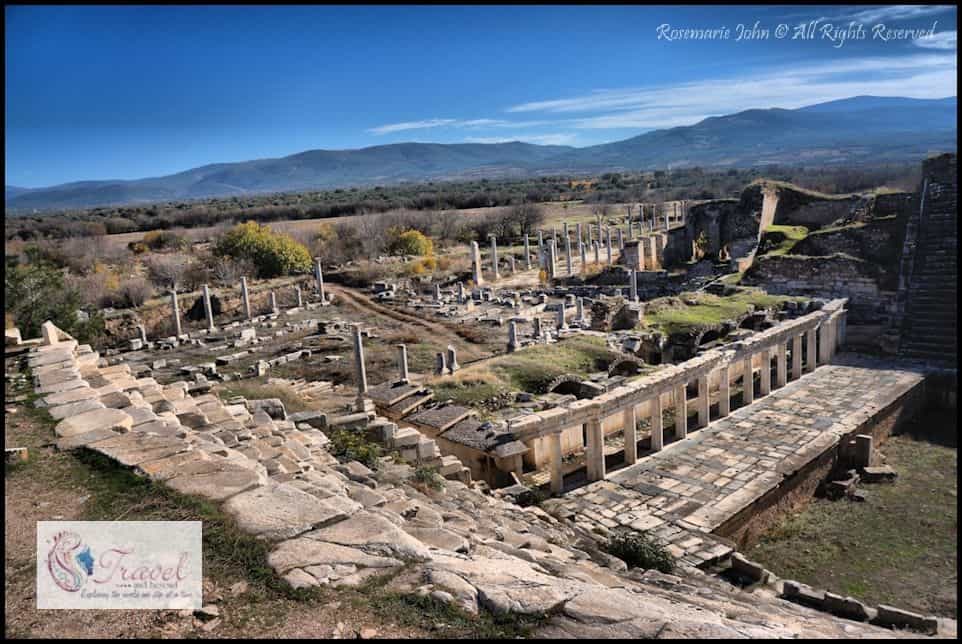 A second bath complex located behind the theatre 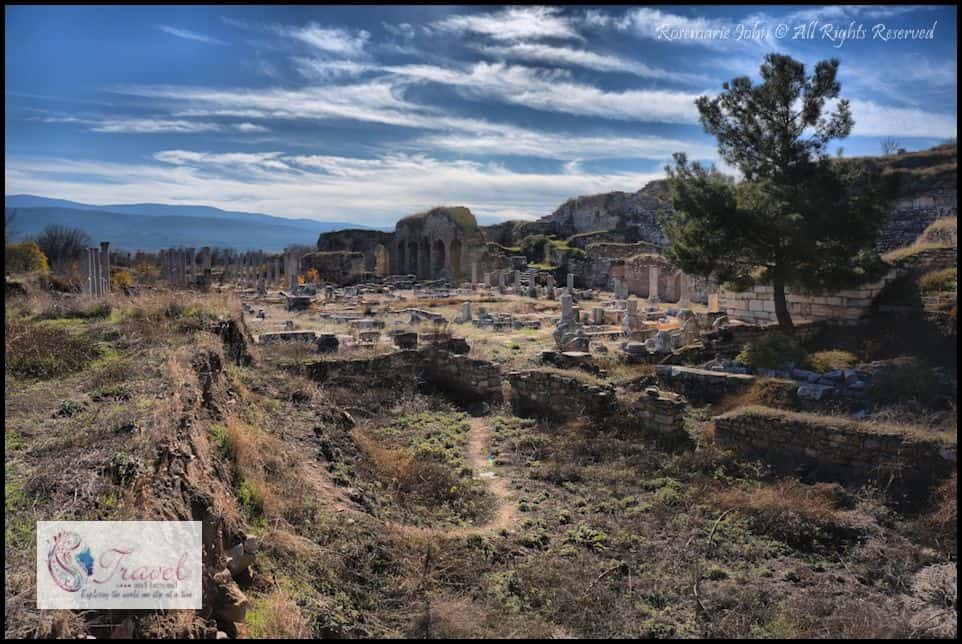 The city is so large, you’ll find ruins everywhere! 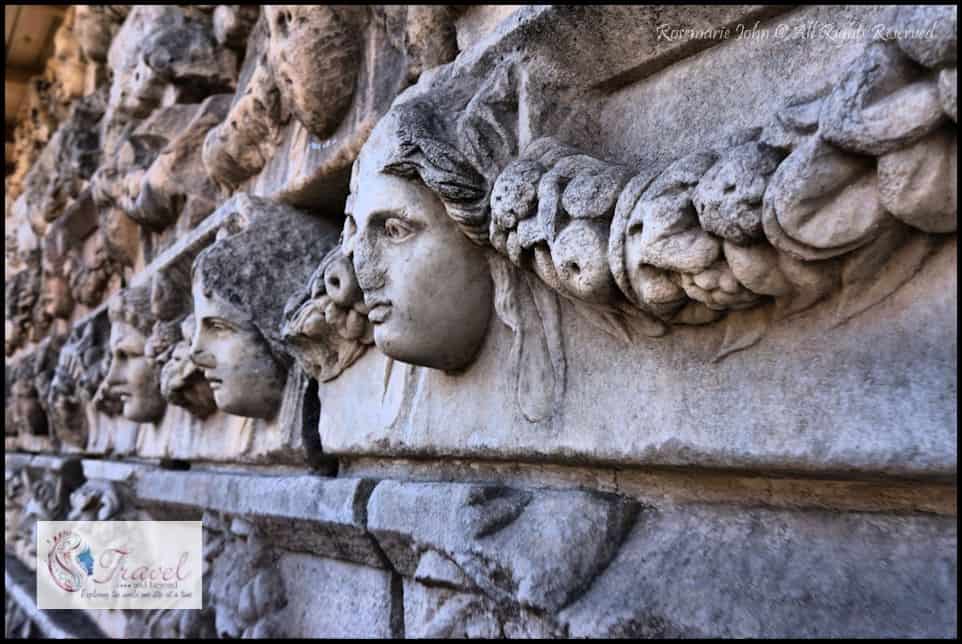 A wall of Agora frieze blocks at Aphrodisias 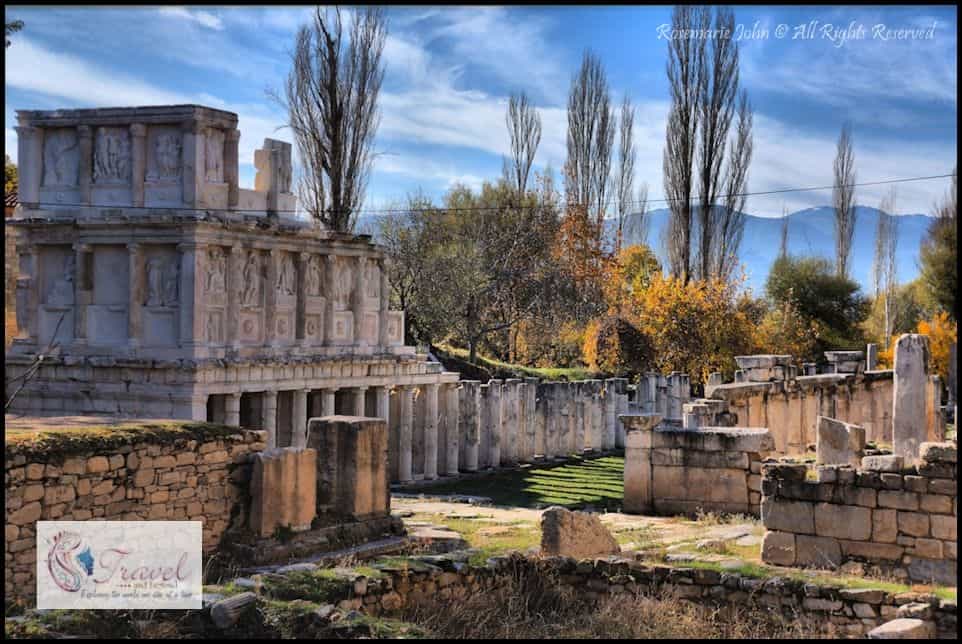 The Sebasteion, a religious sanctuary dedicated to Aphrodite and the Roman emperors, is one of the most remarkable discoveries of Roman archaeology. It is one of the best-preserved examples of a Roman imperial cult complex, and is decorated with an extraordinary series of life-size marble reliefs (originally almost 200), which depict Roman emperors and imperial family members from ca. A.D. 20 to 60, as well as, personifications of the subject peoples of the Roman empire, and mythological heroes and gods. The reliefs provide an unparalleled insight into how Roman imperial power was understood from a local perspective.