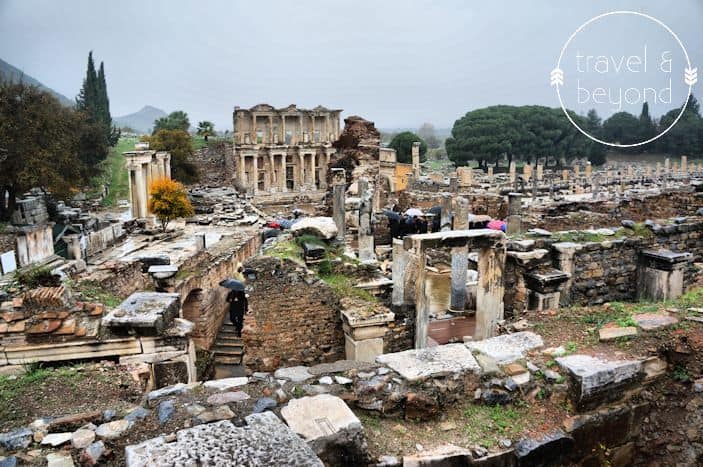 Ephesus has always been on top of our list of “must see places”. As one of the seven churches of Asia cited in the Book of Revelation, this ancient city holds a special fascination in our hearts. We just had to see it and walk its marble streets for ourselves. Reading about it and watching it on TV wasn’t enough. Located near a town called Selcuk in the Turkish coastal city of Izmir, Ephesus dates back to the classical Greek era 6000 BC.

Just as we arrived, the heavens opened and it started to pour cats and dogs. It was almost impossible to photograph the beauty of this historical city without damaging our cameras. The heavy rains however didn’t stop us from exploring and navigating our way through the ancient remains and slippery marble floors. The very fact that we were walking through the pages of history was both fascinating and overwhelming. And as the icy sheets of rain and strong gusts of winds thrashed against us we entered the ancient city with trepidation and wonder.

After the Lydian rule, Persian invasion, Alexander the Great’s victory and the Hellenistic period, the Romans, Byzantine and finally Turks took control of Ephesus making the city a melting pot of culture and religion.It was a major trade hub with a growing economy and since Christianity was introduced to Ephesus from the 1st century AD by Paul the Apostle, it eventually became a religious centre for early Christians.

It is believed that during his stay in Ephesus, Paul wrote four letters to the church in Corinth admonishing them for their pagan behaviour. It is also the ancient city where John the Apostle remained for the rest of his life (except for the short exile to the isle of Patmos) after leaving Jerusalem. St. John died in Ephesus and is buried 3.5km away on the slope of Ayasoluk Hill. Emperor Justinian erected a basilica above his tomb in the 6th century AD.

As we meandered our way through the paths of old, we discovered many symbols, concepts and inventions of the Greeks and Romans that we still use today. During the Byzantine era, the city was rebuilt by Constantine I, but eventually destroyed by an earthquake in 614 AD and abandoned during the 15th century as the city’s importance as a commercial centre declined when the harbour slowly silted up by the Cayster River.

What remains of the city are some rather well preserved ruins that highlight the past grandeur of Ephesus. There is still a lot of excavating going on and according to our guide, we were currently witnessing only a third of the original city and a great deal of excavation is still in progress. So as time goes on more of this fabulous city of the ancients will be unravelled. But while walking through its many lanes and by-lanes one can almost visualize what life would have been like here. We could not help but think that almost 2000 years ago the early apostles actually walked and spoke on these very streets that we were now walking on.

Our walk in near blinding rain from the entrance to the exit took about 40 minutes. We could not take detours due to the downpour. If it had not rained, we reckon we would have spent a good two or three hours exploring the site. What we saw has only fuelled our hunger to see more of this historic city. Someday we hope to go back again but if we can’t, our visit to Ephesus will stay in our hearts forever! 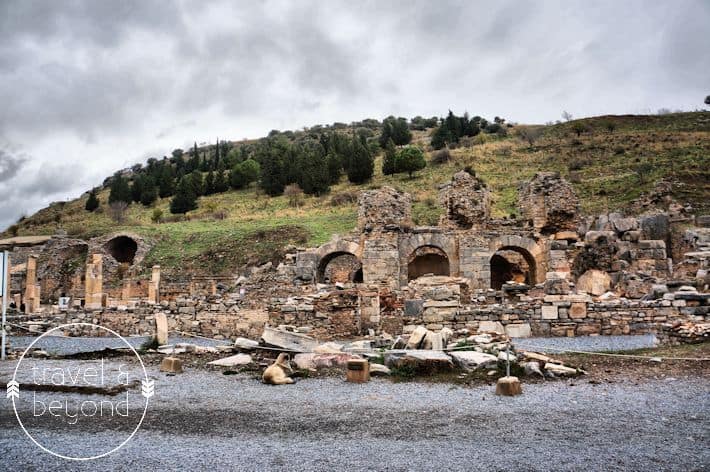 The government agora. Here lies a two storey building (stoa) built around 11 AD by C. Sextilius and family. It collapsed during the reign of Augustus and was not re-built again. 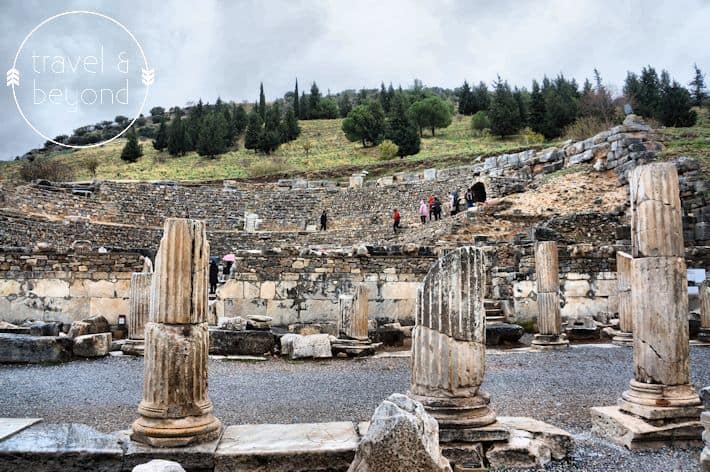 The Odean (Bouleuterion). It was used both for senate meetings and as a concert hall. Constructed in 2nd century AD by order of Publius Vedius Antonius and his wife Flavia Paiana. It had a capacity of 1500 spectators. 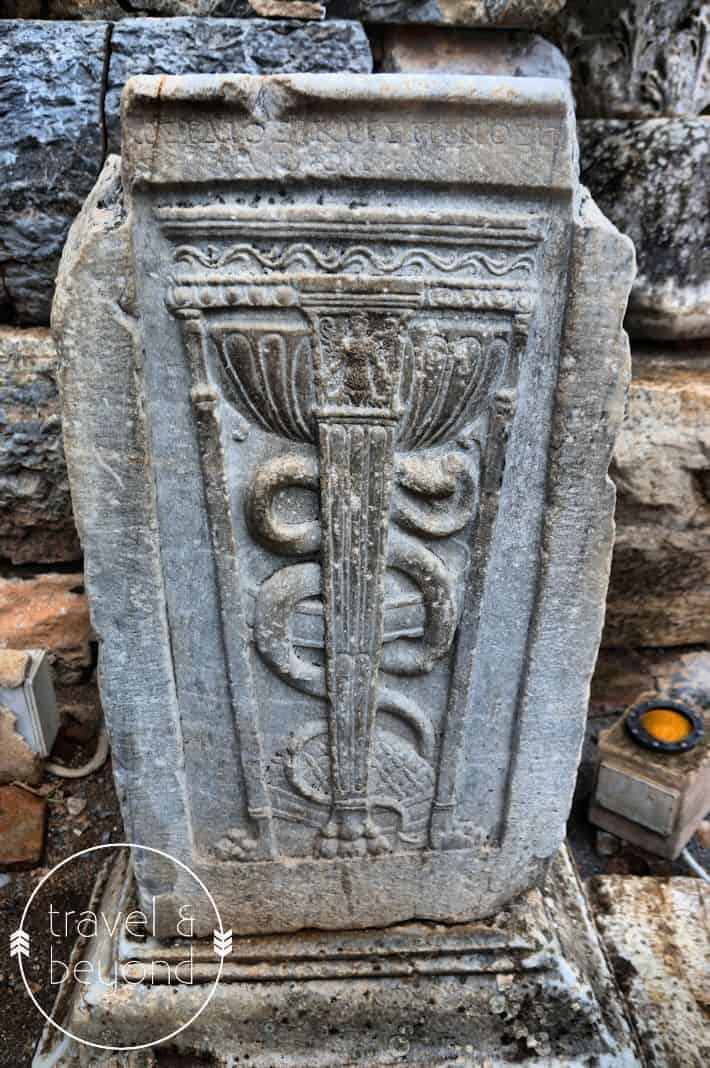 Ephesus was home to a large medical school. This symbol is a serpent-entwined rod wielded by the Greek god Asclepius, a deity associated with healing and medicine. The symbol has continued to be used in modern times, where it is associated with medicine and health care. 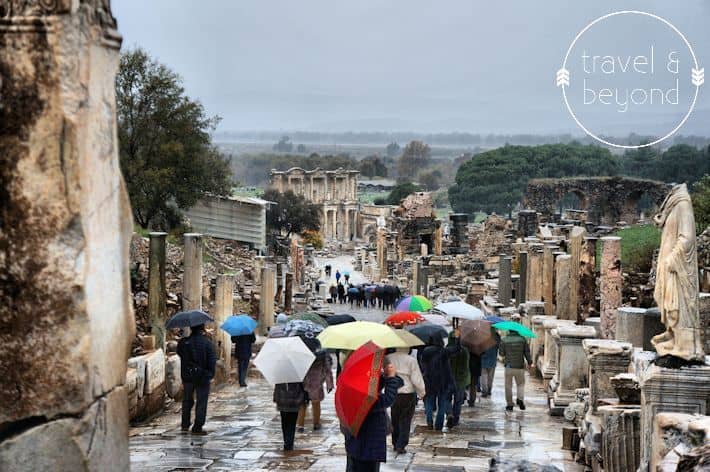 Curetes Street. Named after the Curetes (a priests who took care of the flame of Prytaneion). Curetes Street connected the Gate of Hercules with the Library of Celsus. The street was made of marble and had been decorated with columns on both sides as well as several sculptures including reliefs of the messenger gods Hermes, the hero Heracles and the goddess of the victory, Nike. 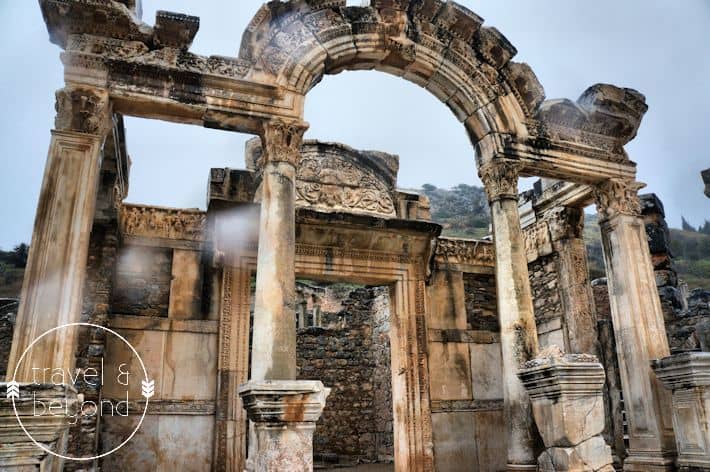 The Temple of Hadrian was built in around 138 AD by P. Quintilius and dedicated to Emperor Hadrian who came to visit the city in 128 AD. 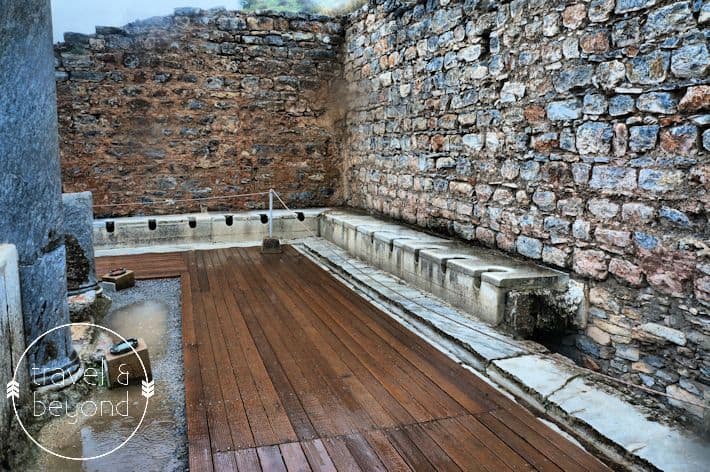 The Latrines were the public toilets of the city and there was an entrance fee to use them. There was a drainage system under the toilets. 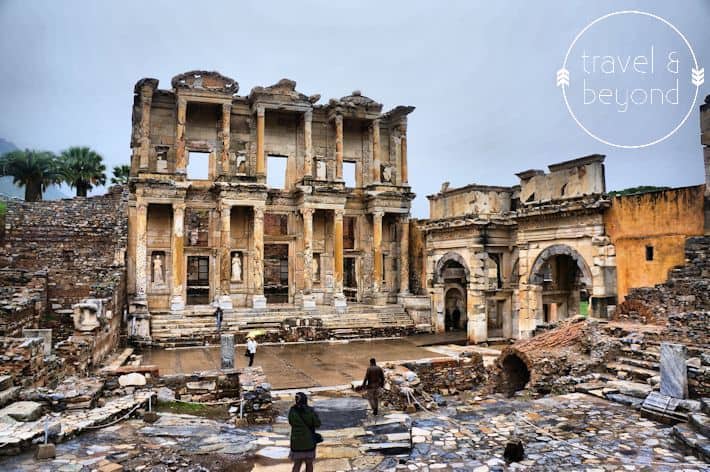 The most beautiful structure – The Library of Celsus. Built in 117 AD, it was a monumental tomb for Gaius Julius Celsus Polemaeanus, the governor of the province of Asia. The grave of Celsus was beneath the ground floor, across the entrance and there was a statue of Athena, the goddess of wisdom over it. The scrolls and manuscripts were kept in cupboards in niches on the walls. There were double walls behind the bookcases to prevent them from the extreme temperatures and humidity. The library held more than 12,000 scrolls and was the third richest library in ancient times after Alexandra and Pergamum. 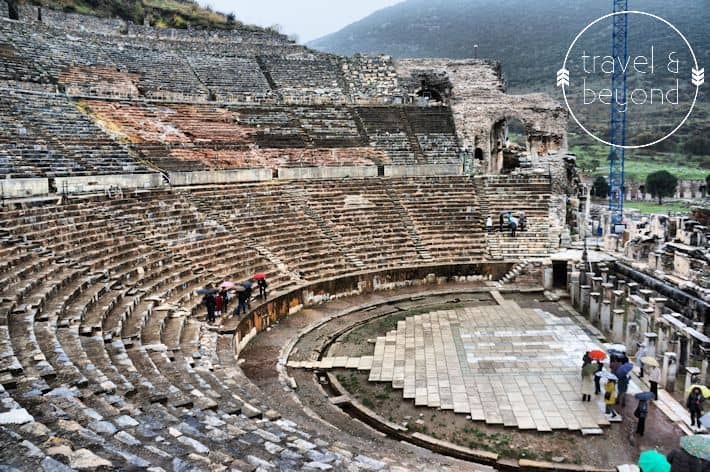 The Great Theatre is located on the slope of Panayir Hill, opposite Harbour Street. It was first constructed in the Hellenistic Period, in the third century BC during the reign of Lysimachos, but then during the Roman Period, it was enlarged and formed its current style that is seen today. It is the largest in Anatolia and has the capacity of 25,000 seats.