Cycling through a Rustic Fishing Village in East Coast Malaysia 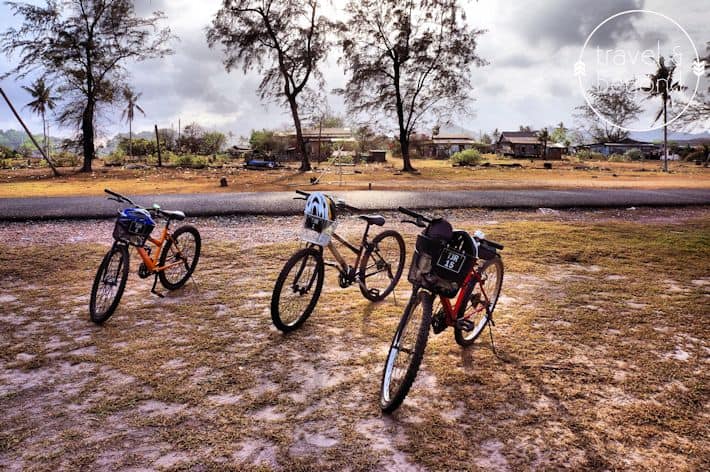 The sun was shining through the leafy branches and the coastal wind was blowing in my face as we peddled along the main road. It has been more than seven years since I had ridden an actual bicycle. Gym cycles don’t really count. We soon realized that now balancing came into play and the fear of falling down was quite real.

However, a few wobbly moments later and several pedal strokes down the main road from Tanjong Jara Resort, we turned into a narrow coastal road that stretched right up to the light house on top of the hill and I found myself joyously enjoying riding a bicycle again. 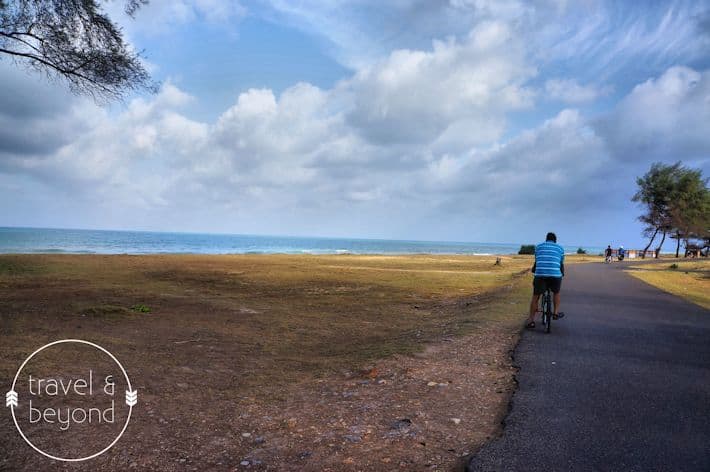 As I rekindled my fond childhood memories of cycling around my neighbourhood, I couldn’t help but notice the peaceful and simple surroundings that made the district so different from the usual city life I am used too. Weaving through Dungun’s fishing village and discovering the area that surrounds Tanjong Jara was such a fantastic way to experience the authentic Malay way of life.

Our destination, the tip of a fishing village called Seberang Pintasan that opened out to sea. We didn’t just cycle non-stop all the way there though. We took several short breaks along the way to photograph the beautiful shore and listen to the commentary of the resort’s Naturalist, Capt. Mokhtar Mohamad who led the cycle tour.

A man of many talents, Capt. Mokh was full of tales that kept us entertained during the entire journey. Though born in Penang, his knowledge of Terengganu and fascinating stories kept us wanting for more.

Captain Mokh informing us about the tide

It was somewhere in one of these story telling stops that I realized I was the only one in the cycling group who had worn a helmet! No wonder every native that passed us by kept giving me a second look! Embarrassed and feeling out of place I soon discarded the helmet and the cool breeze was comforting against my steaming scalp. It is definitely much safer to use a helmet but since we were cycling in a small sleepy town and that too at a snail’s pace, I figured I didn’t need it.

Enroute we passed a capsized Thai fishing trawler that had washed ashore. The damaged bright orange deck somehow reminds you of the true tumultuous character of the South China Sea. Mess with me at your own peril… the sea seemed to say with its deep baritone voice.

The main livelihood of the people living in Tanjong Jara and Seberang Pintasan is fishing. Hundreds of fishing boats and trawlers dot the horizon. A typical day in the village would be men toiling at sea; women busy cleaning, chopping fish or carting away the catch and children and young men fishing from bridges. The breeze from the sea brings in with it the scent of fresh catch in the air.

My hamstrings screamed as we peddled uphill and entered the heart of the village where wooden houses on stilts sit on either side of the gravel road. There were chickens crossing the road literally and cows grazing on either side. The air was fresh and the villagers waved and smiled as we rode by.

I have to admit, there were moments where I got down and pushed the cycle as the hill was just too steep. Feeling ashamed at my fitness levels I sheepishly turned around and soon realized that everybody else behind me had already done the same! That made us all burst out in laughter cause the only one peddling away as if it was no great feat was Capt. Mokh who was some 35 years older than all of us!

Dusk was fast approaching and the sun was beginning to set as we reached the end of Kampung Seberang Pintasan. Meaning village in the Malay language, the word Kampung or Kampong refers to a Malay hamlet of less than 10,000 people. The local fishermen had already returned from sea and their boats floated in unison with the waves of the South China Sea. 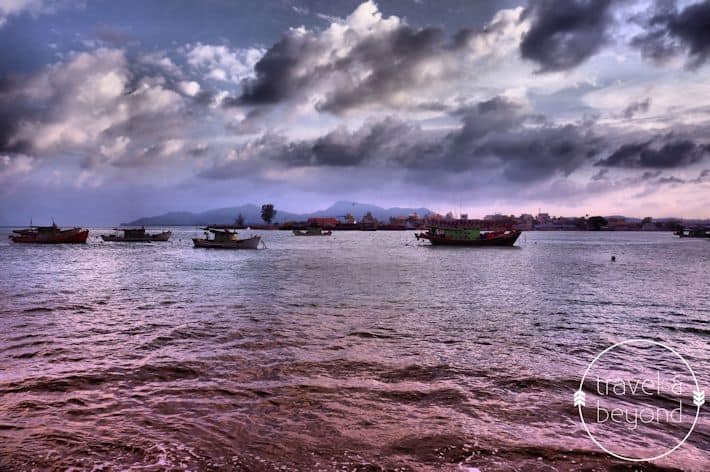 Fishing boats at their moorings

“You see those alphabets on various boats?” asked Capt. Mokh. “A, B and C define what each fishing boat is allowed to do”, he added. It was really interesting to learn the economics of fishing, their rules and regulations and how price is controlled by the Fisheries Department Authority of Malaysia. He went on to describe each alphabet displayed on the boats and trawlers…

“A” Boats – Cannot fish more than 5 nautical miles out. Termed as coastal fishing without nets, they use a trap called a Bubu. Their usual catch is crabs, lobster and small fishes.

“B” Boats – Fish between 5 to 12 nautical miles. They are allowed to use nets which are cast manually at a depth not more than 5 meters deep.

“C” Trawlers – Deep Sea fishing from 12 to 30 nautical miles and until and not beyond the coastal state of Terengganu’s Exclusive Economic Zone (EEZ). Trawlers are larger boats with more crew members and are equipped with radars and sonar equipment. Trawlers are fishing nets that are pulled along the bottom of the sea or in mid-water at a specified depth.  Though “C” trawlers catch many types of fish, they are only allowed to sell their catch based on the permit they hold. If it’s a tuna permit, then they can only bring Tuna back. Not to lose out, they conduct an open sea sale from trawler C to boat A and B based on what boat A and B can bring back to shore.

Once back on shore, the price of fish and shellfish are set by the Fisheries Department Authority of Malaysia.

After an enlightening brief about fishing, we were treated to a cup of locally brewed Terengganu coffee and freshly made roti canai served with the best tasting tuna curry I have ever had! We chatted for a while and then it was back on the cycle to head back to the resort.

As we turned back, I rode in silence. My legs were screaming for mercy but my head seemed to be clear and thoughts refreshed. The village folk were returning home. Some waiving back, some smiling warmly. They don’t see too many foreigners in these parts. Perhaps that is why this place is such an exotic mystery. It has an unexplored beauty about it. I see the lights of Tanjong Jara Resort a small distance away as I pedal towards it.  What a sanctuary I muse to myself as I pedal harder towards it.

Been on a cycling tour of a village before? Share with us your experience in the comments below. 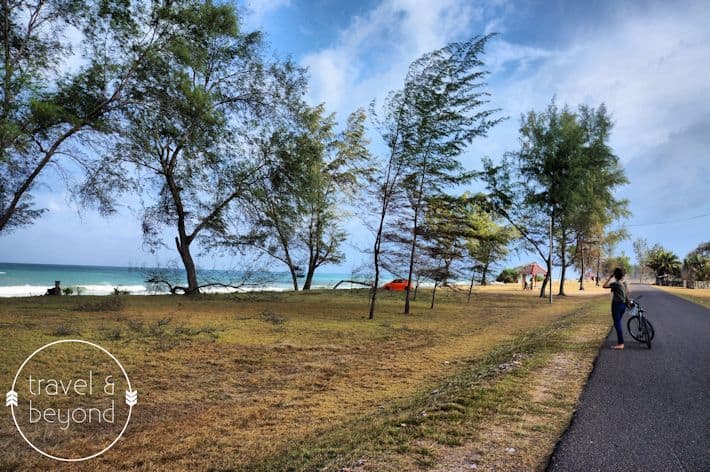 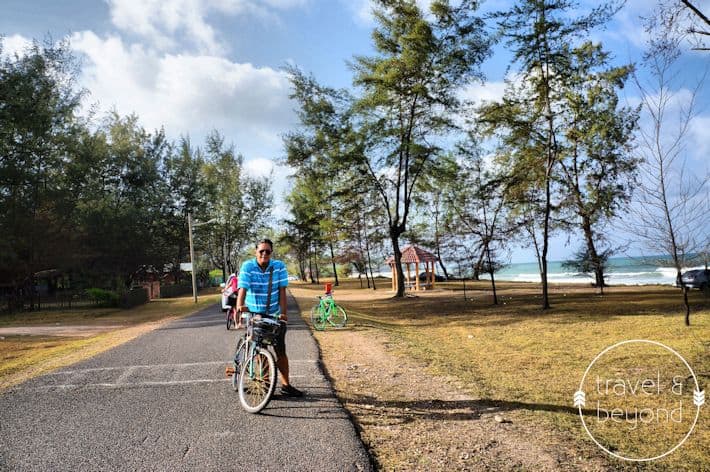 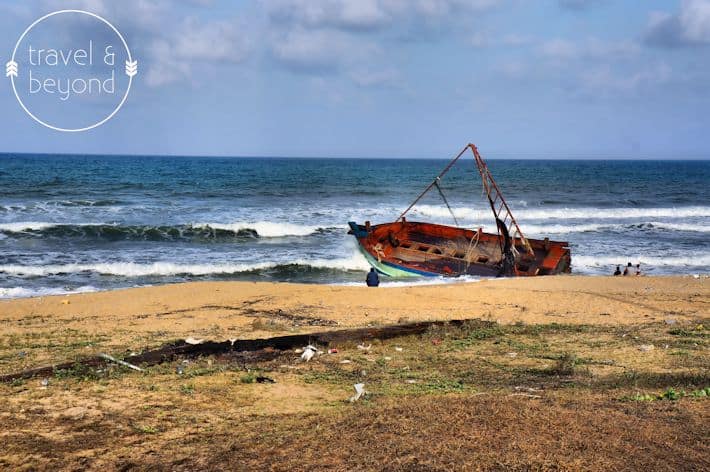 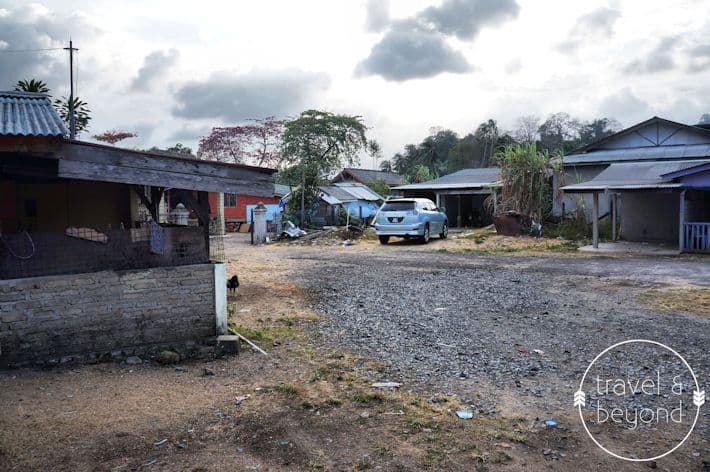 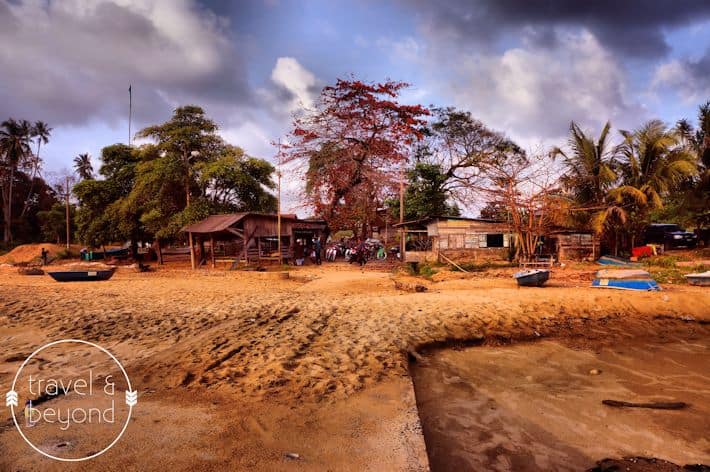 At the end of Kampung Seberang Pintasan 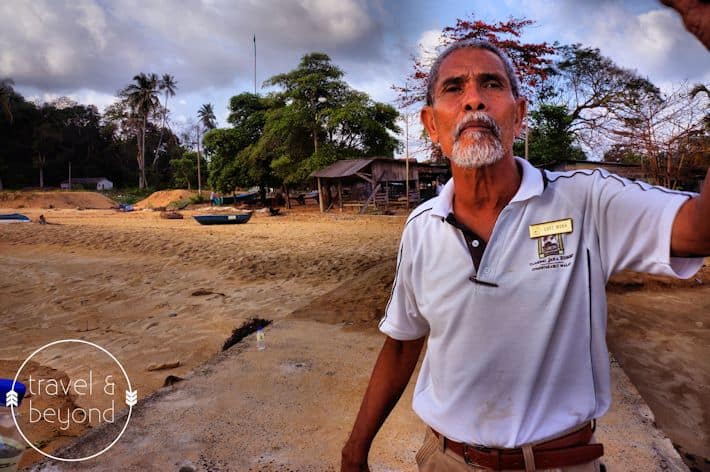 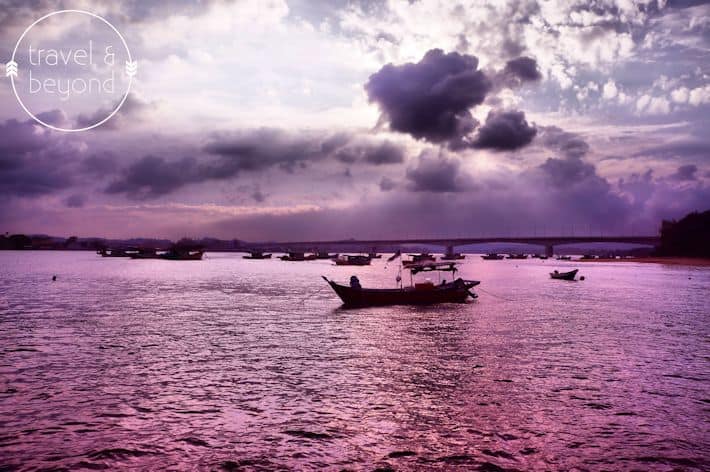 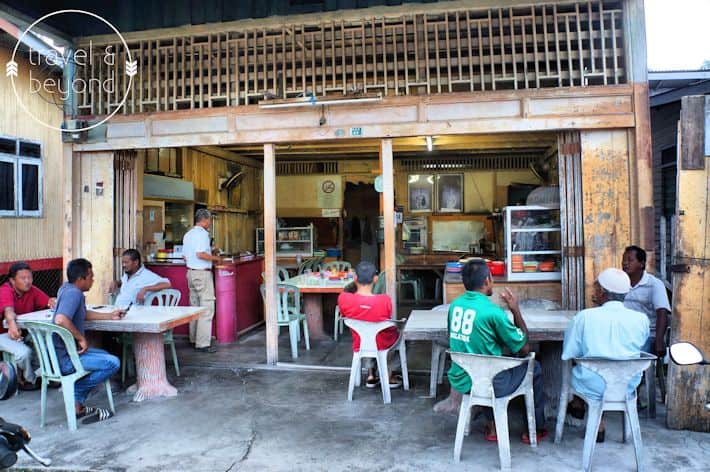 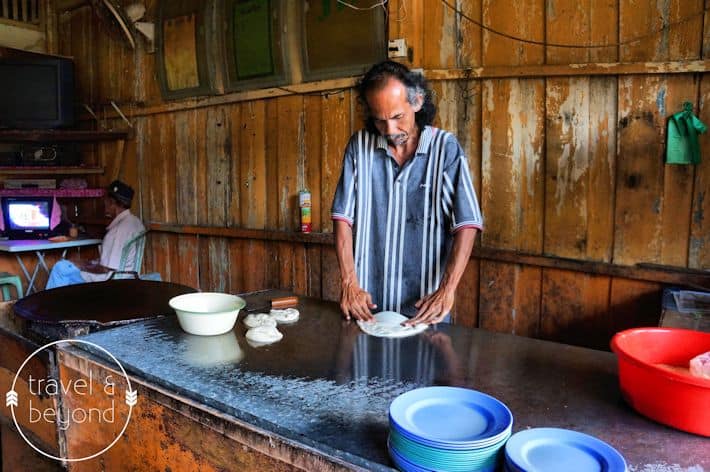 A rustic coffee shop that makes a mean roti canai! A must try!

Roti canai being made fresh at the village coffee shop 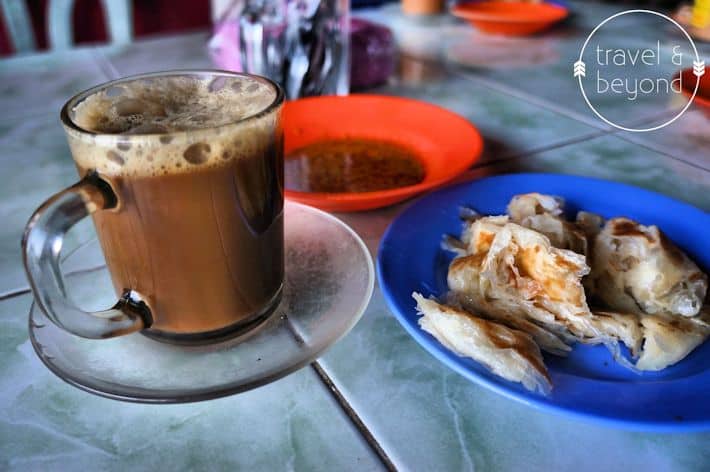 The curry served with the roti canai was our of this world! I would love to return just to have it again! 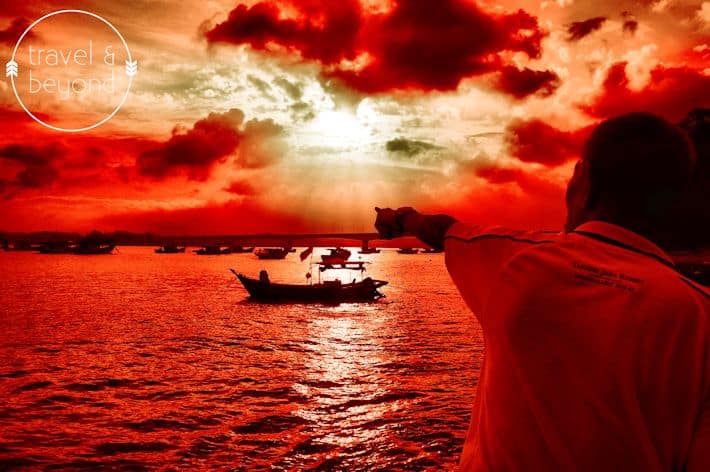 Capt. Mokh doing what he does best…

Tanjong Jara Resort is located at Batu 8, Off Jalan Dungun 23000 Dungun, Terengganu, Malaysia. The Bicycle Tour departs every Monday, Wednesday and Friday from the lobby at 5pm. Cost: Approximately US$15 per person and includes bicycle and guide. Duration: approximately 2 hours. For more details on the other daily activities conducted by the resort, visit their official website.