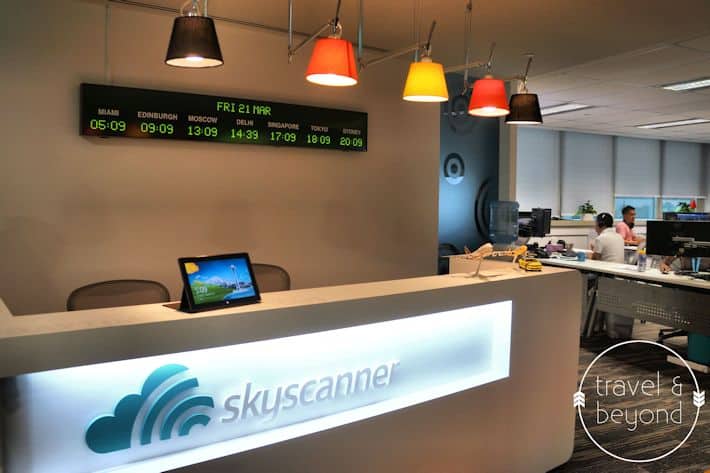 The first quarter of 2014 has been a great year for our blog. We not only won the Skyscanner Singapore’s Best Travel Blog of the Year Award but also bagged the Skyscanner Asia Pacific’s Best Travel Blog of the Year Award as well. This has been made possible not just because of our travel stories and photos, but also because of our loyal readers who voted for us!

So a big fat thank you to all of you!! 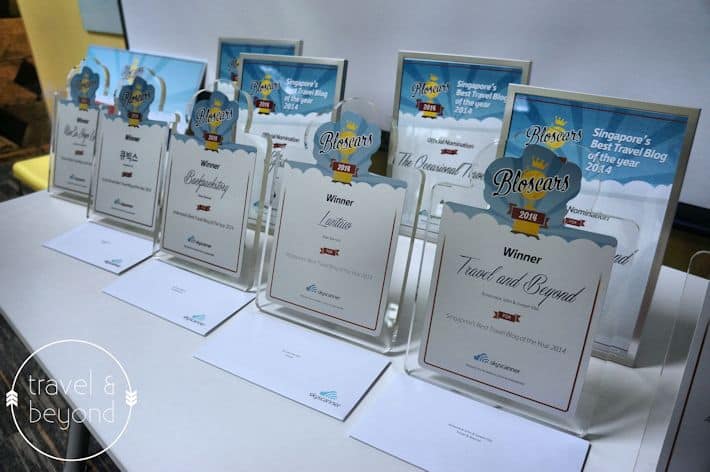 The Bloscars Travel Award 2014 is an award given by Skyscanner to travel blogs from selected countries in Europe and Asia. It recognizes the excellent work of travel bloggers in informing and inspiring travellers by sharing their adventures and first-hand experience.

The competition consisted of three stages: the nomination period, the voting and selection of the Best Travel Blogs from each participating country, and the selection of the international winner.

For Asia Pacific (APAC), the countries participating were Singapore, Australia, Indonesia, Thailand, Philippines and South Korea. The winners of each Asia Pacific country gathered in Singapore to attend the much awaited award ceremony at the Skyscanner office in Singapore. 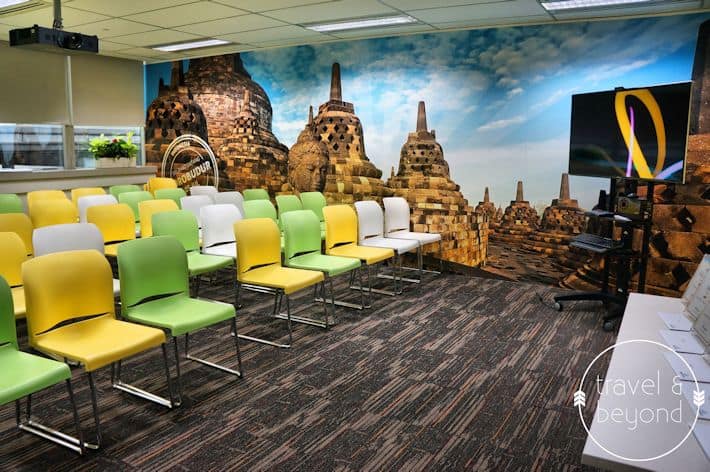 We gathered in the conference room and happily cheered winners of the country awards as each got up to receive their Bloscars plaque. We proudly accepted our award, which was for Singapore’s Best Travel Blog of the Year Award 2014.

To be nominated itself was an honour and to have won it among some really competitive and well known fellow bloggers from Singapore was like a dream come true. All the work that we put into providing our readers factual information, coupled with our emotions about places we visited had paid off. Winning the Skyscanner award was like a pat on our backs that said ‘well done.’ 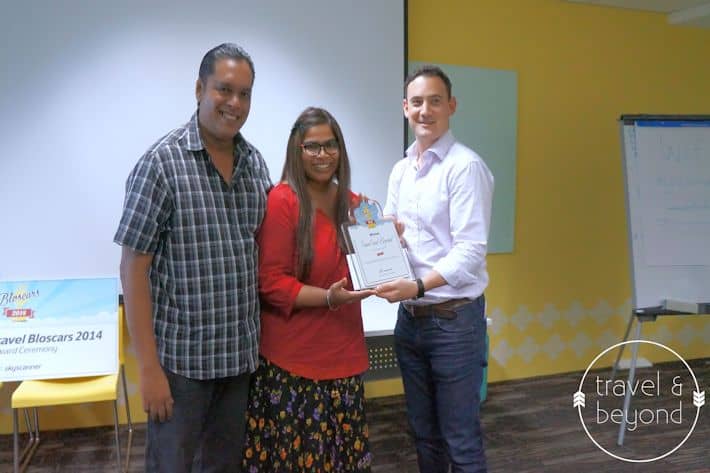 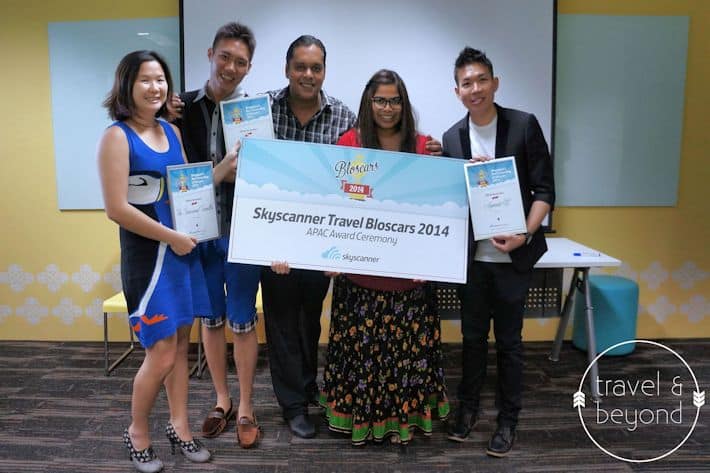 With fellow nominees, Jac of Occasional Traveller, Sy of Sylistic and AspirantSG 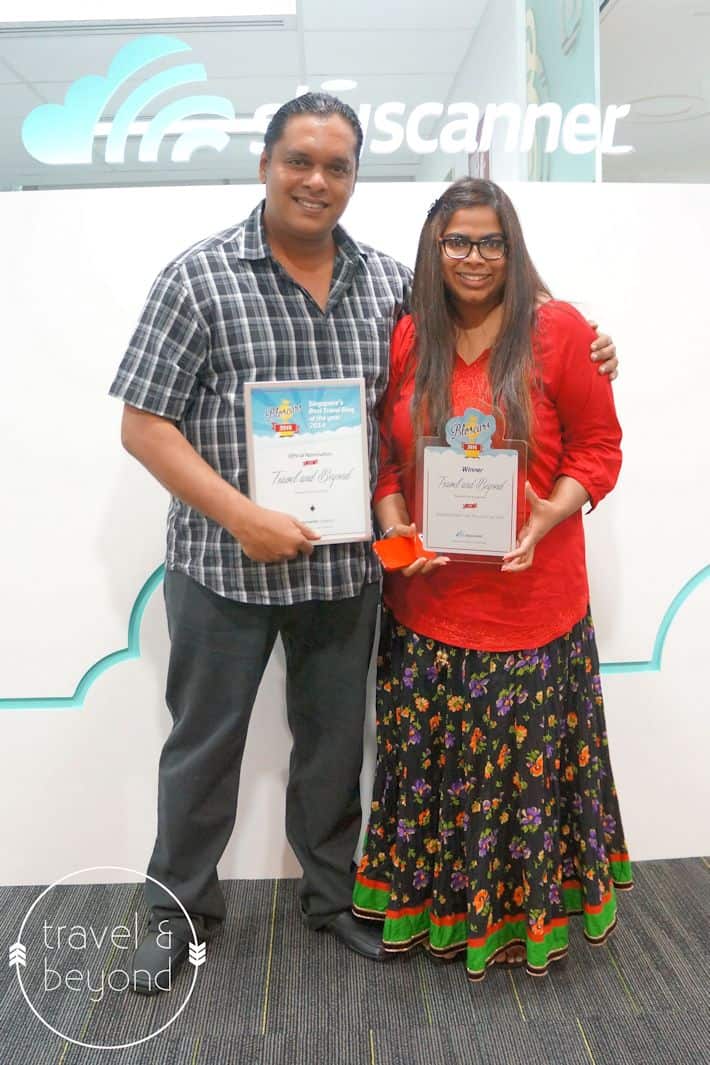 The obvious pose – with our award plaque 🙂

But unknown to all the participants was another award for the night – Skyscanner APAC’s Travel Blog of the Year Award 2014.

We were informed that a winner would be selected from the overall winners of 6 countries that fell in the APAC category. This was totally unexpected. We suddenly realized that by virtue of winning the country award for Singapore, we were now competing with the best from Australia, Thailand, South Korea, Indonesia and the Philippines!

Our competitors were Indonesia, Australia, Thailand, Philippines and South Korea. With thoughts of another competition in our minds we headed to dinner with the Skyscanner team and new found friends.

We gathered at a quiet little café called Group Therapy, which is tucked away on the 2nd floor of a restored shop house on Duxton Road, Singapore. After a light dinner and drinks and lighthearted banter among the winners and nominees the second award was announced.

We assure you that we never thought we would win it. To compete against 5 countries whose blog winners were acclaimed and established bloggers themselves, was in itself an honour.

“The winner for the Skyscanner APAC’s Travel Blog of the Year Award 2014 is Travel and Beyond!”

This announcement caught us unawares. We stared with our mouths open in astonishment. We couldn’t believe that we won a second award, more prestigious than any awards we had won so far!

Some in the crowd started hollering for a speech. We babbled something and went back to our seats completely surprised. We had an unintentional grin on our faces that had formed out of surprised happiness. 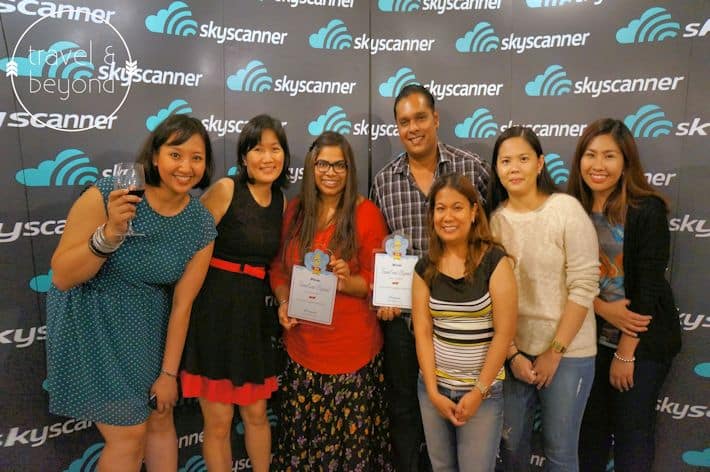 On the Skyscanner black carpet with our APAC’s Best Travel Blog of the Year Award in hand, posing with the Skyscanner crew – Tika, Ira, Janet, Leigh and Em!

We are truly happy that our efforts have been recognized. When we started our blog to write an electronic diary of our travels, it was meant to be a place for our family and friends to keep track about our lives because we lived so far away from all our loved ones. That humble effort seemed to have touched so many people around the world. And the support we got when we asked for votes for this award was overwhelming. Thank you sounds so simple and can never fully describe our gratefulness to all our readers. These awards by Skyscanner have not only filled us with pride but have also made us more responsible for what we write from now and in the future. Thank you one and all.

The birth of Skyscanner is an interesting story to tell about how it all began. One day a man got frustrated with the constant difficulty of finding cheap flight tickets. He decided to do something about it. He got hold of a couple of his IT friends and started Skyscanner with one Excel Sheet and one idea! The idea was to collect, collate and compare prices for every commercial flight in the world. That man was Gareth Williams and his two friends who shared his vision were Bonamy Grimes and Barry Smith. The year was 2001 and the place was Edinburgh, Scotland.

Today, Skyscanner is a leading global travel search site offering a truly comprehensive, free flight search service as well as instant online comparisons for hotels and car hire. Founded in 2003, Skyscanner receives over 25 million unique visitors each month. Skyscanner is optimised worldwide and is available in 30 languages. Skyscanner’s highly-rated free mobile apps are available on iPhone, iPad, Android, Windows Phone, BlackBerry and Windows 8 devices and have been downloaded over 25 million times. The privately-owned company employs over 300 staff and has its global headquarters in Edinburgh with regional hubs in Singapore, Beijing, Barcelona and Miami. For more information, visit their press office or company blog.