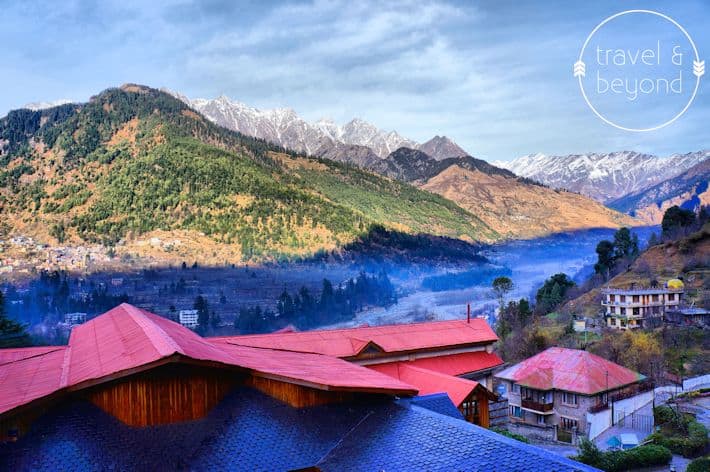 The sun was peeking through the curtains and as I pulled the drapes aside, the snow-capped mountains of the Pir Panjal range greeted me with all its glory. Arriving in the dead of the night after a long road trip from Shimla, did not prepare me for the beauty that unfolded in front of my sleepy eyes. My sleepy yawn turned into a jaw dropping gasp at the sight of the mountain grandeur rushing to greet me cheerfully.

The mammoth andesite rocky formations with its remarkably steep rise culminating in sharp ridges of snow and ice at the top of their crested peaks were breath-taking. Still reeling from the visual impact I woke Joseph up immediately, grabbed my camera and stepped out into the balcony. I didn’t care that the temperature was below zero degrees. I just had to capture the moment. A cold draft tickled my spine and kissed me with an icy breath while the mountains yonder looked at me with silent amusement.

This was by far my most favourite landscape scenery on our road trip through North India. I wasn’t impressed with Shimla and I hated the pollution and crowds of Delhi so Manali was a much needed change. It appeared to me that India sensed my dislike of its cities and decided to start showing me a glimpse of her raw beauty.

We arrived at the start of winter so snow fall was visible only on the mountain tops. We met a few adventure tourists who were there for trekking, paragliding or skiing and honeymooning couples seeking a romantic getaway.

We on the other hand were there to drive up the world’s highest motorable road called the Rohtang Pass (details in our next post). So here we were, a motley bunch of people gathered, each with their own journey to undertake and Manali welcomed us all. A new sense of peace and calmness descended upon me. It’s a feeling I cannot describe with words or even pictures.

Soon an ugly blot on this pristine landscape made its appearance and as usual, it had to be man-made. Along the Solang Valley where paragliding facilities are available, the equipment was in appalling condition. Tired and unfed horses carrying tourists trudged along panting. The poor animals looked miserable and tortured.

Touts, the bane of all tourist activity anywhere in the world swarmed around us like flies. Corrupt security officials manning the area for God knows what reason rudely demand entry fees too look at landscape! No receipt is given, the money is coolly pocketed. I don’t think this fee was officially sanctioned by the local tourism board. Our driver mentioned that there were some temples but we lost interest in every place that is man-made and concentrated in soaking in the natural beauty around us.

The local cuisine was absolutely delicious. There is nothing to shop around here so don’t even bother to add shopping as a necessary getaway. Believe me I tried to look around but wasted time looking at stuff that was absolutely uninteresting while warding of touting flies that follow you everywhere.

We had to wait a day until a Himachal Pradesh registered vehicle would be at our disposal for our journey up to Rohtang Pass. Interestingly Rohtang literally means, “pile of corpses” – a name that stems from the deadly mudslides that often cover the 4,000m-high road in the eastern Himalayas. It is known for its unpredictable weather, including snowstorms and sudden avalanches. The roads leading up are narrow and one wrong turn will take the rider down to oblivion! Now doesn’t that sound thrilling!

SNEAK PEAK: What our drive up to Rohtang Pass looked like!

But let’s leave the adventure up the path that accumulates a pile of corpses for tomorrow. Today we still have to walk around Manali. We were told of a place called the Manali Mall. No my dear, it’s not a shopping complex. In this part of the world it appears every small bazaar is called a mall. It was an uneventful experience and a total waste of time.

We tried visiting a temple named Vashist Mandir which has a hot spring flowing beneath it. The mass of humanity there discouraged us to go any further. We ate some Punjabi food which tasted better than any Punjabi food we ate in Punjab. On the drive back we recollect seeing a Buddhist monastery which was the only colourful spectacle against a grey and white landscape.

As evening crept upon us, we discussed excitedly about the adventure we would have tomorrow. I looked out of the window; the setting sun seemed to have converted the peaks into mountains of silver. I watched it for a while until darkness shrouded the land. I went looking for Joseph and found him drinking his coffee in the balcony. Smiling to myself I snuck into bed and was soon fast asleep. 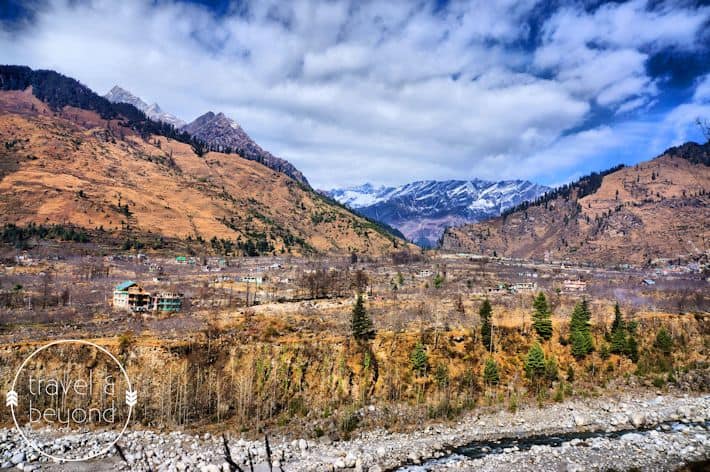 Just 40 kms away from Kullu to the north, Manali is situated near the end of the valley on the National Highway leading to Leh. 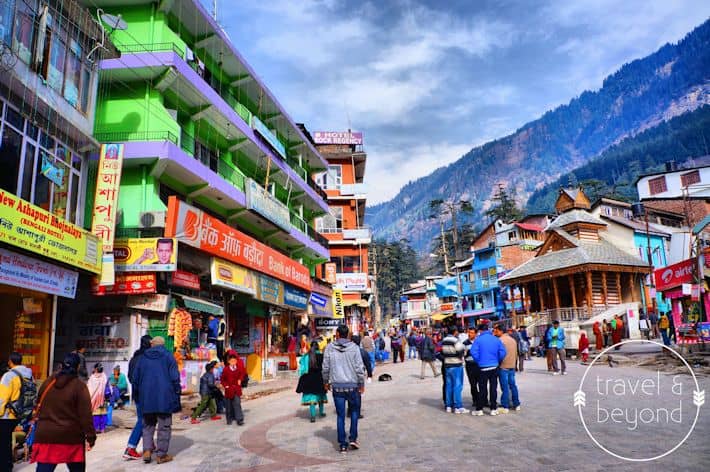 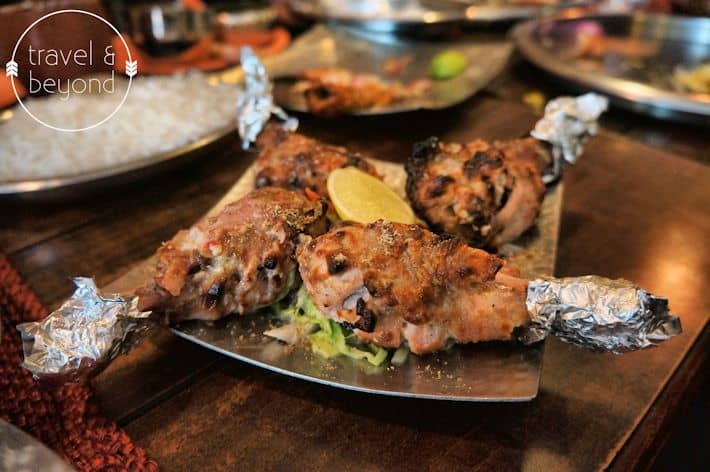 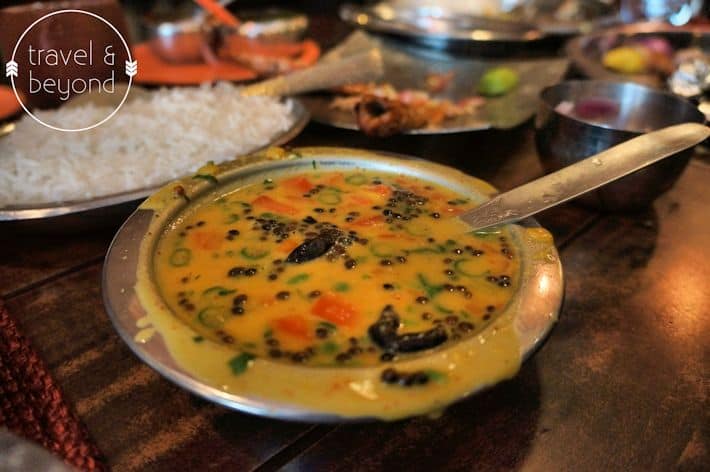 The best Punjabi food we had and it was in Manali! 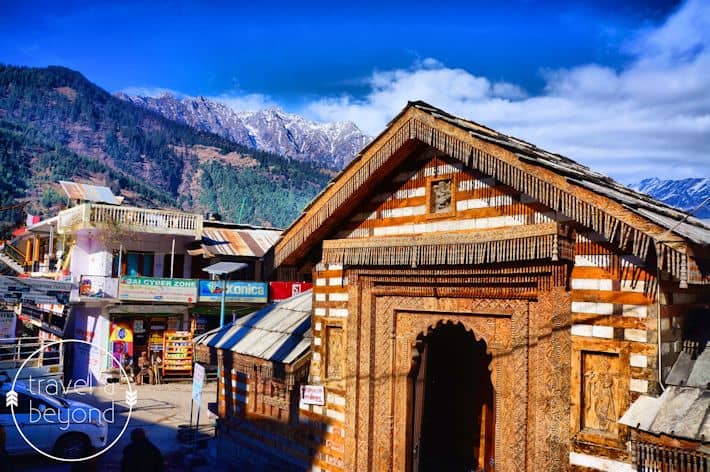 Vashist, a small village located on the left bank of river Beas towards Rohtang Pass is visited for its hot springs and temples 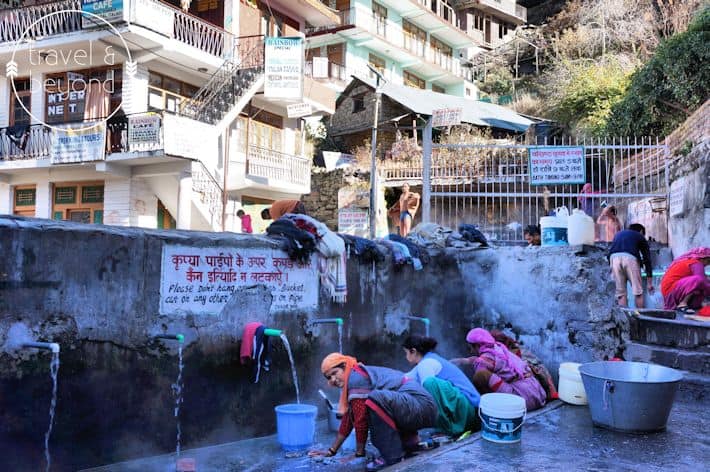 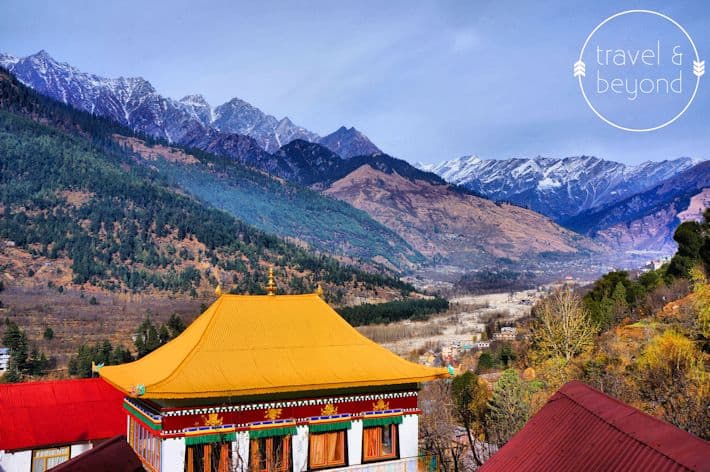 I could sit and stare at this scenery for hours… 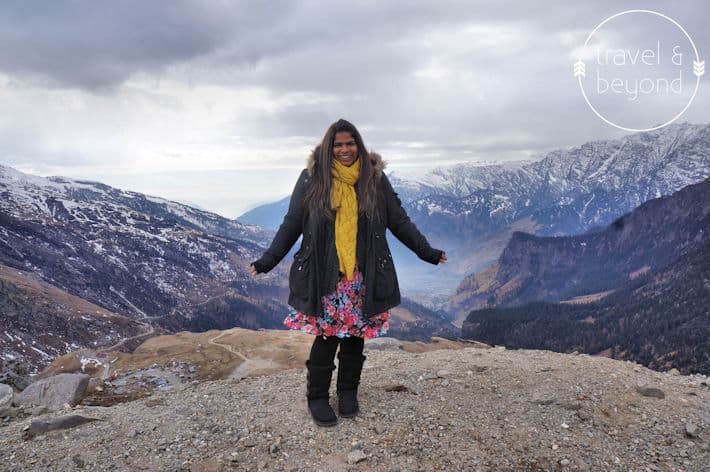