Prambanan – Where Ancient Kingdoms Once Worshipped

As my aircraft descended onto the vast plains of Yogyakarta on the island of Java, Indonesia, the first thing that struck me was the majestic sight of the Prambanan Temple standing tall, proud and somewhat mystical surrounded by lush green paddy fields and plantations.

Located 19 kilometres or a 15 minute drive from the city, Prambanan is a complex of Hindu temples dedicated to the Gods Shiva, Brahma and Vishnu. These colossal structures were built by the Sanjaya Dynasty that ruled the ancient Javanese kingdom of Mataram. With the introduction of Islam throughout the nation and the vanishing of the old ways, the Prambanan site was never to be used again.

With many years of neglect, it was in 1733 that the Prambanan Temples were rediscovered by Dutchman, CA Lons followed by Collin Mackenzie in 1811. Since its discovery and restoration in the 1930s, these Hindu temples are regarded as the most impressive throughout the Indonesian isles and designated as a UNESCO World Heritage Site since 1991.

Once home to a total of 237 temples both large and small, I can’t help but be impressed. Once playing an important spiritual significance in Mataram, the sheer height and elaborate architecture gives an impressive welcome. 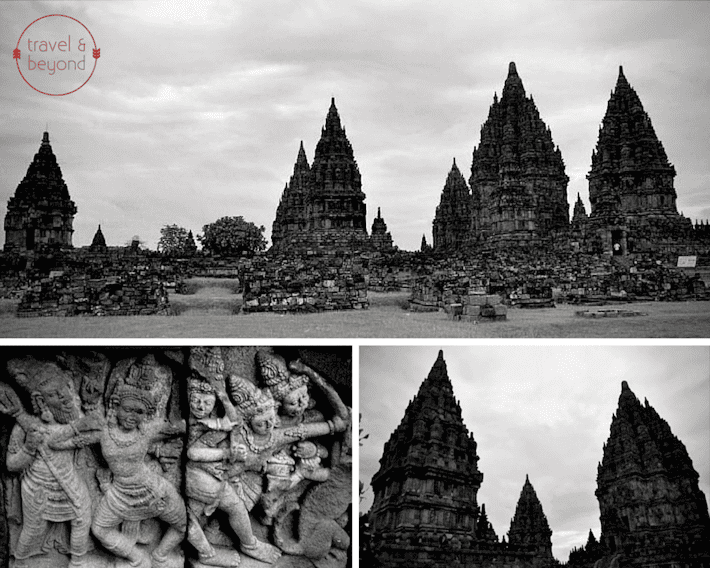 With sharp and jaggedly sculpted towers (gopuras) that are rectangular in plan topped by a barrel-vault roof, Prambanan is the largest Hindu temple in South-East Asia. Today, most of the smaller to medium size temples have deteriorated or have been looted leaving just scattered stones, many of which are seen as you walk towards the main entrance.

The remaining attractions are the six temples of the central court, richly decorated with carved reliefs of animals and Gods. Out of the six, three of them are dedicated to the Gods while the other three are dedicated to the God’s vehicles or mount (Vāhana). These mounts are Nandi (Bull), Angsa (Swan) and Garuda (a large Eagle).

The three main temples represent Trisakti or Trimurti, a concept in Hinduism in which the cosmic functions of creation, maintenance and destruction are personified by the forms of Brahma the creator, Vishnu the preserver and Shiva the destroyer.

The most significant being the Shiva temple that is flanked to the north by the Brahma temple and to the south by the Vishnu temple. At 34 meters at its base and rising to a height of 47 meters, the Shiva Temple is the largest chamber that contains a statue of himself to the east, the sage Agastya to the south, Lord Ganesha (his son) to the west and Goddess Durga (his wife) to the north.

The temple of Brahma has only one statue of himself inside situated right at the top and it’s the same with the temple of Vishnu. Brahma is traditionally depicted with four heads, four faces and four arms that represent the four Vedas – Rik, Sāma, Yajuh and Atharva. Vedas are a large body of ancient Sanskrit text originating from India that contains the oldest scriptures on Hinduism.

Also seen ornamenting at the base of the temples are statues of lions. Many Hindu’s believe that the lion is an avatar (embodiment or personification) of Vishnu. These ancient masterpieces of ancient Hindu architecture are simply overwhelming with extremely steep steps that will have you crawling on all fours as you reach the very top flight of stairs, gaining access to the holiest chamber where the Gods reside. Be cautious as it can be very slippery at some parts and a fall down those steps can be very detrimental.

The chamber of Gods and Goddess would have not been accessible to the common man back in the day. It would only be accessible by Hindu priests who perform religious rights on behalf of the people. While the exteriors of the temples and the balustrade areas within the central square are dense with carvings, the Shiva temple is famous for 62 relief depictions of the Ramayana that narrates the story and the eternal love epic of Rama and Sita.

Picturing what Prambanan would look like back in its glory days is simply breath-taking in my mind. Walking away from the colossal structures left me with thoughts of narrow walkways and walls lit with a thousand oil lamps as darkness seeps in, the temple courtyards filled with pilgrims and vendors selling flowers and offerings for the Gods and the scent of incense filling the air as the pale stone walls are adorned with colourful decorations. 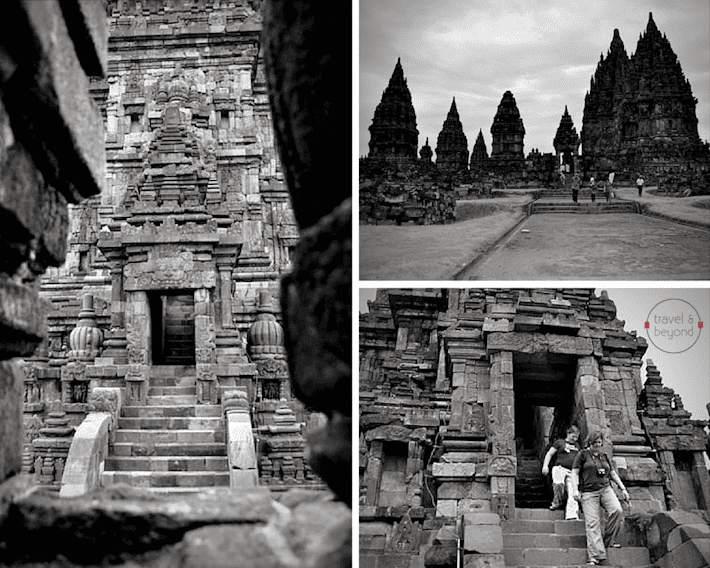 Travellers seeking an in depth narration of the monument’s history and religious significance can opt to take on a local guide which can be arranged at the ticket counter for a fee. Open daily from 6am to 5.30pm, tickets cost approximately USD18 per person.

Getting there is easy; a one way journey by taxi could set you back about USD20, although finding a taxi to get back to your hotel can be rather difficult. The best option would be to rent a car and driver for just a day, which most hotels can easily provide. Make sure to negotiate the fare beforehand. You can choose to keep the same driver to take you on to the striking Borobudur Temple in the Magelang District the next day.