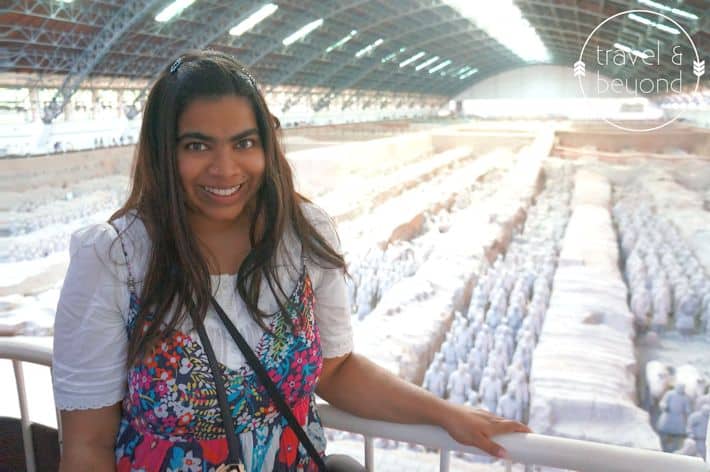 Unfortunately, through sheer coincidence, my visit was timed at the same time as the Zimbabwean President Robert Mugabe’s visit to the Museum of Terracotta Warriors in Xian, in northern China’s Shaanxi province. I grumbled and muttered under my breath as I waited for my turn to behold the magnificent statues that took 38 years and 720 thousand builders to build. With every entry cordoned off by security personnel, I wasn’t even sure if I would get to see the warriors.

There were security guards everywhere, every path was blocked, and getting to the entrance of each terracotta warrior pit was an obstacle. There are three pits in total that are accessible to the public. Each pit, the size of a football field stayed hidden for more than 2000 years. I waited anxiously in the sweltering sun waiting for my turn…

This amazing necropolis sat towards the east of Emperor Qin’s tomb which has not been excavated till date. The sole purpose for the existence of these warriors and cavalry was to accompany the emperor in his eternal rest. I kept reading about the warriors on my phone as I sat in the blazing sun waiting for the President to leave!

Finally Mr. President did leave after a four hour wait! I rushed into Pit 1 along with the hordes of local Chinese tourists who literally shoved me away from their path. I tried to squeeze my way towards the railing for a better photo opportunity but to no avail. I then figured if I could wait 4 hours in the sun, I could give the local tourists their space. 15 minutes later, I practically had Pit 1 to myself. Yep in 15 minutes the tourists cleared the pit. It appeared that they were there just to glace and move on but I on the other hand planned no such thing.