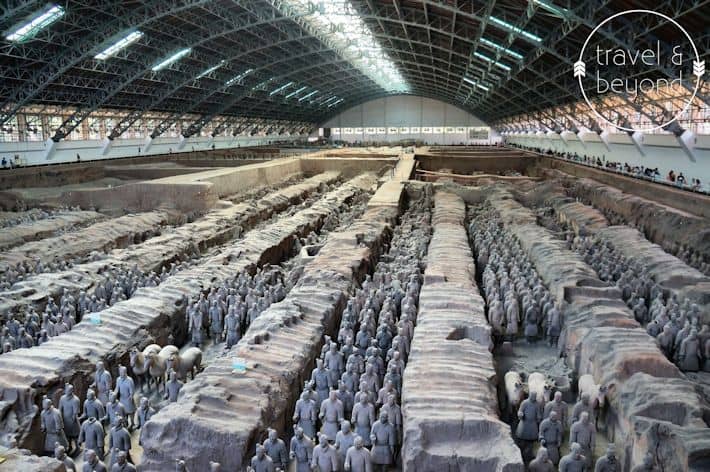 I stood alone in the pit with the army in front of me. They are life sized and each one seemed to have its own distinctive facial features. This means that they have all been individually crafted and not made from some mould. My imagination was running wild and my fingers were clicking pictures away. Some of them were looking at me with stern eyes, some with curiosity, some with disinterest, some with anger, some with mirth and some with sadness. But they stood steadfast, guarding a tomb for more than twenty centuries.

I noticed the intricate detail of the body armour worn by the warriors, even the soles of the shoes of the kneeling warriors are modelled with fine tread patterns. Each face was different, some even with different hairstyles too. Imagine the effort put into their creation. It is said that Emperor Qin, had a fanatical fear about death and an obsessive quest for the secret of immortality. His craze for everlasting life has provided us the legacy of the terracotta warriors.

My own reaction cannot be described. Honestly I was somewhere in between being awestruck and mesmerised at the same time. I was lost in an imaginary world. If that army could march, it would shake the very ground I stood upon. I looked at the slopping entrances that were sealed shut. What a leader Emperor Qin must have been. People may have trembled in his presence. His vision and tactical strength made him China’s first emperor!

Did you know it was Emperor Qin who started building The Great Wall of China (built between 220–206 BC)? He is a fascinating personality whose administration and policies have outlasted the ages and still followed today. You should read about him someday when you have the time.But better still my friends. Go see those warriors in their rugged surroundings. Like me you will come back with a profound experience and have a few tales of your own to tell.